The Cloister: A mouthful of the province

The organization of a festival such as Gravite, which is dedicated to time travel, allowed us to transport ourselves to the future last Wednesday night and to taste the menu Rafael Arroyo (a member Spanish Cuisine Selection) has prepared for the summer season. 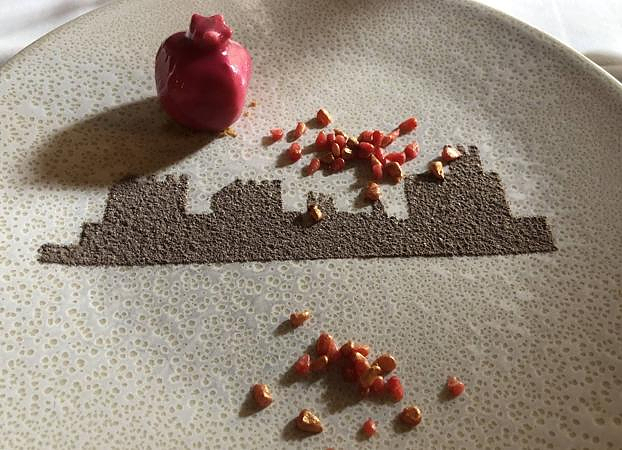 The organization of a festival such as Gravite, which is dedicated to time travel, allowed us to transport ourselves to the future last Wednesday night and to taste the menu Rafael Arroyo (a member Spanish Cuisine Selection) has prepared for the summer season. It was a beautiful night, and 25 hungry gastronauts gathered at the Imperial Table in the Cloister of Hotel Santa Paula to sample the creation of one of the greatest chefs of Granada.

The pairing of the first two courses with the 1925 Cervezas Alhambra was a great idea. After spending about two hours touring the Santa Paula hotel's interiors, it was great to begin dinner with a refreshing, cold beer. The wines are better if they arrive later.

Rafa said that he wanted to expand the scope of the menu's beginning. He didn't want to stop at the first taste of oil and bread with which most of today’s lunches or dinners start. It's also a game of absentmindedness. His proposal starts with a surprising slaughterbread, which symbolizes the Eastern Mountains. It is presented as a sponge cake with what appears to be chocolate on the side. However, it is actually a liquid blood sausage which, when soaked in Brioche, provoked the first "ohhhhs" of the night.

Rafael Arroyo is now out of the kitchen to prepare his next proposal, 'De tapas por granada. He said, "I am very vindictive about Granada tapas. I like to explain the dish to myself. However, the room team does it better than I do." He pointed out that the tapa should be easy to eat with your hands and can be consumed in one or two bites. It was: Trevelez ham, Montefrio cheese, and the spherification from Montes Orientales olives that caused a wave of "ohhhhhhhhhs!" The new version is just as enthusiastic as its predecessor.

Next came the Mundo Al andalus tapas. It was a wonder that the basil hummus and babaganoush could transport you from the future to the distant past.

Next, we visited the Lecrin Valley on our gastronomic adventure through the provinces of Granada. This was thanks to bluefin tuna in caldillo remojon Granada and oranges from El Valle. Alvear 3 Miradas was the wine of choice here. Montilla Moriles wine

Next destination: Riofrio. It finally gets the attention it deserves in a Granada gastronomic meal! We were able to taste the Riofrio caviar and the Riofrio smoked trout mousse, and also the bite of toasted butter and Japanese nigiri which allowed us to appreciate the many textures and flavors of local products.

Rafael Arroyo offers shrimp gnocchi emulsified in its coral to enjoy the Costa Tropical. This is a festival sponsored by CaixaBank. We were able to taste the Aixa, a Bodegas Fontedei rose, during this portion of the journey.

The meat was lamb cheeks from Loja, in its juice with asparagus of Huetor Tajar. This is Poniente Granada's tribute. This was a very delicious bite, and it was accompanied by Barbadillo nude 2021, made with the tintilla wine from Rota. It provoked a lively wine discussion, to the point where one faction organized itself into the vindictive "tintilla group".

Dessert: Granada at Alhambra viewpoint. Trompe l’oeil of a Pomegranate made with yogurt and beetroot. The profile of the Nasrid fortress is visible in the background. Monica Quiros, El Claustro's sommelier, was able to suggest a delicious and surprising Sauci S’ Naranja from El Condado de Huelva for a sweet end. After dinner, we left the Cloister to go to El Condado de Huelva for the last time.

‹ ›
Keywords:
ClaustroBocadosProvincia
Your comment has been forwarded to the administrator for approval.×
Warning! Will constitute a criminal offense, illegal, threatening, offensive, insulting and swearing, derogatory, defamatory, vulgar, pornographic, indecent, personality rights, damaging or similar nature in the nature of all kinds of financial content, legal, criminal and administrative responsibility for the content of the sender member / members are belong.
Related News