The Amazon is burning at the 'new frontier of deforestation'

It is a forked-tailed kite (Elanoides forficatus), a raptor whose tail resembles that of a swallow. 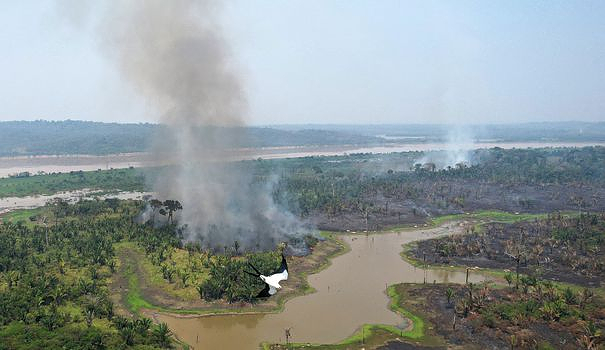 It is a forked-tailed kite (Elanoides forficatus), a raptor whose tail resembles that of a swallow.

The scene takes place in the state of Rondonia (north), one of the most affected by forest fires, in an Amazon which had never burned so much in August for 12 years, with 18% more homes than during the same period last year.

The most critical area is more precisely located at the junction of three northern states, Amazonas, Acre and Rondonia, on part of their respective territories.

A region almost as large as Spain, known as Amacro, an acronym for these three border states, whose authorities last year launched a controversial "sustainable development zone" project, with the support of the federal government of far-right President Jair Bolsonaro.

According to the NGO Greenpeace, despite this name, it is above all a question of "stimulating agricultural production" in this region where approximately 1.8 million inhabitants live.

"This is the new frontier of deforestation," insists Romulo Batista, spokesperson for Greenpeace, with whom an AFP team flew over the region.

The area has "concentrated 40% of the fires identified since the beginning of the year in the Brazilian Amazon", he underlines.

In places, the smoke is so thick that the pilot's visibility is very reduced. The burning smell is borderline unbearable.

In the areas already destroyed, a landscape of desolation as far as the eye can see, with whole sections of black or dark gray ground, instead of the thick emerald green vegetation coat.

And in those that are still burning, the flames distributed in hearths a few tens of meters from each other act as fatal beacons in the middle of the cloud of smoke.

At night, seen from above, these fires look like small erupting volcanoes.

For the inhabitants of Porto Velho, capital of the state of Rondonia, this month of August has been particularly difficult.

"I have the impression that there was three times more smoke than last year. It is harmful, especially for children who have respiratory problems", laments Francisco Alan Ferreira da Silva, driver of 33 year.

"It's horrible, in the morning there is a huge fog, the sun is all red and it's very hot. And when you open the window, you can see particles of ash entering the room", adds Joyce Milena, 24-year-old administrative assistant.

Deforestation and forest fires have seen a sharp upsurge under President Bolsonaro, who is seeking re-election in a month.

Since he came to power in January 2019, the average annual deforestation in the Brazilian Amazon has increased by 75% compared to the previous decade.

He brushes aside criticism by arguing that Brazil “preserves its forests much better than Europe”, in particular with reference to the fires which ravaged France and Spain this summer.