The 37th "Alcazaba" National Championship of Local Police will be held in Las Gabias, Churriana De la Vega, and Maracena 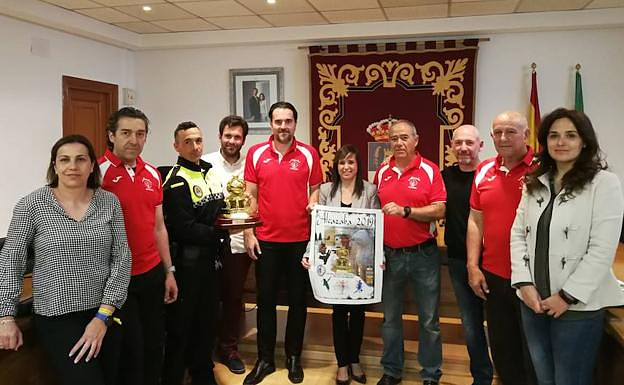 From April 3rd to 7, the 27th edition of 'Alcazaba’ National Championship of Local Police (National Championship of Local Police) will be held in the province of Granada. The organization decided this year to distribute all activities in three locations within the Metropolitan Area to host the five days of competition. This sporting event will feature 20 teams of police officers representing cities like Valencia, Seville and Malaga.

The main venue for the majority of the tests will be Las Gabias. Churriana De la Vega will provide the soccer courts. The different athletics events will also be held in Maracena. This is a prestigious national competition for security forces. It features events in different sports such as soccer, paddle tennis, and police shooting.

This championship will gather members of state security forces and other bodies. To present the poster and other activities, the organization visited the various Town Halls.

The championship was presented at the Las Gabias Town Hall by Manuel Morente, president of the organizing board. He highlighted the "unbeatable sports facilities in Las Gabias, and the firm commitment made by its Government Team to security forces and bodies and this championship makes this city an unbeatable location for the celebrations of this prestigious event>>.

Vanessa Polo, Las Gabias' mayor, stated that it was a great honor to host the championship. She also mentioned that the competition is an occasion in which the Metropolitan Police officers have participated for many years and have always been fully involved. This event is sure to be a success in terms of participation and sport.

More than 200 agents took part in the last edition. This will increase the number of people visiting the Granada cities. The trophy distribution gala will take place at the Mae West nightclub, Granada, on April 6.

‹ ›
Keywords:
GabiasChurrianaVegaMaracenaSedeCampeonatoNacionalPoliciasLocalesAlcazaba
Your comment has been forwarded to the administrator for approval.×
Warning! Will constitute a criminal offense, illegal, threatening, offensive, insulting and swearing, derogatory, defamatory, vulgar, pornographic, indecent, personality rights, damaging or similar nature in the nature of all kinds of financial content, legal, criminal and administrative responsibility for the content of the sender member / members are belong.
Related News