Strasbourg presents itself as the capital of Christmas

Capital of Europe: This is the name given to Strasbourg, which is also the capital of Alsace. 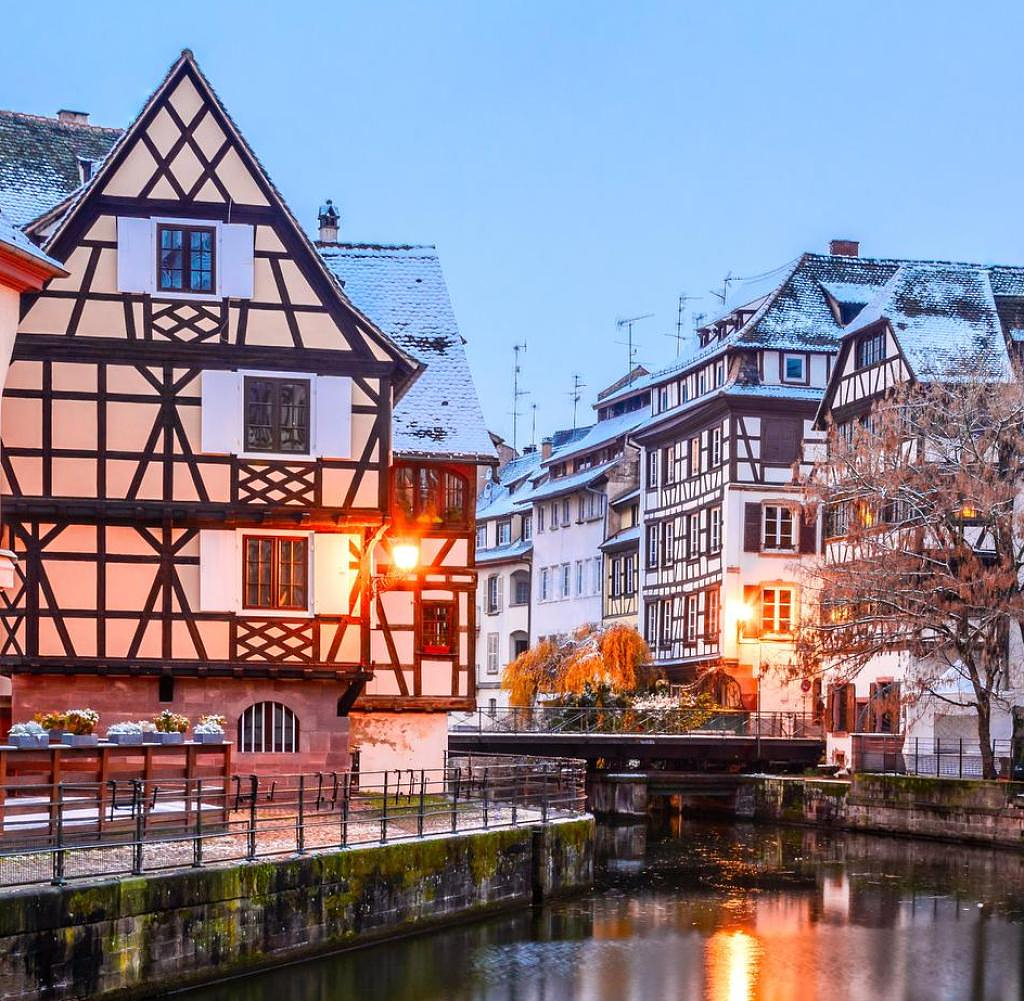 Capital of Europe: This is the name given to Strasbourg, which is also the capital of Alsace. Just five kilometers separate the French city from southern Germany on the other side of the Rhine - an ideal destination for a city trip on rails. Which is also a journey through time.

Because not only European institutions like the Parliament, the Council of Europe or the European Court of Human Rights make Strasbourg special. The history of the city goes back over 2000 years to Roman times. The historical buildings of the different epochs make up a large part of the cityscape. There are even finds from Roman times, which can be seen in the Archaeological Museum.

A visit is particularly worthwhile in winter: This is when the city, which was German-speaking for a long time, celebrates Christmas markets and Christmas trees - and presents a cultural heritage that it still shares with Germany today.

Even the main train station puts visitors in the right mood for the mixture of tradition and modernity. Most of the Strasbourg-Ville train station dates from 1883: it was the first major building to be erected in the Alsatian metropolis after the Franco-Prussian War, in the wake of which Strasbourg was returned to Germany – in the Wilhelmine style. The first fully electrically lit large train station was a sensation at the time, including for travelers on the Orient Express, which stopped in Strasbourg.

The reception hall with the stucco facade and the historic train station are now listed buildings. A huge glass vault was added in 2007: an additional reception hall that the French railways donated to the city when it was connected to the TGV super express train network.

TGVs, but also ICEs, travel from Frankfurt/Main to Strasbourg without changing trains. But you can also travel comfortably from the Baden-Württemberg border town of Kehl via the Rhine, either with the Regiobahn or, since 2017, with the newly built cross-border tram line D.

The old town is easily accessible on foot from the train station: in ten minutes, visitors are right in the Middle Ages on the Grand Île, which is embraced by two arms of the river Ill. In 1988 it was the first old town to be declared a UNESCO World Heritage Site. In 2017, Wilhelmine Neustadt was added, which is called La Neustadt in French. Unesco praised the unique urban ensemble, which was characterized by "French and Germanic influences".

A ride in one of the heated panoramic excursion boats that cruise around the old town island offers a beautiful overview. You can listen to audio guides in twelve different languages, such as German and French, but also in the local Alsatian dialect.

If there is no snow, a bicycle tour is recommended for sightseeing beyond the old town. Thanks to a network of cycle paths over 670 kilometers long, tourists can easily pedal to both the European institutions in the north and the village-like town of Krutenau in the south. The 26-hectare Orangery Park and the many idyllic paths along the foothills of the Ill in western Strasbourg are also attractive.

The jewel of the old town is the Kammerzell-Haus in the shadow of the Strasbourg Cathedral, a half-timbered eye-catcher from the late Gothic period, today it houses a restaurant and a hotel. Built around 1427, it is often incorrectly referred to as the oldest residential building in Strasbourg.

But that is hidden around 300 meters further in the middle of winding alleys: the banana-yellow tower on the Liebenzeller family's home was built around 1300. Although the building cannot be visited officially, as a guest of the restaurant "L'Épicerie" you can try to get hold of the only table on the ground floor of the tower - and enjoy tartines, the French version of sandwiches, in a historical atmosphere.

Strasbourg is known for its many half-timbered houses, the best known is the former miller's and tanner's quarter in the south of the old town with its characteristic pointed roof houses from the 16th and 17th centuries. Today the district is called La Petite France (Little France) and is a popular photo motif:

However, the most famous attraction remains the Strasbourg Cathedral of Our Lady. Built between the 12th and 15th centuries, it combines Romanesque and Gothic styles. Its asymmetry is characteristic - the originally planned south tower was never built, the imposing north tower measures 142 meters, until 1874 it was the tallest building in the world. Climbing the 330 steps to the viewing platform is worthwhile: when the visibility is good, you can see over the city and the Rhine to the Black Forest.

During the Advent season, the squares and alleys around the cathedral are transformed into a sea of ​​lights - that's when Strasbourg's Christmas market, one of the oldest in Europe, takes place. It has existed since 1570 when the city was still German-speaking.

Over the centuries, French influences have also sweetened the pre-Christmas magic, which to this day - typically Alsace - combines the best traditions of both cultures. Around 300 stalls offer Alsatian handicrafts and Christmas decorations, gingerbread and foie gras, bredele (the typical Alsatian biscuits) and berawecka, a bread made from dried fruits. To warm up, drink white mulled wine made from local Riesling or Silvaner.

A magnificent Christmas tree sparkles on Place Kléber, growing at least 30 meters high every year. It is spruced up with branches of other fir trees and decorated with seven kilometer long chains of lights - Strasbourg is doing a lot to stage itself as the "Christmas capital". The Christmas tree is deliberately celebrated as an Alsatian cultural asset: the region claims to have invented it; the custom was first mentioned in writing in 1521 in Sélestat in Alsace.

The stately town houses in Parisian style also shine with lights during the Advent season. They were created after 1681, when Strasbourg was occupied by France under Louis XIV. The Palais Rohan, built in the 18th century, now houses art and archeology museums worth seeing.

The new town, on the other hand, impresses with buildings in the Wilhelmine historicism style. With tree-lined boulevards and imposing buildings, it was intended to make Strasbourg the flagship of the Reichsland Alsace-Lorraine. After World War I and World War II, when the city was re-annexed to France, that architectural German heritage remained, long alienated, but Strasbourg residents are now proud of this part of their city's history as well. Must see: the Republic Square, lined by the Rhine Palace, the National Library and the National Theater.

A nice contrast to this is the modern Europaviertel a little further north with the European Parliament, the Council of Europe and the European Court of Human Rights. The contemporary buildings catch the eye from afar. The parliament including the plenary hall can be visited free of charge and without reservation - only the identity card has to be shown.

One of the oldest hotels is the "Maison Rouge" in the old town. It dates back to 1387, but the old location on Place Kléber was abandoned in the 1970s and the five-star establishment moved to an imposing brick building 150 meters away. The wellness and spa area with sauna and hammam is also accessible to non-hotel guests - ideal for warming up in winter (double rooms from 321 euros, maison-rouge.com/de).

Those who prefer to live in a modern style can book the design hotel “Okko” on the Malraux river peninsula. The facade shimmers in dark blue and white, the interior of the four-star hotel is characterized by large windows, lots of light and futuristic furnishings (double rooms from 121 euros, okkohotels.com).

In Strasbourg you can taste the variety and sophistication of the Alsatian regional cuisine. The "Chez Yvonne" (restaurant-chez-yvonne.net/de), for example, offers local specialties such as calf's head and sauerkraut in a rustic inn atmosphere. In 1995, French President Jacques Chirac and Federal Chancellor Helmut Kohl dined here.

In "Au Crocodile" (au-crocodile.com), on the other hand, modern French star cuisine with a regional touch is served - the menu currently features Alsatian pigeon with figs or porcini mushrooms and artichokes with Burgundy truffles. Of course you can also get Alsatian tarte flambée.

The "La Fignette" bistro serves the best quality, where they are prepared over a wood fire (lafignette.com). If you are really hungry, you can also order other hearty specialties from Alsace here: such as Waedelé, knuckle of pork stewed in beer.

All of the restaurants mentioned serve good Alsatian wines – from Gewürztraminer to Riesling and Edelzwicker to Muscat. However, one specialty is nowhere on the menu: the oldest white wine in the world.

It is stored in the historic wine cellar of the Strasbourg hospital. It is said to date from 1472. It can no longer be drunk, the acidity is too high. However, visitors are allowed to smell the cork of the wine barrel. The aroma is woody-smoky with hints of vanilla, coconut and fresh herbs. Some of it evaporates every year, which is why around four liters of Riesling or Silvaner are added to the barrel - otherwise the oldest white wine in the world would soon disappear completely into thin air.

Participation in the trip was supported by Alsace Destination Tourisme and Office de Tourisme de Strasbourg. You can find our standards of transparency and journalistic independence at axelspringer.com/de/Werte/downloads.

‹ ›
Keywords:
FrankreichLänderporträtsElsassRegionenporträtsStraßburgStädteporträtsStädtereisenWeihnachten
Your comment has been forwarded to the administrator for approval.×
Warning! Will constitute a criminal offense, illegal, threatening, offensive, insulting and swearing, derogatory, defamatory, vulgar, pornographic, indecent, personality rights, damaging or similar nature in the nature of all kinds of financial content, legal, criminal and administrative responsibility for the content of the sender member / members are belong.
Related News