Somalia: At least 100 dead in the double car bomb attack in Mogadishu

One hundred people were killed and 300 were injured, he said after visiting the site of the attack. 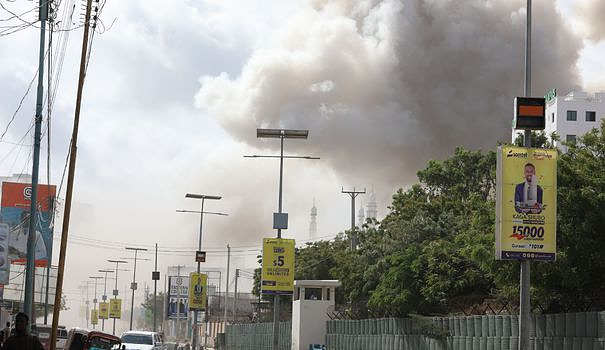 One hundred people were killed and 300 were injured, he said after visiting the site of the attack. The previous toll was 9 dead.

The president clarified that "the numbers of dead and injured both continue to increase".

Two cars packed with explosives exploded within minutes of each other in the afternoon near the busy Zobe junction, followed by gunfire in an attack targeting Somalia's education ministry.

The explosions shattered windows of nearby buildings, sending shrapnel and plumes of smoke and dust into the air.

The attack took place at the same busy intersection where a truck had exploded on October 14, 2017, killing 512 people and injuring more than 290.

"It's in the same place and it's the same innocent people" who are hit, lamented Mr. Mohamud. "It's not fair. God willing, they will no longer have the capacity to carry out a new (attack, like that of Zobe)", he lambasted, in reference to the jihadists of the Shebab group.

This type of attack - which was not immediately claimed - is generally attributed by the Somali authorities to Al-Shabaab jihadist militants who regularly carry out attacks in the capital and major cities of Somalia.

The Islamist group, linked to Al-Qaeda, has been fighting the federal government supported by the international community since 2007. It was driven out of the main cities - including Mogadishu in 2011 - but remains firmly established in large rural areas, especially in the south of the country.

"Ruthless terrorists killed mothers. Some of them died with their children trapped on their backs," Somali police spokesman Sadik Dudishe said earlier.

He added during a press briefing that the attackers had targeted "students and other civilians".

According to a witness, Abdirahman Ise, there were many people on the road alongside the ministry at the time of the first explosion.

"I saw a lot of smoke around the ministry and a lot of damage," said another witness, Amino Salad. The explosions blew out the windows of nearby buildings, according to police and witnesses.

Security officer Ahmed Ali, among the first to arrive on Saturday, said he "saw the bodies of nine people, mostly civilians including women and children".

Al-Shabaab claimed responsibility for the attack last week on a hotel in the port city of Kismayo that left nine dead and 47 injured.

In recent months, the Shebab have redoubled their activity in Somalia, a poor and unstable country in the Horn of Africa, with in particular a spectacular assault, lasting around thirty hours, at the end of August on a hotel in Mogadishu.

After this attack which left at least 21 dead and 117 injured, President Hassan Cheikh Mohamoud promised a "total war" to eliminate the Shebab and called on the population to "stay away" from areas controlled by the Islamists who would be targeted by future offensives.

The security forces and local clan militias have notably launched military operations in the center of the country, which, according to the authorities, have made it possible to regain ground from Islamist fighters.

In addition to the Shebab insurgency, Somalia is also threatened by an imminent famine, caused by the most severe drought observed for more than 40 years.

Across the country, 7.8 million people, nearly half of the population, are affected by the drought, of which 213,000 are in serious danger of starvation, according to the UN. Without urgent mobilization, a state of famine could be declared before the end of the year.