Route du Rhum: victory and record for Caudrelier after an express crossing

The 48-year-old navigator crossed the line in Pointe-à-Pitre at 5:02 a. 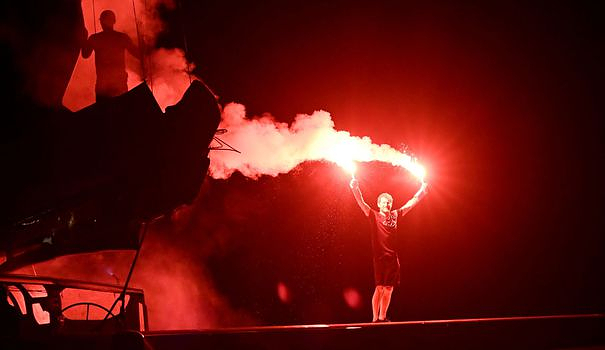 "I'm not even tired surprisingly. The race was exhausting, but I managed to find my rhythm well. I wanted to win this race so badly (...) I had never been able to do it. C It was a huge frustration," Caudrelier said after crossing the finish line.

Pursued by François Gabart (SVR Lazartigue) for several days, he did not tremble during the perilous tour of Guadeloupe, advancing at a steady pace to the legendary Basse Terre buoy, the last crossing point before the finish.

"There was a real fight with François, we both put in a lot of intensity. We talk about the record a lot, but that's normal because my boat is more recent than Francis's (...) Arriving a second ahead of François was enough for me", he explained on the pontoons.

Gabart, overtaken in the last moments of the race in 2018, was expected in a few hours at the finish. Thomas Coville (Sodebo) should complete the podium at the end of the day.

Charles Caudrelier, an experienced sailor laden with crewed trophies (3 Transat Jacques Vabre, 2 Volvo Ocean Race, 2 Fastnet Race), had never taken the start of the legendary transatlantic solo. Yet it was the childhood dream of this Finisterian, whose idol is the Swiss navigator Laurent Bourgnon, double winner of the event (1994, 1998).

He was the favorite at the helm of the Maxi Edmond de Rothschild, the first boat entirely designed to fly above water using foils, launched in 2017 and considered the Ultim (32 m maxi-trimaran long and 23 m wide) the most successful of the fleet.

"I found this boat crazy. It's a complicated sailboat, which we've always had to develop in the face of new boats. We had to stay ahead. Our team is a Formula 1 team and I I'm the driver, the rest of the year, lots of people working on it," Caudrelier said.

Charles Caudrelier rode a perfect race from the gunshot in Saint-Malo on Wednesday at 2:15 p.m., taking the lead from the first miles and leading the fleet to the finish.

When Gabart lost a few hours halfway through the race, he "did not take a screwdriver out of the crossing because the boat was extremely well prepared and performed well," said Caudrelier. For Gitana (Maxi Edmond de Rothschild), this is the second victory in the Route du Rhum, after the success of Lionel Lemonchois in 2006.

Behind the stars of the Ultim category, the fight continues for the skippers of the Route du Rhum who have had to face several depressions since the start, postponed for two days due to weather conditions.

For them, Guadeloupe is still a long way off (about 1,600 miles) and the first are not expected before Monday. The Ocean Fifty (15m multihulls) should precede them with an arrival scheduled for Sunday for Quentin Vlamynck (Arkema).

The Class40s (12.18m monohulls) and the historic Rhum class boats (Monohulls and Multihulls) will be the last to reach Guadeloupe.