Recognition of the excellence of seven companies that set an example for others.

The Local Association of Commerce, Industry and Services presented its traditional business awards in the various categories during a packed gala at the Ermita Madre de Dios complex. 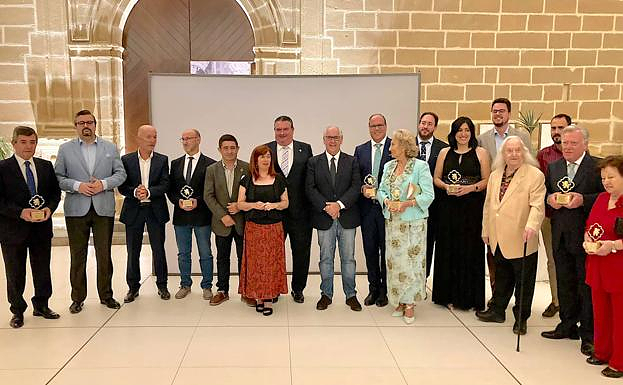 The Local Association of Commerce, Industry and Services presented its traditional business awards in the various categories during a packed gala at the Ermita Madre de Dios complex. Some awards were made through candidacies from the associates. These were later valued by the board of directors.

Icesur, an Ubetense company that was founded in 1992 and currently employs 14 people, has two locations in the town: one in Zurbaran and one in Poligono los Cerros. It includes a variety of commercial areas such as musical instruments, computers, lighting, and electrical appliances.

The industry award went to Asuncion Molina, who started her career in 1978 and has been a leader in Ubeda's plumbing, air conditioning, and irrigation sectors for over four decades. They currently employ 11 people.

This category corresponds to MMC Prevention. Delegations in Ubeda Cartagena, Malaga and Cartagena are dedicated to training and consulting, particularly in the area of occupational prevention. There are 22 employees.

Ermita Madre de Dios won the award for business initiative. She was the venue of the gala and is a reference in Spain's hospitality sector. It creates 26 jobs in this instance.

The trophy for business was presented to the pottery saga Tito (brothers Juan and Paco, along with their husband Melchor), who are heirs to a trade that has been transformed into art by grandfather Pablo Tito. They embody one the city's strengths, which is its craft.

Lorente Colodro won the award in the category of family businesses. Diego Lorente spent his entire life dedicated to the automotive industry. He started in Peal de Becerro at 16 and took over the father's workshop. He expanded his business to Jaen and Ubeda over the years, always being accompanied by his brother Paco, Maria del Mar, and Jose. They currently manage the local scrapyard and the Fiat and Renault dealerships located in Jaen, Ubeda and Jaen.

Tito Molina was an outstanding professional in the field of hotel management in Andalusian towns. He dedicated his last years to his great project and opened a hotel in his city. This would have been a personal and intimate way to serve his many friends who came to visit him every day, always accompanied his unbreakable Macarena.

Bartolome González, president of Alciser, stated that all winners are fully deserving these awards which acknowledge the hard work, projection, innovation, and history they have built in their respective fields.

Francisco Reyes, president of Diputacion was also present at the event, along with Francisco Javier Lozano, deputy for promotion and tourism. Reyes highlighted the positive work of the companies that were awarded with "benchmarks" of a Ubetense or Jaen business fabric. This has been strengthened thanks to the efforts and support of those who have chosen Jaen as the location to develop their projects. These business bets, according to the president of Diputacion, "contribute people being able live in one location because there are services and employment opportunities. This is why they help establish the population in this territory."

Antonia Olivares was proud of the city's business community. He said that the city is fortunate to have the headquarters of innovative and creative companies that offer extraordinary services. Many of these companies also keep the legacy of their founders or preserve the trade they were bequeathed. They are important in the development of the community and have a significant influence at both the national and regional levels.

‹ ›
Keywords:
ReconocimientoExcelenciaTrayectoriaSieteFirmasEjemploSeguir
Your comment has been forwarded to the administrator for approval.×
Warning! Will constitute a criminal offense, illegal, threatening, offensive, insulting and swearing, derogatory, defamatory, vulgar, pornographic, indecent, personality rights, damaging or similar nature in the nature of all kinds of financial content, legal, criminal and administrative responsibility for the content of the sender member / members are belong.
Related News