Pyongyang fires ballistic missiles for fourth time in a week

The South Korean armed forces said they had "detected two short-range missiles between 6:45 a. 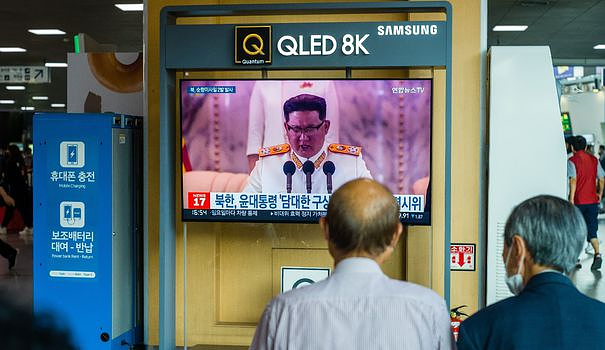 The South Korean armed forces said they had "detected two short-range missiles between 6:45 a.m. and 7:03 a.m. fired from Sunan area, Pyongyang" towards the Sea of ​​Japan.

The two machines "flew (a distance) of approximately 350 km, at an altitude of 30 km (and) at the speed of Mach 6", according to a statement from the South Korean Joint Chiefs of Staff, qualifying these shots of "serious provocation".

Japan also reported the obvious launch of two ballistic missiles, saying they appeared to have ended their course outside Japan's exclusive economic zones.

According to Japanese Deputy Defense Minister Toshiro Ino, the missiles "appear to have followed irregular trajectories".

"North Korea has stepped up its missile strikes at an unprecedented rate," he said.

Irregular trajectories indicate the missiles are capable of maneuvering in flight, making them harder to track and intercept, experts say.

The US command in the region said in a statement that these latest missile launches "highlight the ability to destabilize illegal weapons of mass destruction and ballistic missile programs" of North Korea.

US Vice President Kamala Harris was in Seoul on Thursday and visited the demilitarized zone (DMZ) between the two Koreas, on a trip to underscore Washington's "unwavering" commitment to defending South Korea against the North.

Pyongyang has stepped up its banned weapons programs as talks have long stalled, conducting a record number of weapons tests this year and revising legislation to make its status as a nuclear power "irreversible".

The United States has some 28,500 troops in South Korea to help it deal with the threat of an attack from its northern neighbor.

Since South Korean President Yoon Suk-yeol took office in May, the two countries have intensified their joint exercises, which they emphasize as purely defensive in nature, but which Pyongyang considers to be rehearsals for an invasion.

Shortly before Ms. Harris' arrival in Seoul, an American aircraft carrier docked in South Korea to carry out a joint naval exercise, in a show of force against Pyongyang.

Pyongyang is "rapidly modernizing its weapons and taking advantage of a world divided by the rivalry between the United States and China and the annexation by Russia of new Ukrainian territories", he adds.

US and South Korean officials have repeatedly warned that North Korean leader Kim Jong Un is preparing to conduct another nuclear test.

On Wednesday, South Korean intelligence estimated that it could take place between the next Chinese Communist Party congress on October 16 and the midterm elections in the United States on November 7.

North Korea, which is subject to UN sanctions for its weapons programs, generally seeks to maximize the geopolitical impact of its tests by choosing the moment that seems most opportune to it.

The isolated regime has tested nuclear weapons six times since 2006, the most recent being in 2017.