PSOE calls on Moreno Bonilla, the PSOE's representative to "today" and to "with his own means" in order to save Las Salinas

Jose Luis Sanchez Teruel (an autonomous deputy elected by PSOE of Almeria), this morning urged Juanma Bonilla (PP) to take immediate action and use the Board's resources to address the problem of dry up The Salinas de Cabo de Gata. 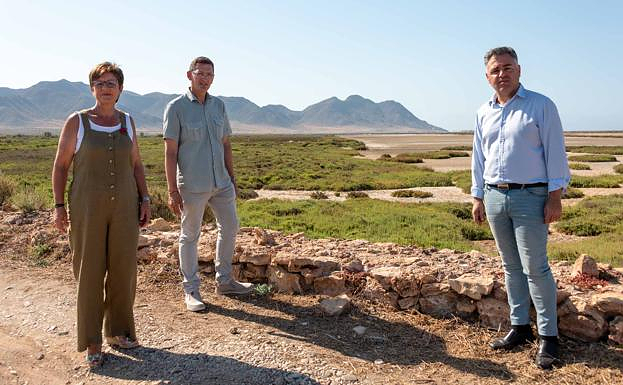 Jose Luis Sanchez Teruel (an autonomous deputy elected by PSOE of Almeria), this morning urged Juanma Bonilla (PP) to take immediate action and use the Board's resources to address the problem of dry up The Salinas de Cabo de Gata. These areas are badly damaged due to the "irresponsibility" of the Andalusian government. He stated that it was necessary for the Governing council to adopt the agreements.

Adriana Valverde Tamayo, the spokesperson of the Socialist Municipal Group of Almeria City Council visited the Cabo De Gata-Nijar Nature Park. He announced that the PSOE will register in parliament an initiative to demand that the Andalusian government act in face of this environmental catastrophe with all its resources. Sanchez stated that the most important thing is to act and not look the other way. They are the government and the environmental authority, so they must take action in the face this disaster. Teruel believes that if the Ministry of Sustainable Development had taken action in May when the canal that supplies seawater Las Salinas with was discovered to be in poor condition, there would have been no environmental problem today.

Sanchez Teruel believes that the Junta de Andalucia should and must guarantee water to the space and then pass on the money spent to avoid an environmental disaster to whoever it corresponds, while protecting the environment and value of the space.

The Andalusian parliamentarian of the PSOE of Almeria, on the other hand, has reproached Carmen Crespo, Minister of Agriculture, Fisheries and Sustainable Development, for having "cold blood" to commemorate World Environment Day in Las Salinas. They went there to visit a site that was severely damaged by an environmental problem. He said that a responsible government would have told the truth instead of hiding the problem and set out the steps it was going to take to stop it from happening again. However, he was wrong.

Socialist regional deputy says that such situations also show how important a Ministry of the Environment are, as the Ministry of Agriculture took its powers and dissolved it. This has resulted in no environmental policy that prevents natural spaces deteriorating and losing their value, protecting them tooth and nail, and acting.

The silence of Almeria's mayor

Adriana Valverde, for her part, has lamented the "inaction” of Almeria's mayor in the face what is occurring in Las Salinas de Cabo de Gata. She demands that she openly share with public opinion "what contacts you have made with the Junta de Andalucia in order to try and solve this very serious environment problem. We want to know when this happened and why you have kept it from societyrecalling that a councilor of the Government team, PP, his usual residence in this area

Socialist spokesperson Announces that her group will ask questions at the municipal plenary to clarify what happened. She also expressed concern about a star project of Almeria City Council such as the Plan of Tourism Sustainability In Destinations 'Cabo de Gata - Paradise for Active Tourism. Almeria is gambling, with an investment of over 3 million euros. This enclave has its greatest claim to its ecological, landscape, and faunal diversity," as stated by the project presented by the town hall to the Ministry of Tourism in order to access European funds.

‹ ›
Keywords:
PSOEInstaMorenoBonillaActuarMediosPropiosSalvarSalinas
Your comment has been forwarded to the administrator for approval.×
Warning! Will constitute a criminal offense, illegal, threatening, offensive, insulting and swearing, derogatory, defamatory, vulgar, pornographic, indecent, personality rights, damaging or similar nature in the nature of all kinds of financial content, legal, criminal and administrative responsibility for the content of the sender member / members are belong.
Related News