A video widely circulated on the internet and which AFP has geolocated in Shanghai shows some protesters shouting "Xi Jinping, resign!" and also to attack the Chinese Communist Party, a very rare demonstration of hostility against the president and the regime in the economic capital of the country, subjected at the beginning of the year to an exhausting two-month confinement. 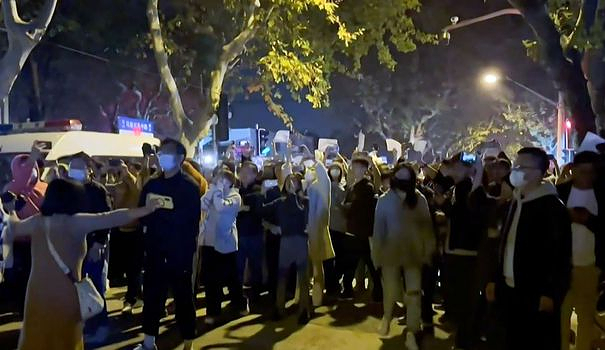 A video widely circulated on the internet and which AFP has geolocated in Shanghai shows some protesters shouting "Xi Jinping, resign!" and also to attack the Chinese Communist Party, a very rare demonstration of hostility against the president and the regime in the economic capital of the country, subjected at the beginning of the year to an exhausting two-month confinement.

This protest took place at dawn in Wulumuqi Street - the Mandarin name of the city of Urumqi in Xinjiang (west) where ten people died in a fire on Thursday. Many posts circulating on social networks in China accuse the anti-Covid measures of having aggravated this tragedy by slowing the arrival of help.

A person who took part in the protests in Shanghai told AFP, on condition of anonymity, that he arrived at around two in the morning at the rally. "A group of mourners laid flowers on the sidewalk, another group chanted slogans," said this witness.

"There were a few minor scuffles but overall the policing was civilized," he continued. "It's crazy to know that in these circumstances there are still so many brave people who stand out," he exclaimed.

Video taken by a witness showed a large crowd shouting while waving sheets of white paper - symbolizing censorship - in front of several cordons of police. Several witnesses reported that at least two people were taken away by the security forces.

Sunday during the day, the neighborhood had become quiet again, under a strong police presence. An AFP reporter saw people carrying flowers being approached by police and leaving.

- Vigil at the university -

Several hundred students from the prestigious Tsinghua University in Beijing also demonstrated on their campus on Sunday, according to an eyewitness interviewed by AFP and images posted on social networks.

"At 11:30 a.m. (0330 GMT), students started holding signs at the entrance to the canteen. Then more and more people joined them. Now there are between 200 and 300 people. We sang the national anthem and the International and chanted: freedom will triumph," the student told AFP.

Vigils in memory of the Urumqi victims have been held at other universities across the country, including the equally prestigious Peking University, according to a student who attended.

According to this witness, slogans against the "zero Covid" policy were drawn on a wall of this university, the protesters began to gather on Saturday evening around midnight on campus, and the crowd reached between 100 and 200 people around two hours of the morning.

“I heard people shouting: no to Covid tests, yes to freedom”, he said, showing AFP photos and videos corroborating his statements.

Videos on social networks also showed an important vigil at the Nanjing Institute of Communications (east) where participants also brandished sheets of white paper. Other videos, the authenticity of which AFP was unable to confirm, showed other small protests in Xian (center), Guangzhou (south) and Wuhan (center).

Authorities were quick to restrict online discussions of the protests and delete videos.

Weariness is growing in China against the draconian policy to fight the pandemic. Sporadic and sometimes violent protests have already taken place in several other cities in recent days, including at the world's largest iPhone factory in central Zhengzhou, as well as in Urumqi after the fire.

Despite several vaccines available, and contrary to the rest of the world, the Asian country continues to impose massive confinements as soon as the slightest case appears, to place people who test positive in quarantine in centers and to require quasi-PCR tests. - daily newspapers for access to public places.

A number of high-profile cases in which emergency services were allegedly slowed by health restrictions, with fatal consequences, have fueled discontent.

China recorded 39,506 Covid cases on Sunday, a daily record that remains very low compared to figures recorded elsewhere in the world at the height of the pandemic.