Place your bets on the culture of the villages

Caldea festivals are a Department of Villages initiative that is "greatly accepted by the public". 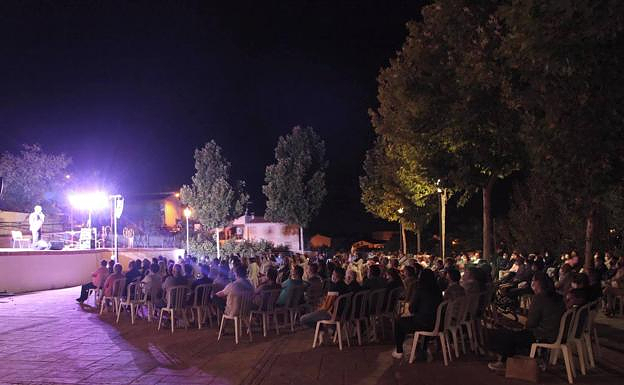 Caldea festivals are a Department of Villages initiative that is "greatly accepted by the public". Angel Montoro (the area's head) announced this. He spoke to IDEAL about the initiative, which began on August 13th and will conclude on September 6. These festivals offer special programming in 16 villages. They were created with the goal of bringing culture to these areas.

Montoro said that there are still activities to be done and that almost a week remains before the end. He thanked all those who attended the activities, and acknowledged the gratitude of all village residents. Some shows promote the local because all of the people or groups who participate are local.

Gallery. Gallery. Angel Montoro at the bottom of the image and Raul Ibanez both from Ciudadanos enjoying the performances. / IDEAL

Angel Montoro stated that nearly 100 people wanted to attend La Pedriza's night of monologues, and 70 attended the magic show at the Penas de Majalcoron. There are some activities that can accommodate a certain number of people, depending on how much space is available in each village. They also have all the security precautions. The mayor said that prior reservations are always appreciated. He also reminded that we keep the names and phone numbers of all attendees, in case of emergency, and take their surnames. You can make reservations in person at Alcala la Real's Edificio Joven or by calling 9535871 25.

He said that the villages were orphans from this kind of activity, and that the CALDEA festival was a first step. They see the future of this initiative and hope that this first edition will serve as a point of contact to help solve any errors and to create programming specific to each village.

Gallery. Safety and health measures include attendance control, as well as disinfection. / IDEAL

To comply with safety and health regulations, performances were distributed in villages according to an approximation or calculation of how many people could attend and the available spaces to carry out the same. Manolo Sarria performed in Ermita Nueva, which can hold between 250-300 people.

Montoro noted that the shows we believed would attract more people were placed in larger villages, just as with summer cinema. He said that he had also planned another series of shows but the limitations this year meant that we had to abandon them. However, this is just a first test.

The town hall was not only appreciated by the village residents, but the groups as well. Melody Lorca and the Electric Quarter groups were the only ones who hadn't been on stage in six months. This is also important for local artists who had a tough summer performing.

It is possible to say that some festivals are the greatest surprise of this unusual summer.

‹ ›
Keywords:
ApuestaCulturaAldeas
Your comment has been forwarded to the administrator for approval.×
Warning! Will constitute a criminal offense, illegal, threatening, offensive, insulting and swearing, derogatory, defamatory, vulgar, pornographic, indecent, personality rights, damaging or similar nature in the nature of all kinds of financial content, legal, criminal and administrative responsibility for the content of the sender member / members are belong.
Related News