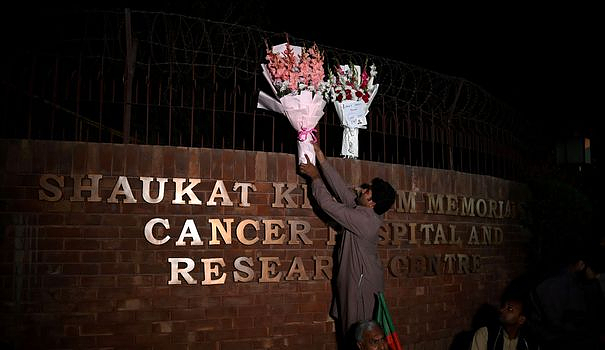 Mr. Khan, who was overthrown in April by a motion of no confidence, has been leading a "long march" since Friday, bringing together several thousand of his supporters between the city of Lahore (east) and the capital Islamabad, to obtain the holding of elections. anticipated.

It was an "attempt to kill him, to assassinate him," one of his close advisers, Raoof Hasan, told AFP.

The former cricket champion was injured in the right leg by shots fired at him and other officials of his party, Pakistan Tehreek-e-Insaf (PTI, Pakistan Justice Movement) , who were standing on top of a container placed on a truck moving slowly in the middle of the crowd, near Gujranwala (East).

"There was a guy in front of the container holding this automatic pistol. He fired a burst. Everyone who was standing in the front row was hit," Fawad Chaudhry, a former information minister in the country, told AFP. Khan government, behind which he stood.

People tried to seize the weapon, he said. "In the fight, he missed the target. There was a lot of blood on the container". A video shows Mr Khan and his team suddenly squatting as gunshots were heard.

According to Chaudhry, six people who were standing on the container were hit and a bystander was killed.

Information Minister Marriyum Aurangzeb announced that an assailant had been apprehended, and confirmed the authenticity of a video circulating online in which he explains his act.

"I did it because (Khan) was cheating the public. I tried to kill him, I did my best," the man with disheveled hair, his hands tied behind his back, explains to the inside what appears to be a police station.

He adds that he was angered by the music emanating from the procession at the time of the call to prayer.

Police did not immediately comment on the incident, or confirm reports that a second assailant was killed.

Faisal Sultan, the doctor who treated Mr Khan at Lahore hospital, and his former health adviser when he was prime minister, confirmed he was in stable condition.

Prime Minister Shehbaz Sharif said he "strongly condemns" the attack and "prays for the speedy recovery of Imran and the others injured".

Several political assassinations have marked the recent history of the country, which has also been struggling for decades with violent Islamist movements that challenge the influence of the central power.

This attack notably brings back the memory of the attack which cost the life in 2007 of Benazir Bhutto, the first woman of the modern era to have led a Muslim country. The sponsors of his assassination have never been identified.

Shots were fired and a suicide bomber blew himself up near her vehicle as she greeted her supporters in Rawalpindi. She had returned to Pakistan a few weeks earlier to take part in the elections, after several years in exile.

The very day of his return to the country, his convoy had been the target of another bloody attack in Karachi, in which more than 130 people had been killed.

Despite his ouster, Mr. Khan retains broad support among the population. Since April, he has held massive rallies across the country - drawing tens of thousands of supporters - to pressure the fragile ruling coalition.

Every day since the beginning of this march, Mr. Khan, 70, has climbed on this container to address thousands of his supporters from the cities crossed.

He continues to claim that his fall was the result of a "conspiracy" hatched by the United States, and relentlessly criticizes the government of his successor, as well as the military institution.

Imran Khan came to power in 2018, after the victory in the legislative elections of the PTI, on a populist platform combining promises of social reforms, religious conservatism and the fight against corruption.

But under his tenure, the economic situation had deteriorated and he had lost the support of the army, which was accused of having helped get him elected.

In recent months, he had repeatedly declared himself ready to die for his country, and his entourage had often reported threats against him.