Overfishing, pollution, traffic: the Bosphorus is losing its fish

"Come on, get out of there!", apostrophize the men, impatient to plunge their hooks back into the waters of the Bosphorus. 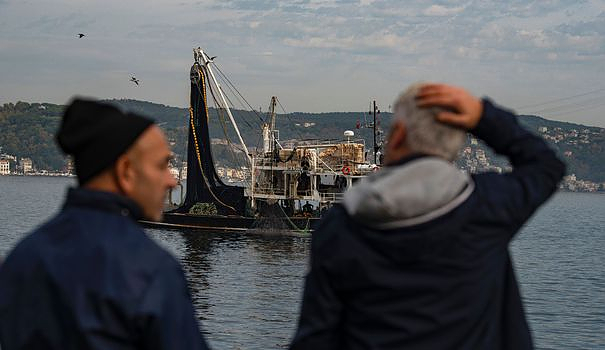 "Come on, get out of there!", apostrophize the men, impatient to plunge their hooks back into the waters of the Bosphorus.

"I've been here since 6 a.m. this morning, but this boat has cast its net in front of us and is completely blocking us," laments Mehmet Dogan, who was only able to hook one fish, a 40cm bonito.

It's high season for the "palamut" - bonito, a popular variety of tuna - in the Bosphorus that whole schools take by the thousands from the Black Sea to reach the Sea of ​​Marmara then the Mediterranean.

Stretched across the strait, the nets of the professionals, more than 1,000 m long, leave little chance to amateurs like Mehmet, posted continuously on the 30 km of banks. Even less to their prey.

"Here is the entry way for the fish. They won't even have time to lay their eggs", belches Murat Ayhanoglu, posted in the cove of Kireçburnu where the Görenler II, a 35 m trawler, dances whose crew can be heard panting as they pull up the heavy net.

"When they are there, there is no longer any question of catching the slightest fish", annoys the fifty-year-old who lists the species which are becoming scarce: horse mackerel, anchovies, picarel, bonito, bluefish. "The state must find a solution," he concludes.

According to Dr Saadet Karakulak, professor at the Faculty of Aquatic Sciences in Istanbul, the Bosphorus fishery has gone from some 500 to 600,000 tonnes per year to 328,000 tonnes in a few years, "proof that stocks are decreasing".

However, the authorities had a funny idea when they proposed at the beginning of the month to close the Bosphorus to traffic for half a day to give free rein to purse seiners and industrial trawlers.

The Ministry of Transport finally backed down in the face of protests from scientists and NGOs who denounced "a race to overfish in a biological corridor" of primary importance.

“On November 6, it was allowed to kill,” indignant Dr Bayram Öztürk, director of the Department of Marine Biology at Istanbul University and the Tudav Foundation for Marine Research.

"We can't do that these days. Stocks are in danger, we have sometimes reached the critical threshold, like for sole, sturgeon or swordfish. We have to think about sustainability."

For certain species, it is time to impose quotas, he judges.

This year, the anchovy is threatened because the bonitos, abundant, feast on it. And if the bonito is at the top, it is because it was able to recover thanks to the Covid, when the fishermen were confined, he explains.

But Dr Öztürk also cites plastics, urban pollution among the threats, as well as the intensity of maritime traffic.

The Bosphorus is one of the busiest straits in the world with more than 200 ships passing each day - container ships, Caspian tankers and bulk carriers, such as those bringing grain from Ukraine.

"And the strait is only 760m wide at its narrowest point," he remarks, calling for "regional-scale management: the fish don't have a passport, they spawn on the Ukrainian side, travel to Turkey and the Mediterranean" - and will be eaten on a Greek island as well.

- The mackerels of yesteryear -

Moored at the quay, the Serkan Karadeniz waits for the bay to free up so that it can go out and cast its nets. On board, Captain Serkan "followed the bonito" from the Black Sea.

It comes from Samsun in the Black Sea (north), the Görenler is based in Canakkale, in the Aegean Sea (west). All converge here.

"With more than 300 trawlers, the competition is fierce", says the captain who has "followed the bonito" this season, he who usually hunts mainly anchovies.

"October-November is the full migration to Marmara and the Aegean Sea", underlines Erdogan Kartal, 60 years old and in "fishing since childhood". President of a union of 34 cooperatives, he deals with 2,000 fishermen.

“The size of the fish has really decreased, they are getting smaller and smaller,” he says. "We catch fish that will not even have had time to spawn: it's dangerous."

"Where are the beautiful mackerels of yesteryear? We don't see any more."

For him it is necessary to set size limits and quotas: "We have to make some sacrifices", he says. "If we let them pass, the fish will come back."