Nazha Machrouh and Manuel Santiago are the brilliant Huescar winners 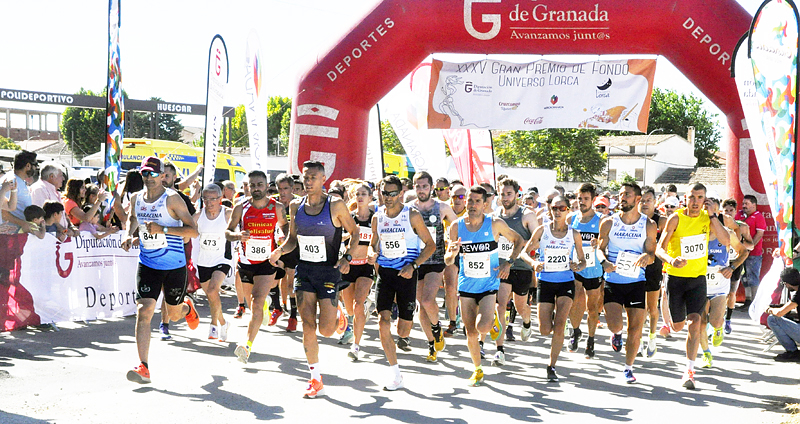 The XXIIIth race of Fondo del Cordero Segureno fulfilled all the predictions and gave winners to Manuel Santiago Molina, CD Bewor, and Nazha Machrouh, Club Atletismo Maracena. Both athletes won with authority in Huescar in the tenth race in Gran Premio Diputacion Fund Universo Lorca this season. There are five races left.

More than 300 athletes assembled at the starting line located near the Municipal Sports Center. 293 of them reached the finish line.

The runners who wanted to be in the top positions were there from the beginning. It was at the same time that Noelia Sanchez dengra, the Huesca City Council Councilor for Sports, gave the start signal. Javier Domene, a C.A. athlete, was sent to Manuel Santiago's aid to make it more difficult to win. Maracena arrived from Baza. He is in good condition but has been suffering from dehydration for the past two days. However, he was able survive the great champion Manuel Santiago until the end of the race. At kilometer 5, however, Maracena had to retire. Manuel Santiago left his rival at the finish line in 37 seconds. He arrived outstandingly to add a new win in the XXXV Edition of the "Universo Lorca Fund Grand Prix". The winner was 32:32. Javier Domene was second with 33:09. And the Bastetano (C.A.) took third. Maracena) was 33:56.

It was surprising to the Huesca public that it was the great race. The female winner, Nazha Makrouh, arrived just a few minutes after the first male classification. The time was 35:17 for the athlete from C.A Maracena. Carolina Huertas came in second with a time 37:46. This time, Zhor El amrani Baba Ali (C.A Maracena), was third with a 38:08 time.

Jesus Martinez Fuentes (Huescar Athletics Club) and Sonia Bautista were the local winners. Maracena Athletics Club was the club with the highest number of athletes participating in the race, earning it a PGI Segureno Lamb. Manuel Santiago and Nazha Makrouh will each receive the same award at home.

The race went without incident. The circuit has two kilometers of continuous ascent, then the section of Canal de San Clemente. This section is very heavy and long, and the panorama changes dramatically when you reach the Carretera de Las Santas.

‹ ›
Keywords:
ManuelSantiagoNazhaMachrouhBrillantesGanadoresHuescar
Your comment has been forwarded to the administrator for approval.×
Warning! Will constitute a criminal offense, illegal, threatening, offensive, insulting and swearing, derogatory, defamatory, vulgar, pornographic, indecent, personality rights, damaging or similar nature in the nature of all kinds of financial content, legal, criminal and administrative responsibility for the content of the sender member / members are belong.
Related News