"My friend, I think globally" - will the brazen celebrity chef be punished now?

Whether there will be any consequences remains to be seen. 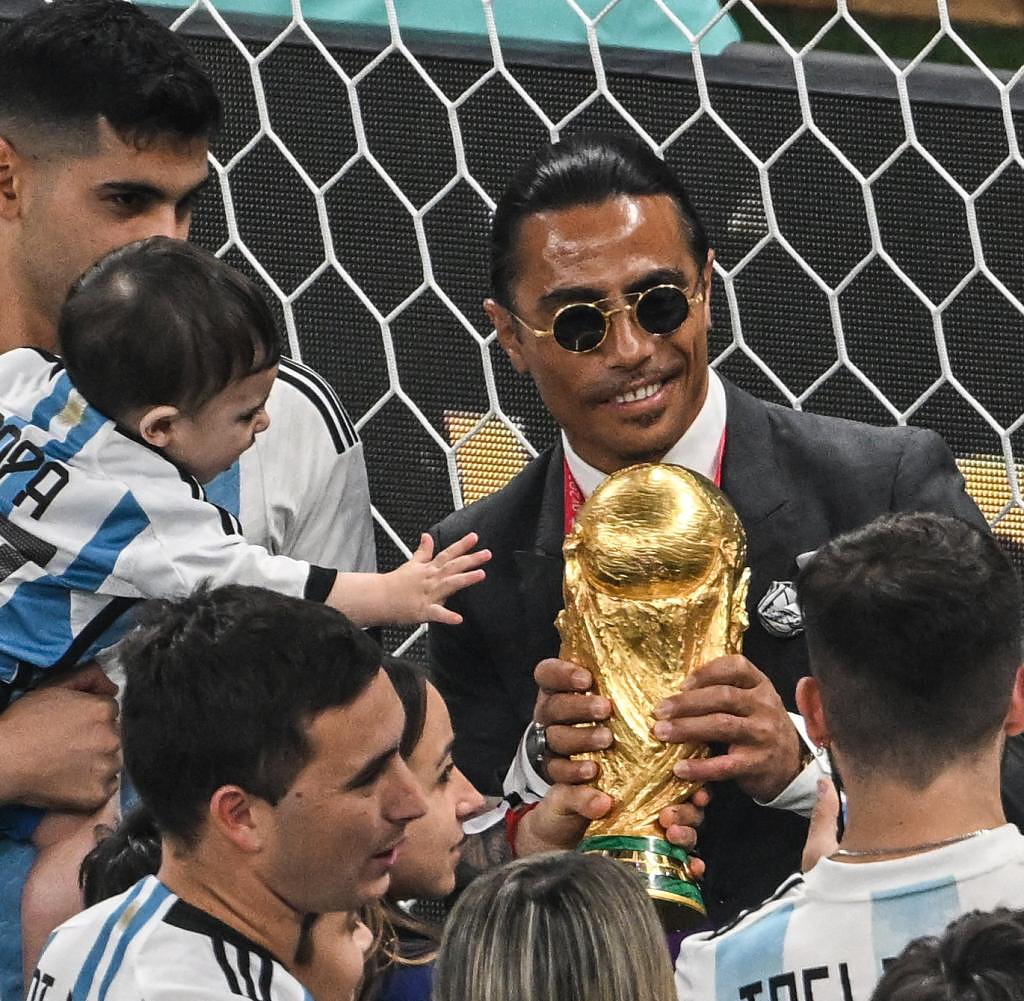 Whether there will be any consequences remains to be seen. But at least the world football association Fifa wants to investigate the incidents at the closing ceremony of the World Cup in Qatar after the Argentine team won the title. Fifa is said to have determined that people in the Lusail Stadium in Doha had gained unauthorized access to the field, the world association said and announced that appropriate internal measures would be taken.

Gökce's "appearance" caused a lot of debate – and brought him a shitstorm. Apparently he had an accreditation from Fifa that allowed him to enter the field after the final. By touching the cup, he proudly posted pictures on social networks, he not only violated good manners, but also the regulations of the world association. There it is stipulated that only current and former world champions, heads of state and selected Fifa employees are allowed to touch the original cup - the brazen Gökce even kissed the cup.

A video, for example, shows him running after Messi to congratulate him. However, at first he was clearly rebuffed, only later did Gökce get his somewhat forced selfie with the Argentinian captain, which he immediately posted on Instagram for PR purposes.

Gökce runs one of his luxury restaurants in Doha. He is best known for his videos in which he salts the meat served with a strange gesture - hence his nickname. During the tournament he attended other games and appeared several times with Fifa boss Gianni Infantino. In addition to his aloof appearance, the horrendous prices and the flaunting and wasting of food in his videos are now being criticized.

At the beginning of 2019, a visit by former Bayern professional Franck Ribery to Nusret's restaurant in Dubai caused a stir. At the time, Ribery was attacked on social networks for eating a gold-plated steak. As a result, he launched a rant online – and thus received a fine from FC Bayern.

In the first days of the World Cup in Qatar, a reporter from the Munich newspaper "tz" was a guest in Nusret Gökce's restaurant. He posed for a photo with the reporter, but when the reporter asked for a brief interview, he declined. "No, my friend. Thinking globally: New York Times, CNN. If you ever work there, we can do an interview," the newspaper quoted Gökce as saying.

‹ ›
Keywords:
Fußball WM 2022MessiLionelInfantinoGianniFifaTexttospeechKatarDohaSalt BaeNusret GökçeGianni InfantinoArgentinienAbschlusszeremonieFussball
Your comment has been forwarded to the administrator for approval.×
Warning! Will constitute a criminal offense, illegal, threatening, offensive, insulting and swearing, derogatory, defamatory, vulgar, pornographic, indecent, personality rights, damaging or similar nature in the nature of all kinds of financial content, legal, criminal and administrative responsibility for the content of the sender member / members are belong.
Related News