The Portuguese Miguel Oliveira (KTM) proved to be the most impervious to wet conditions, to win his second event of the season, after Indonesia in March. 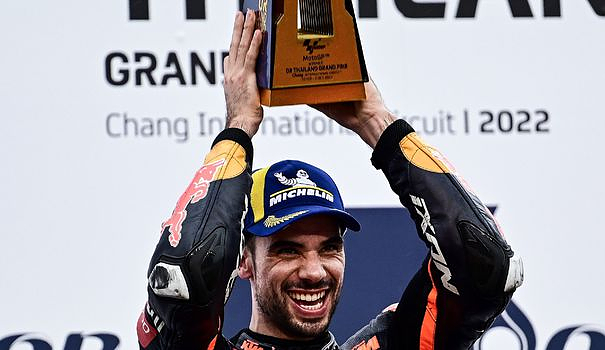 The Portuguese Miguel Oliveira (KTM) proved to be the most impervious to wet conditions, to win his second event of the season, after Indonesia in March... already on a wet track.

"I can't complain, I'm always fast in the wet," smiled the rider who will join Aprilia-RNF in 2023.

He edged out Ducati factory team duo Jack Miller and Bagnaia at Buriram, who snatched valuable points in the title chase.

Relegated to 18 points after Japan last weekend, where he retired due to a fall, "Pecco" is only two units behind "Quarta" who, more than ever, trembles on his throne .

"The title race is going to be more intense. You will have to be very smart. Our potential is very high, but I must not make mistakes like in Japan," Bagnaia assured.

"When I saw the rain before the race, I was nervous. But Jack (Miller) told me to believe in myself," he explained.

- Quartararo silent after the race -

Heavy downpours delayed the start of the race by 55 minutes, but calmed down by the time the drivers battled it out - before picking up again after the podium ceremony.

"Quarta", who does not like wet tracks, watched it from afar: starting fourth, he was 17th at the end of the first lap, catastrophic.

The Niçois never managed to regain rhythm, stuck in the peloton. He finished outside the top 15, synonymous with points, for the first time since the Aragon Grand Prix in 2020 - excluding retirements.

He dried up his point with the press after the race, as well as with the broadcaster, a rare occurrence which betrays his disappointment.

In addition to Bagnaia, now Aleix Espargaro (Aprilia) also feels the wind at his back. Eleventh at Buriram, he is 20 points behind Quartararo, in an outsider position.

The Frenchman Johann Zarco (Ducati-Pramac) settled for 4th place, while his pace at the end of the race gave him a glimpse of a better result.

"If the track had dried three laps before, I would have overtaken Pecco (Bagnaia) and I would have had the speed to get Jack and Miguel", conceded the Cannes native who obtained his best result since the German GP in June .

The rain reminded his studies of Italian rookie Marco Bezzecchi (Ducati-VR46), poleman on Saturday but only 16th the next day.

Marc Marquez, he spoke about his experience as a six-time world champion, with a 5th place which confirms his return to form, after a summer in the infirmary due to a new operation on one arm.

In Moto2, where the race lasted only eight laps due to bad weather, the Italian Tony Arbolino, first at the time of the red flag synonymous with a return to the pits, won the timpani.

The gap narrowed to 1.5 points in the world championship between Augusto Fernandez and Ai Ogura.

Before the showers, in Moto3, the Italian Dennis Foggia (Leopard) won his 4th race of the season, ahead of the Japanese Ayumu Sasaki (Husqvarna). The Spaniard Izan Guevera (Gasgas), fifth, takes the lead in the world championship.

Severely tested with three races over the past three weeks, the paddock is blowing up next weekend, but at a distance from its base camp.

Australia looms on October 16, then Malaysia (October 23). The 2022 season ends on November 6 in Valencia.