Three races from the end of the season, the challenge for Quartararo, reigning world champion, will be to retain the reins of the championship on Sunday since only two points separate him from the Italian, winner of four of the last seven Grands Prix. 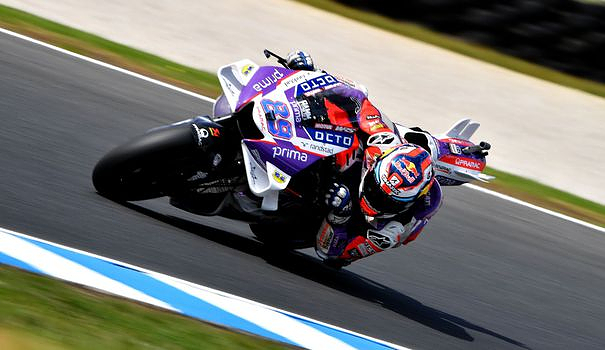 Three races from the end of the season, the challenge for Quartararo, reigning world champion, will be to retain the reins of the championship on Sunday since only two points separate him from the Italian, winner of four of the last seven Grands Prix.

"I'm happy to be in front!" Reacted Bagnaia (Ducati) after qualifying, explaining that he "pushed from the start" to try to keep his main opponent at a good distance at the end of the season.

"Every time we do a good turn, it's never enough", lamented the Frenchman, "frustrated". Quartararo, who hasn't started on the front row since the Dutch GP in June, suffers from a less efficient Yamaha than the Ducati -or even the Aprilia-, and a serious speed deficit in the straight line.

Another title contender, Aleix Espargaro, third in the championship on 20 points, managed to insert his Aprilia between the two leading men in the general standings - he will start 4th.

"I have nothing to lose (...). They are 20 points ahead (...), I will attack 100%, I have to take risks and I feel that I can do it", said assured the Spaniard, while the race should depend on the choice of tires before the start and their management during the race, with sunny but cool weather.

On the front row, Bagnaia will start behind the six-time MotoGP world champion, the Spaniard Marc Marquez (Honda), 2nd, and a phenomenal Jorge Martin who signs his third pole of the season.

On the maritime route at the crossroads of the Pacific and Indian oceans, in southern Australia, the Ducati-Pramac rider broke the nine-year-old Phillip Island circuit lap record on Saturday. Before the arrival of the paddock in Australia, it was owned by another Jorge -Lorenzo-, triple world champion (2010, 2012 and 2015).

"I thought I could be competitive, but not to this extent," said the poleman in the Australian cool, but under the sun.

Australia signs its return to the MotoGP calendar after three years of absence due to the Covid-19 pandemic. In 2019, Marc Marquez won there starting third on the grid.

This year, the Honda driver, victim since 2020 of health problems which have regularly kept him away from the circuits, is only in 13th place overall after missing almost half of the races.

In the championship, in addition to Quartararo, Bagnaia and Espargaro, four other drivers can still claim the world crown, including the Italian Enea Bastianini (Ducati-Gresini), at 39 units and who will start from a modest 15th place on Sunday, and local event Jack Miller, in great shape at the end of the season, at 40 points.

If he wants to make his fans dream by winning "his" GP, the Ducati rider will only start from 8th place on the grid.

Earlier in the day, the Australian inaugurated a bend in his name, the "Miller corner", on the track. Before him, other national riders such as the double MotoGP world champion Casey Stoner - present this weekend in the paddock - were also entitled to this honor.

In the championship, Miller precedes the South African Brad Binder (KTM-154 points) and Johann Zarco, 68 points behind his compatriot, both still mathematically in the race while 75 points remain to be distributed.