More than ten million Ukrainians without electricity after Russian strikes

Several cities including kyiv find themselves plunged into darkness. 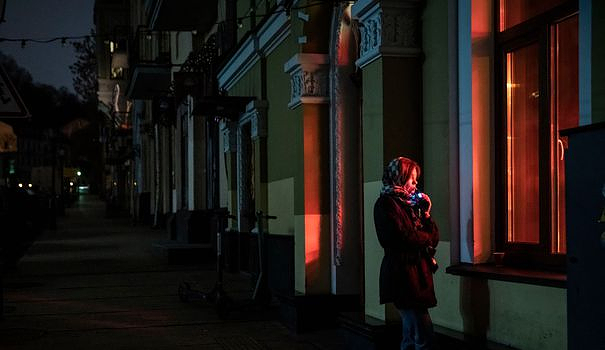 Several cities including kyiv find themselves plunged into darkness. More than 10 million Ukrainians are without electricity, President Volodymyr Zelensky announced on Thursday evening, particularly in the kyiv region, the Ukrainian president said during his daily televised address.

Several Ukrainian cities, including the capital kyiv, were the targets of Russian strikes on Thursday, which coincide with the first snowfall in a country plagued by power cuts where temperatures could drop to -10°C. The repetition of these bombardments targeting Ukraine's energy infrastructure since October regularly deprives part of the population of power but also of water.

More than ten million Ukrainians were without electricity on Friday, the day after new Russian strikes in several cities, including kyiv, which occurred during the first snowfalls. These repetitive bombardments have targeted Ukraine's energy infrastructure since October, regularly depriving electricity but also water for millions of inhabitants.

"At present, more than ten million Ukrainians are without electricity", particularly in the kyiv region, Ukrainian President Volodymyr Zelensky said Thursday evening during his daily televised address. The Ukrainian president, whose country will enter its tenth month of war on November 24, denounced "another Russian terrorist attack". The Kremlin countered on Thursday that the suffering of civilians in Ukraine was attributable to kyiv's refusal to negotiate.

French President Emmanuel Macron on Friday called on Asia-Pacific countries to join the "growing consensus" against the war in Ukraine, stressing that this war was also "their problem". "France's number one priority is to contribute to peace in Ukraine and to try to have a global dynamic to put pressure on Russia," he said at the APEC economic leaders summit. .

"France is not just focusing on supporting Ukraine and we will continue to support it," he said in a speech in English. She also wants to "work very closely with different countries like China, India, the whole region, the Middle East, Africa, Latin America, to create a growing consensus and say 'this war is also your problem because it will create a lot of destabilization'".

Anti-aircraft defense plays a vital, and highly effective, role in Ukraine's response to the Russian invasion, but it is being stretched by the intensification of strikes from Moscow. In difficulty on the ground, Russia has been increasing its bombardments on Ukrainian energy infrastructure since October, a rain of strikes particularly heavy this week.

If the Ukrainian defense has so far prevented Moscow from taking control of the airspace, kyiv's allies are aware that it will have to be reinforced so that it can withstand this deluge of fire. While they offer to send both modern and old weapons, stressing that they will not be immediately available, Ukraine judges that it is time to deliver sophisticated Patriot-style batteries.

American basketball champion Brittney Griner has been transferred to a penal colony in central Russia to serve a heavy prison sentence, despite protests from Washington which denounces a political condemnation.

The 32-year-old star, recognized as one of the best players in the world, was sentenced in August to nine years in prison for "drug trafficking", a case with a strong geopolitical dimension which involves negotiations around an exchange of prisoners between Moscow and Washington and tensions related to the conflict in Ukraine.

After the rejection of her appeal last month, Brittney Griner had left her remand center in early November to be sent to a penal colony, where the conditions are harsher, but the exact location had not been disclosed.

The IAEA Board of Governors on Thursday adopted a new resolution calling on Russia to withdraw from Ukraine's Zaporizhia power plant and halt its actions against nuclear sites, diplomatic sources said. The text, presented by Canada and Finland, was approved by 24 of the 35 States sitting on the Council, said two diplomats contacted by AFP. Russia and China voted against.

Seven countries abstained (Pakistan, India, South Africa, Namibia, Kenya, Vietnam, Saudi Arabia). Two were absent. Two resolutions on the subject had already been adopted, in March and then in September, when the incessant bombardments in Ukraine raised fears of the risk of a nuclear accident. In this text, the Board of Governors of the International Atomic Energy Agency (IAEA) "expresses its deep concern" at Russia's refusal to stop its attacks against Ukrainian nuclear installations.

The scale of torture in Kherson during the Russian occupation of the southern Ukrainian city is "horrific", a senior Ukrainian human rights official said on Thursday. “I have not yet seen” torture “on such a scale”, “after having visited all the torture rooms in various regions of Ukraine”, indicated Dmytro Loubynets, in charge of the Parliament for human rights. , on national television. "The scale of the phenomenon is horrifying."

"Dozens of people" were "electrocuted, beaten with metal pipes. Their bones were broken" and "the Russians filmed it all", he accused. “I am sure that in every major locality we will discover a torture chamber. Because it is a system put in place by Russia”. Ukrainian authorities have announced that they have discovered several torture chambers in areas of the Kherson region recently retaken from the Russians after months of occupation.

Ukrainian experts have arrived in Poland to take part in the investigation aimed at determining from where the missile that killed two people in Poland was fired, the head of Ukrainian diplomacy said on Thursday. "Our experts are already in Poland," Dmytro Kouleba tweeted. "We hope that they will quickly gain access to the site" of the incident, "in cooperation with Polish law enforcement," he added.