The fan gave everything to get an autograph. 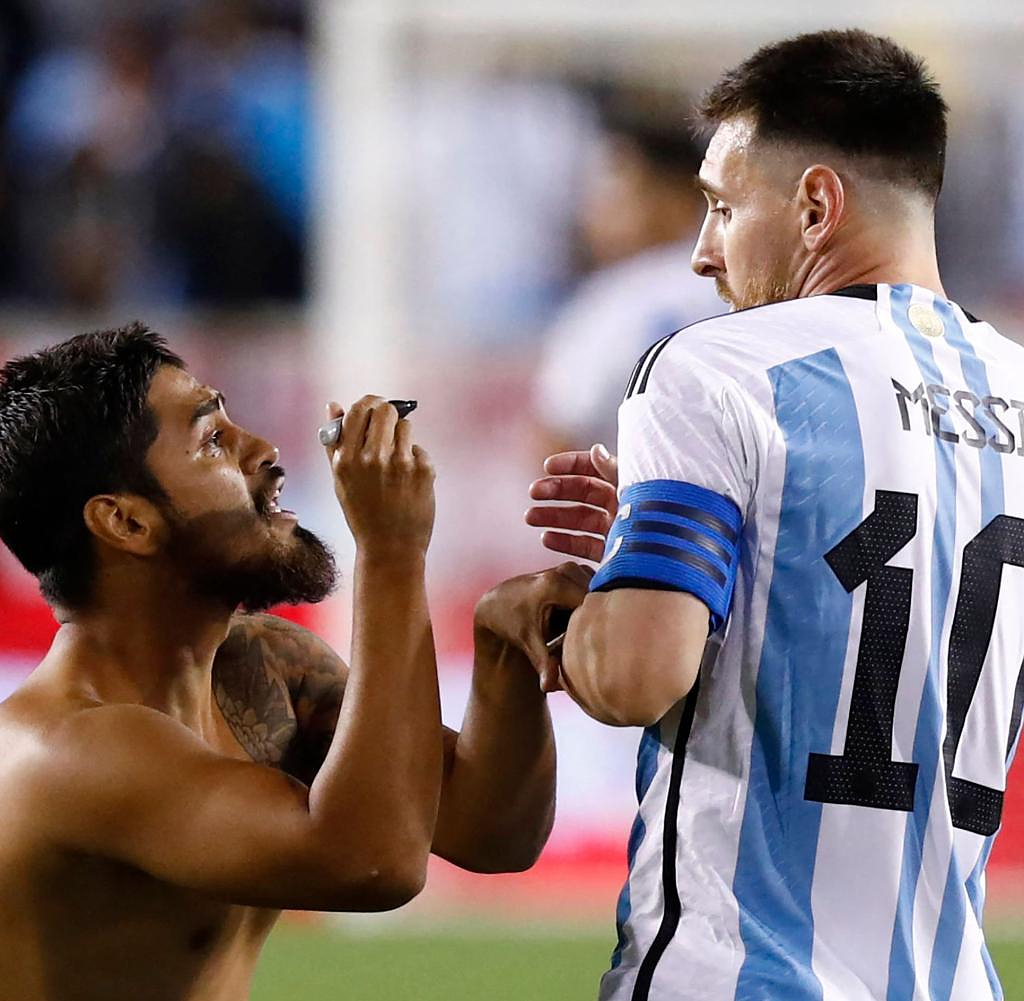 The fan gave everything to get an autograph. After the 2-0, he stormed the lawn shirtless, gave his idol a pen and stood on his back in front of him. Lionel Messi was already preparing to immortalize his signature on the streaker's bare skin. But then stewards came storming onto the pitch to tackle the fan like in football and roughly lead him off the field.

Messi will have coped with not being able to sign the autograph. Once again the 34-year-old delivered a very strong performance. Coach Lionel Scaloni initially rested him in the Argentina national team's friendly against Jamaica. But after coming on as a substitute in the second half, the superstar decided the game single-handedly. He scored with a powerful shot from 20 meters to make it 2-0 and scored the goal to make it 3-0 with a directly converted free kick.

With his two goals, Messi underlined his outstanding form two months before the World Cup in Qatar (20 November to 18 December). With the win against Jamaica he broke another sound barrier. The Paris St. Germain striker celebrated his 100th victory in Argentina national team jersey. No player in Argentina's history has been as successful. With 164 games in which Messi has scored 90 goals (51 assists), he is by far his country's record capper. He is followed by Javier Mascherano (147) and Javier Zanetti (145).

Messi will play the upcoming games at the World Cup. Argentina will face Poland, Mexico and Saudi Arabia in the preliminary round. The team is considered one of the favorites for the title. Because while other top nations like England, Spain or Germany are weakening, Argentina is already in World Cup form. The team is unbeaten in 35 games, their last defeat being a 2-0 loss to hosts Brazil in the 2019 Copa America semi-finals.

Two years later, Messi's team retaliated with a 1-0 win in the final. This was Brazil's last defeat. Since then, the Selecao have won twelve out of 15 games in three draws. The two great soccer nations from South America undoubtedly travel to Qatar with great self-confidence.

"Brazil is my top favourite," said former German international Toni Kroos in his podcast "Einfach mal Luppen". Kroos has a number of Brazil internationals as teammates at Real Madrid. "There are three or four of our guys that I see every day and I think they're very good. In addition, Brazil is winning everything at the moment when you look at the latest results.”

‹ ›
Keywords:
MessiLionelArgentinien FußballnationalmannschaftFußball WM 2022Lionel MessiArgentinienBrasilienReal MadridJamaikaFussballSelecaoToni Kroos
Your comment has been forwarded to the administrator for approval.×
Warning! Will constitute a criminal offense, illegal, threatening, offensive, insulting and swearing, derogatory, defamatory, vulgar, pornographic, indecent, personality rights, damaging or similar nature in the nature of all kinds of financial content, legal, criminal and administrative responsibility for the content of the sender member / members are belong.
Related News