Mastodon, the social network that welcomes the disappointed of Twitter after the takeover of Musk

If Elon Musk, the richest man in the world, justifies his takeover of Twitter by a desire to "strengthen freedom of expression" and to "help humanity", many users of the social network see a bad eye this acquisition and fear drifts. 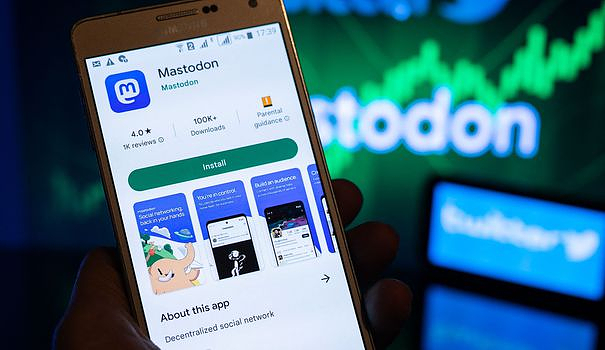 If Elon Musk, the richest man in the world, justifies his takeover of Twitter by a desire to "strengthen freedom of expression" and to "help humanity", many users of the social network see a bad eye this acquisition and fear drifts. Indeed, many have announced their wish to leave the application since Friday, the official day of the takeover of Twitter by Elon Musk. Departure promises illustrated by hashtags (keywords) that went viral on Tuesday, such as

But another platform, similar to Twitter, seems to have recovered since Friday a few tens of thousands of disappointed social network bluebird. His name: Mastodon. Founded in 2016 by Eugen Rochko, a German programmer dissatisfied with Twitter, the social network nevertheless resembles him in many points. Nevertheless, Mastodon is decentralized. In other words, it cannot be controlled by a single corporation or a multi-billion dollar businessman. This implies that platform users must choose a server (also called "instance") on which to register as soon as they create their profile. "Each server is managed by an independent organization or individual and may differ in moderation policy," Mastodon explains on its site. And to clarify: "With an account on a server, you can follow any other person on the network, regardless of where their account is hosted. You will see their messages in your main thread, and if they follow you, they will see yours at home." A server allows you to follow messages related to a theme, such as food, politics, video games... In total, Mastodon lists nearly 3,300 servers.

"The funny thing is that one of the reasons I started getting into decentralized social networks in 2016, and eventually led me to create Mastodon, was the rumor that Twitter, the platform I used daily for years, could be sold to another controversial billionaire,” wrote Eugen Rochko, the creator of Mastodon, in a press release published last April. Unlike Twitter, Mastodon works without advertising or invitations to discover certain profiles.

Paradoxically, it is, among other things, in a tweet that Mastodon puts forward its philosophy, displaying a strong desire to stand out from Twitter: "We present a vision of social media that cannot be bought and owned by any billionaire. Your ability to communicate online should not depend on a single commercial company!"

Since Friday, the social network has gained nearly 70,000 users, and has 670,000 subscribers in total, according to the British daily The Guardian. A clear advance, which ultimately represents only a drop of water compared to the 436 million users of Twitter.

In fact, the social network works like Twitter, that is to say it is a "microblogging" platform. It is possible to publish messages of up to 500 characters (against 280 on Twitter) with photos, polls, videos, or to subscribe to other users and see their messages in chronological order. In the language of Mastodon, the equivalent of a "tweet" is a "toot", that is to say a blast of the horn. And a "retweet" is a "boost".

Could the dissatisfied Twitterers all end up heading to Mastodon? The answer is not evident. "If your problem with Twitter is seeing annoying ads for fast food, then yes. But if it's hostility, anger, [...] that comes out of a lot of the content that Twitter 'we find there, so maybe not,' sums up Drake Bennett, journalist for the Bloomberg press agency. In question, the issue of servers, which can be generated by anyone and pose some moderation problems. If Mastodon ensures that its servers are constantly committed to moderating against racism, sexism and transphobia, the social network also claims that users have "total control of [his] own voice on the web, without being subject to the rules or anyone's whim".

According to the specialized magazine Wired, Mastodon would not, however, be the only social network to prepare to welcome the disappointed Twitter. This is the case of the Discord platform. As for the co-founder of Twitter, Jack Dorsey, who left the house at the blue bird in 2021, he announced the upcoming launch of his own social network called BlueSky.