MAP. Where are the gas stocks of European countries in view of the winter?

The objective is (already) almost fulfilled. 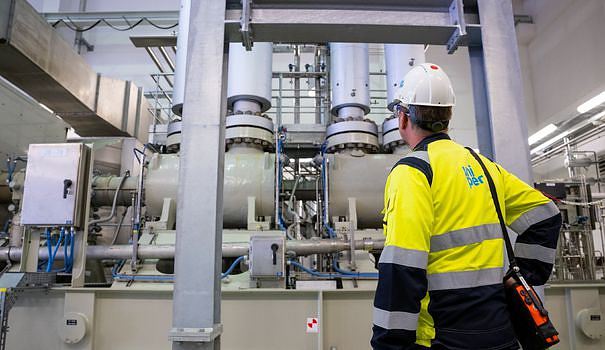 The objective is (already) almost fulfilled. France had filled this Thursday, August 25 in the morning to 90% of its gas stocks for the winter, according to the European platform Aggregated Gas Storage Inventory (AGSI). Paris is therefore on the right track to meet its objectives in order to face potential energy shortages this winter linked to the war in Ukraine.

The government's objective is to fill the country's storage capacity with natural gas to 100% by November 2022 as the tap of Russian exports to Western countries that support Ukraine gradually dries up, and the gas prices in Europe are breaking records. The price was moving at more than 300 euros per megawatt hour on Wednesday morning, at historic levels, more seen since the start of the Russian invasion. The Russian giant Gazprom has since the start of the war in Ukraine stopped gas deliveries to several European countries and drastically reduced its deliveries to Europe last June via the Nord Stream gas pipeline.

In France, in detail, the stocks of Teréga, one of the two operators of the country's gas transmission network, were at 91.21% of their capacity, when those of Storengy, a subsidiary of Engie, were at 89.67%, according to the AGSI website. 100% stocks would be equivalent to more than 25% of the annual gas consumption in France.

France, for which natural gas represented 15.8% of total energy consumption in 2020, considers itself to be in a more "favorable" situation than its neighbors. It is counting on gas stocks filled to the maximum and on a new LNG terminal from 2023 to receive imports of liquefied gas from countries other than Russia.

The Minister for Energy Transition, Agnès Pannier-Runacher, had indicated during the summer that the government's objective was to fill the stocks to 100% "before November 1", while operators are usually obliged to fulfill these reserves to 85% by that date.

The country now seems well ahead of this strategic objective. Especially since "it is on the question of Russian gas that part of the growth in Europe will be played in the coming months" and the risk of recession, for his part affirmed Wednesday on France 5 the Minister of l Economy Bruno Le Maire. "Everything will depend on Vladimir Putin's decisions on gas," he said. “If he ever decides to cut the gas for the EU and the euro zone, we estimate the impact on growth, for France alone, at half a point of GDP, and probably more for other economies more dependent on Russian gas than we are".

With the sword of Damocles of shortage for the months to come, the President of the Republic Emmanuel Macron called on Wednesday during the Council of Ministers for the return to school for "unity" in the face of the end of "abundance". With the watchword "energy sobriety", also justified by the energy transition in progress to deal with climate change.

Even if the gas reserves are 100% full, it will also be necessary to reduce its consumption in order to be able to survive the winter, both of gas and of electricity. The ban on the open doors of heated or air-conditioned stores, and that of illuminated advertisements at night (with the exception of stations and airports) is expected before "the end of summer", according to the Ministry of Ecological Transition. A bill to develop renewable energies is also in preparation.

The Brussels plan - which has yet to be validated by the Member States - provides for each of the 27 countries of the European Union to reduce, between August 2022 and March 2023, its gas consumption by at least 15% compared to the average. of the last five years over the same period. On Wednesday, Germany enacted a series of measures: heating capped in administrations and public buildings, at night prohibition of the lighting of buildings and illuminated advertisements off or even heating of private swimming pools prohibited if connected to the public network.