Kristof, ex-NYT columnist, announces he will run for Oregon governor

Nicholas Kristof, a former New York Times journalist, announced Wednesday that he would run for Oregon governor. He said the state needed a political newbie in order to address problems such as rural despair and homelessness. 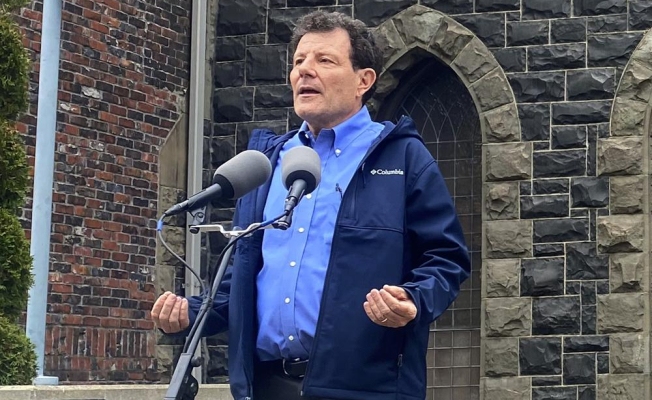 Kristof stated in a campaign video that he had never run for office. He viewed it as an asset. After covering crises all over the globe, Kristof felt that he was compelled by his state to run for governor.

Kristof noted that many of his Yamhill childhood friends, who are 25 miles (40 km) southwest of Portland, have died from drug or alcohol-related causes. Kristof refers to them as victims of inequality.

Kristof is joining a large field of Democrats who are seeking to nominate their party for the 2020 election. Since 1987, the governor's post has been held by Democrats.

Kristof stated in his video that political leaders are unable to address issues like drug addiction, homelessness and unaffordable housing. He also mentions the spiraling Portland homicide rate and poor mental health support.

Kristof was wearing a Columbia Sportswear jacket that featured the logo. Kristof said, "Nothing will change unless we stop moving politicians up and down the career ladder year in, year out."

Kristof was asked if he is eligible to run as a governor. The law requires that a candidate have lived in the state for at most three years prior to running for governor. Kristof voted for New York in November 2020.

"I should have changed my registration. I was not focused on paperwork. Kristof said Wednesday that he was focused on voting for Joe Biden and to remove President Trump.

Kristof's legal opinion was first reported in Willamette Week. It stated that Kristof considered Oregon his home even though his job required him live all over the globe.

"Nothing in Oregon's Constitution, nor the historical sources used for its interpretation, suggests that registration to vote only in one jurisdiction disqualifies someone from residential eligibility to governor," stated the opinion, which was co-written and signed by Misha Isaak (Oregon Gov.). Kate Brown's former general counsel.

Kristof and Sheryl WuDunn, his wife and a New York Times reporter, bought a Yamhill property of 150 acres in 1993. They have since worked the land and paid Oregon property tax.

The lawyers also added that Kristof had hiked the entire length of the Pacific Crest Trail, trekked around Mount Hood (the state's highest peak), and eaten at Mo's Seafood and Chowder, a Lincoln City restaurant that's a landmark on the Oregon Coast.

Richard Clucas is a Portland State University political science professor who said Kristof will not be able coast to victory on name recognition. Many Oregonians are unaware of Kristof's two Pulitzer Prizes for foreign correspondent and columnist.

He is not an actor or professional wrestler or reality TV star. Clucas stated that he is a columnist for a magazine with a particular type of readership.

He asked his class of 30 students about state politics to tell him if they had ever heard of Kristof. Only two students did.

Kristof's announcement was covered by the media, which will help him get name recognition. However, he faces a difficult task ahead of the May 17 primary elections where the Democratic and GOP governoral candidates will be elected.

Clucas stated that Kristof's roots in rural Oregon may resonate with voters.

"Clearly, the issues that he raised are ones people are concerned about in Oregon. Clucas stated that some parts of rural Oregon are still in recession after the 1980s.

Kristof, who quit The New York Times earlier in the month, has often written about the economic and sociological problems of people he grew-up with in Oregon, as the region's timber and manufacturing economies collapsed.

Kristof stated, "I believe we need to try and build some bridges to try to connect this state together." "I would hope, perhaps, that, perhaps, as a liberal coming from a rural region, I might have some advantage in trying that."

Democratic governor. Kate Brown has been appointed to a term-limited position and cannot run again for the top office in the state. A dozen Republican candidates also indicated that they would run for the nomination.