K'gari - paradise off the coast of Queensland

"K'gari", paradise, is the indigenous name of Fraser Island, the island on the south coast of Queensland. 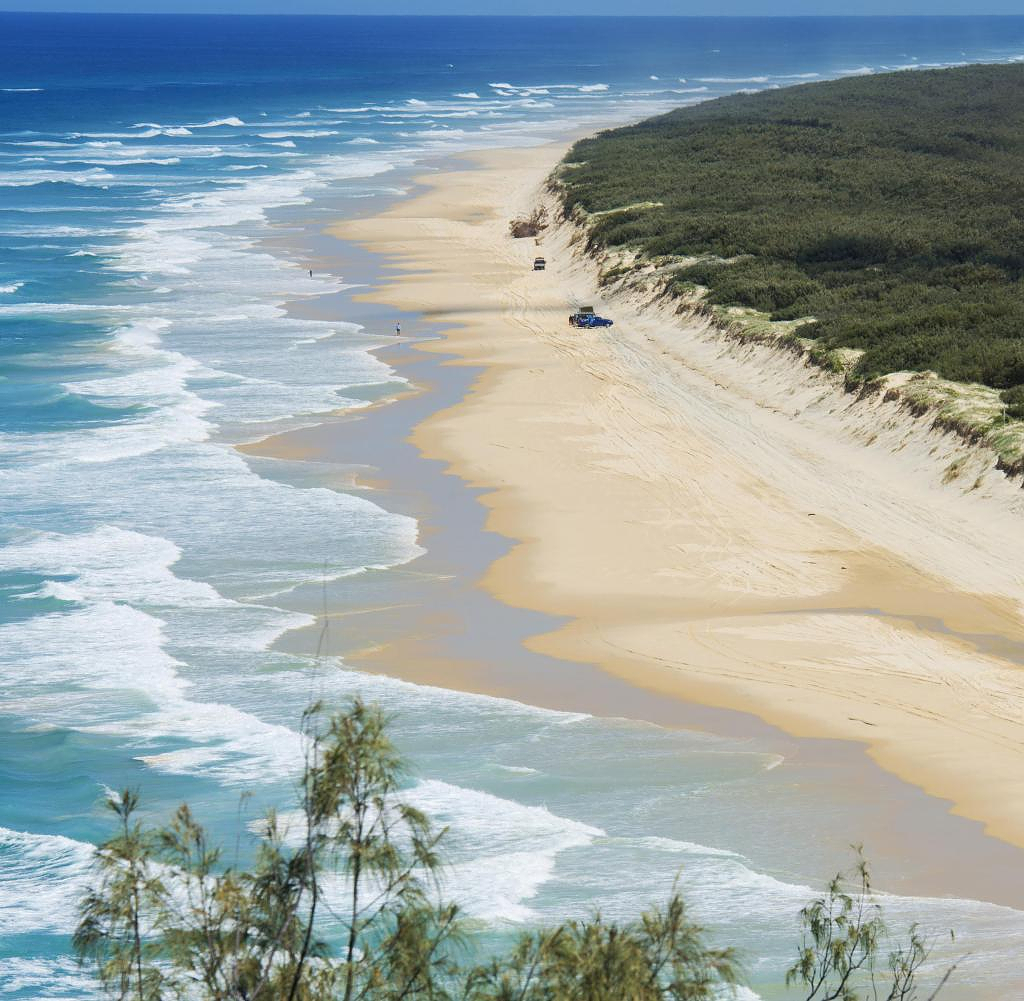 "K'gari", paradise, is the indigenous name of Fraser Island, the island on the south coast of Queensland. 30 years ago in December, the paradisiacal island in Australia became a UNESCO World Heritage Site. For the anniversary, the largest sand island in the world has officially got its indigenous name back - as a sign of reconciliation with the indigenous people.

This is what it must have looked like a long, long time ago, when there were dinosaurs and no humans. Royal ferns grow rampant over the clear water, fantastic-looking dragon trees and massive turpentine trees compete for space in the sun, the few harmless clouds are reflected in the lake, and the bare trees on the lonely shifting dunes look like a picture by Salvador Dalí.

K'gari would be the perfect setting for the dream of prehistoric times - if it weren't for the cars that hurtle down the beach as if they were racing in a Formula 1 race. And then the jeeps. They are everywhere in this national park. No sandy path is too bumpy for them, no gully too deep, no slope too steep for them not to drive into the wilderness with their car – even at the risk of getting stuck in the sand.

"Fraser is such a place where anything can happen," says Peter Meyer. The photographer and ranger with German roots has lived on the island in Queensland since 1995 and knows every corner. "We're quite superstitious," he adds, "we think nature is teaching us a lesson."

But the tourists love mishaps, assures the blond giant. Like back then, when a bus on the beach had to crash through a high wave and the water was literally up to the passengers' necks. Only the stowaways, three fish, felt comfortable there. Peter laughs as he remembers it. Sometimes nature strikes back.

The slim ranger with the narrow face under the leather hat and the delicate hands looks like a German version of Crocodile Dundee. He can't imagine a better life. He loves nature, plants and animals, and he only goes stalking with his camera. His large-format photographs hang in the "Kingfisher Bay Resort" and the "K'gari Beach Resort", and they make you want to explore the beauties of the island at all times of the day.

The largest sand island in the world has been a national park since 1973. But until 1991, forestry was practiced here and thus also overexploitation of nature. At that time there were 3,000 kilometers of roads - today there are just 800 kilometers - and a railway. 120 men lived in the now abandoned logging camp; Oxen dragged the felled trees to McKenzie Jetty, where the ferry docked.

The timber industry had a tradition on K'gari since 1863; Not so the sand mining, which started in 1971. After fierce protests from the green movement, he was reinstated in 1976. Today, says Peter Meyer, tourism is bigger and more important than the timber industry ever was.

The photographer and ranger is happy about it. He wants to bring people closer to nature, remind them of their responsibility for the environment - but not with a wagging finger. After all, K'gari's Crocodile Dundee also likes to roar through the landscape in a jeep, enjoying rock 'n' roll over the sand tracks. But the qualified biochemist and ecologist thinks about what he is doing.

The whole island is a kind of living thing to him, and the sandy paths run through it like vital arteries. The idea is no accident. Tells the legend of the daughter of the gods K'gari, who loved the earth so much that her father turned it into an island - with lakes through which she could look up to the sky: Fraser Island, today K'gari.

Peter Meyer likes to tell stories that have their roots in the myths of the Aborigines who once settled on the island. He's pieced together his own Australian mythology and populated it with tree spirits and fairies. The jeep stops abruptly and Peter points to a gnarled tree that looks like a dragon - or more like Falkor, the dragon in The Neverending Story.

But the tree has a second face above the roots: the face of an old Indian. No wonder that the ranger thinks he sees ghosts everywhere in these forests, over which the laughing Hans, a bird of the kingfisher family, pours his chirping mockery.

It's a pristine landscape. This multicolored sand at Rainbow Creek, sometimes light yellow, sometimes ocher, rusty red, nougat brown or golden. The crystal-clear Lake McKenzie in the snow-white sand bed, the transparent freshwater Eli Creek, which is fed by pure spring water, the yolk-yellow sand pyramids of the Pinnacles, on which ancient casuarinas cast their shadows. The treacherous gray mangrove swamps near Kingfisher Bay Resort, where every misstep is dangerous as the dark silt is reluctant to release what it has gripped with smacking satisfaction.

On his forays across the island, Peter explored all of this with his camera, photographed sunsets and wafts of mist, flowers and birds, the picturesque rusted shipwreck of the Maheno - a world without people. The 50-year-old came to photography by chance after having made a living as a tennis coach, bartender and roofer.

It all started when he got his hands on an old camera. Since then he has been taking photos – with growing passion and a lot of love for nature, true to his Tibetan motto: “We only protect what we love. We only love what we understand. We only understand what we study.”

It is a love that leaves little room for other passions. Not everyone can stand life on the island, where there are more dingoes than people. "You can't have everything," says Peter and grins. He chose K'gari, bought land and built a house. He is planning a gallery there with his pictures from the island and from all over the world. Sometimes even an island lover like him has to be among the people.

Entry: Australia can be traveled again without restrictions - without test and quarantine requirements.

Arrival: From Munich or Frankfurt with a stopover to Brisbane, for example with Emirates, Qatar Airways or Singapore Air from 1200 euros. Continue by Greyhound bus to Hervey Bay/River Heads. It takes around six and a half hours and costs from 75 Australian dollars (converted from around 48 euros). This is where the ferry to K'gali starts, the crossing costs about 41 euros per person: sealink.com.au/kgari-fraser-island/ferry-information/

Accommodation: In the "Kingfisher Bay Resort" you pay for the room from 180 euros: kingfisherbay.com

Participation in the trip was supported by Tourism Queensland. You can find our standards of transparency and journalistic independence at axelspringer.com/de/Werte/downloads.

The Great Barrier Reef suffers from coral bleaching. Over 90% of the ecosystem is damaged. The reason for this is that the water temperatures are too high. In order to save the coral reef, science has clear demands.

‹ ›
Keywords:
AustralienLänderporträtsStrandurlaubInselnQueenslandRegionenporträtsFraser IslandKgariPeter MeyerMahenoLake McKenzieWelt NationalparkCrocodile DundeePanorama Of The ChampagneAustraliaSandwegSandinselReise
Your comment has been forwarded to the administrator for approval.×
Warning! Will constitute a criminal offense, illegal, threatening, offensive, insulting and swearing, derogatory, defamatory, vulgar, pornographic, indecent, personality rights, damaging or similar nature in the nature of all kinds of financial content, legal, criminal and administrative responsibility for the content of the sender member / members are belong.
Related News