"Just Stop Oil": who are these environmental activists who attack works of art?

It's a video posted on Twitter, where we see two men dressed in t-shirts bearing the image of the Just Stop Oil collective. 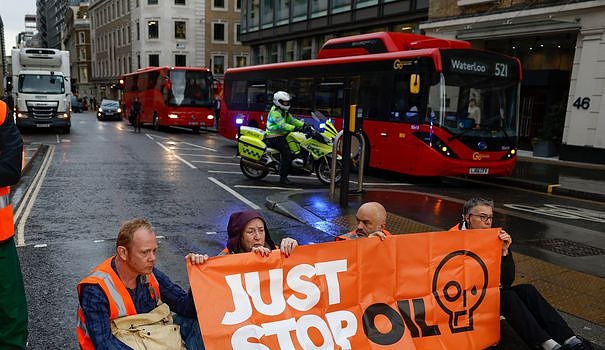 It's a video posted on Twitter, where we see two men dressed in t-shirts bearing the image of the Just Stop Oil collective. The scene takes place on Thursday, October 27 at the Mauritshuis museum, in The Hague, the Netherlands. One sticks his hand on the wall next to the painting Girl with a Pearl Earring by Johannes Vermeer. The other sticks his head on the glass plate protecting the canvas and a third activist empties his neck and throws what appears to be tomato sauce on the board.

According to this video, one of the three men shouts, addressing the visitors of the museum: "How do you feel when you see something beautiful and precious being presumably destroyed before your eyes?". "This painting is protected by glass but the future of our children is not protected," he says.

Police in The Hague said on Twitter that they had arrested three people who targeted this painting for "public violence against property". They are men of Belgian nationality, two aged 45 and one 42. The work, protected under glass, was not damaged, said the Mauritshuis in a statement to AFP. "Art cannot defend itself and attempt to damage it for any cause is something we strongly condemn," the Mauritshuis added.

Civil disobedience movements such as Just Stop Oil, Last Renovation or Scientific Rebellion have multiplied their actions in recent months in Western countries to denounce the inaction of governments and the economic world. Just Stop Oil, born in February 2022, is particularly active. He launched a series of daily actions and blockades in London in early October, including throwing tomato soup at Vincent Van Gogh's Sunflowers painting at the National Gallery in London, or doused an Aston dealership in paint. Martin on October 16.

Just Stop Oil defines itself as "a non-violent resistance movement". It is 'a coalition of groups working together to ensure the government commits to ending all new licenses and consents for the exploration, development and production of fossil fuels in the UK United", can we read on its site. It is made up of rather young, fairly qualified ecologists, even if older people are also activists. All act openly, willingly respond to journalists and claim their actions on social networks. Several Just Stop Oil activists have already been sentenced to prison for their actions.

If Just Stop Oil activists attack paintings in museums, the objective is above all to attract attention in order to create an electroshock. As spotted by franceinfo, one of the spokespersons, Alex De Koning, explains in an interview with Euronews that "the general public is much more indignant for a tomato soup poured on the protective glass of a Van Gogh than for the 33 million Pakistanis displaced by the floods" or for "the drought which affects the harvests and 36 million people in Africa".

As franceinfo specifies, Just Stop Oil is financed by donations, in particular the Climate Energy Fund, the American network created in 2019 of which Aileen Getty, the goddaughter of oil magnate J. Paul Getty, is a member. The latter openly declared that she applauded the action against the Van Gogh painting. "Unfortunately, what we are doing, faced with a multi-billion dollar industry, is very expensive. We need people to fund us, otherwise we will not get anywhere", admits Alex De Koning.

"We must do much more to end the greatest crime against humanity. This is why we are entering the civil resistance. It is no longer a single project or a single campaign, it is acts to resist a government that harms our freedoms, our rights and our future", further indicates Just Stop Oil on its site. "Our government has put in place suicidal laws to ramp up oil production, killing human lives and destroying our environment. I can't challenge this madness from my office designing bridges, so I'm taking direct action," he said. explained on October 17 Morgan Trowland, 39, activist and engineer in bridge design, in a video relayed on the social networks of Just Stop Oil.

Environmental activists have just obtained a first victory. Downing Street has indicated that the new British Prime Minister Rishi Sunak wants to reintroduce the moratorium on the very controversial hydraulic fracturing, which makes it possible to produce gas and oil from shale, lifted last month by his predecessor Liz Truss. This moratorium on hydraulic fracturing was introduced in 2019 by the Conservative executive because of the risk of seismic tremors, but Liz Truss had decided to lift it in England "to strengthen energy security" in the context of the war in Ukraine. The lifting of the moratorium by Liz Truss had angered and worried environmental activists.

Prior to the announcement, activists from the environmental movement Just Stop Oil had glued their hands to the frame of a painting at the Royal Academy in London depicting Leonardo da Vinci's Last Supper on July 5 and dumped paint in the museum to demand the immediate halt to any new oil or gas project. “When I was teaching, I took my students to great institutions like the Royal Academy. But now it seems unfair to expect them to respect our culture when their government is determined to destroy their future by allowing new oil and gas projects," activist and former teacher Lucy Porter, 47, said in a statement from Just Stop Oil.

It was the fifth action of this type in a cultural institution in a week carried out by militants of the organization. The day before, they had covered a painting in the National Gallery in London with an image representing a bucolic landscape massacred by fossil fuels. Just Stop Oil activists had also made a brief intrusion onto the British Formula 1 Grand Prix track at Silverstone on July 3.

They also disrupted several football matches in England. On March 18, activist Louis McKechnie, involved in the action at Silverstone, interrupted the Everton-Newcastle match by tying himself by the neck to a post. He wore a t-shirt emblazoned with the message "Just Stop Oil". "Our government is knowingly destroying my future and condemning billions of people to death around the world," said the 21-year-old activist in the statement released by Just Stop Oil. "Nonviolent civil resistance is the only thing that can save us now."

Prior to the incident at the Mauritshuis museum in The Hague, environmental activists had smeared Les Meules, a painting by Claude Monet from the Barberini museum in Potsdam, Germany, with mashed potatoes. This last incident took place on Sunday October 23 and was claimed this time by the environmental activists of Last Generation, by broadcasting a video of the act.

The local French organization supported by Just Stop Oil is Last Renovation. Since the spring, the environmental activists of this movement have notably interrupted the Roland-Garros tennis tournament, the Tour de France cyclist, a PSG-OM match on October 16 and blocked the Paris ring road. Six activists will be judged on November 22 in the Gers of the chief "obstructing the circulation of vehicles" on the Tour de France.