The presentation of the book Franco's Passive Revolution was held at San Lorenzo by Jose Luis Villacanas, a philosopher from Ubet. 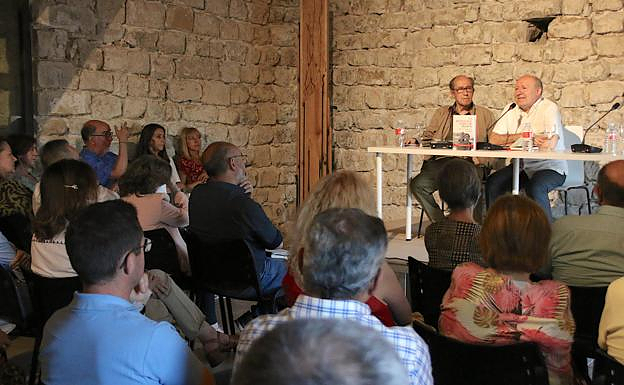 The presentation of the book Franco's Passive Revolution was held at San Lorenzo by Jose Luis Villacanas, a philosopher from Ubet. This book presents a view of the Franco period through the lens of philosophy. It does not seek to provide news from the archive but instead offers interpretation. Luis Foronda from the "Around the Word" Reading Club, who organized the event with the Huerta de San Antonio Foundation, made this clear during the event. Rafael Bellon Zurita, the author, also spoke in the presence of an audience that crowded the space above the temple's sacristy.

Villacanas Berlanga hopes to create a reader and citizen with a mature view of this regime, free from resentment. This will allow them to understand the time and to overcome it. Ubet's philosopher says, "Only the well-remembered is forgotten."

Franco's passive revolution is a book that focuses on the caudillo. It is backed by historical research and reaches a political essay that speaks to the current generation from a republican normativity. The figure of Franco as condottiero is first explained by 'La Vida de Castruccio Castracani’, Machiavelli'. Then, he will let himself be taken in by the ruler drawn in "The Prince" and the meaning of his actions will be considered a new prince.

The second part is an analysis of Franco's constituent role and the meanings of the passive revolution which took place in Spain under his mandate. This is done keeping Antonio Gramsci’s thoughts in mind. In the epilogue, following the script of 'La Mandragora,' the transition is analysed to ask, in the final conclusion, "How long do passive revolutions last? Why are they so unstable? and what is it that places them in danger?" All this is set against the backdrop of the pain of the common classes during the long night of war and its aftermath. This book is different because it offers a different view into Franco's contemporary history.

Franco had a realistic and archaic mentality of power. This he used to manage in an extremely rigorous, cruel, violent and tyrannical manner, according to the book. Franco's goal was to create a sovereign dictatorial government based on the destruction and apoliticalization of the republican people. Analyzing the concept of passive revolution, we also see how the dictator arranges an agenda that includes some elements of the vanquished such as economic reactivation and the extension of education to ensure a passive revolution where the people can't be active. This only works when cultural hegemony is combined with political hegemony. Franco's was not the complete solution. Villacanas Berlanga concludes that it was the elites that realized that a transition was needed.

The writer observes that there is a general climate of contempt for intelligence and a lack of willingness to negotiate. This mentality, which rekindles the arrogant attitudes of Franco's initial regime, has attracted a large part of the population. The philosopher places his bets on intelligence when confronted with these facts. He says that intelligence is simply the ability to see beyond our immediate present and to realize that tragedy can be averted when this mentality is established in a community. He says, "We should be content that everything we have been through so far can be reversible."

Jose Luis Villacanas Berlanga is Professor of Philosophy at Complutense University of Madrid. He was born in 1955. He has been the director of the department now known as Philosophy and Society for more than a decade. His research has three major axes. Hispanic intellectual history is his first focus. Five volumes of the series 'Hispanic Intelligence and Ideas in Time' have been published. He also addresses the imperial history and politics of the West in two works, "Imperial Political Theology and Christian Salvation Community" (2016), which is dedicated to the crisis in the Roman Empire, and "Empire, Reform and Modernity", three volumes that are dedicated to Calvin, Charles V, and Luther and their involvement in the current crisis (2018, 2019, and in press).

The third axis deals with the development of German philosophy from Kant through Blumenberg. It also includes German idealism, irrationalism and Max Weber. There are multiple publications in this area. He is currently working on the Third Imperial Moment, which will explain the present, the irruption and philosophical responses to it.

‹ ›
Keywords:
JosePresentacionLuisUbetenseRevolucionPasivaFrancoFilosofoVillacanas
Your comment has been forwarded to the administrator for approval.×
Warning! Will constitute a criminal offense, illegal, threatening, offensive, insulting and swearing, derogatory, defamatory, vulgar, pornographic, indecent, personality rights, damaging or similar nature in the nature of all kinds of financial content, legal, criminal and administrative responsibility for the content of the sender member / members are belong.
Related News