Italy: Umtiti, unwanted in Barcelona, ​​​​will try to revive in Lecce

Barcelona and Lecce "have reached an agreement for the loan of the defender until June 30, 2023" without an option to buy, the Catalan club announced on their website. 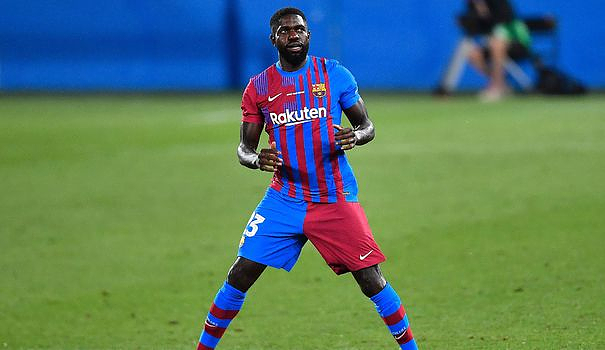 Barcelona and Lecce "have reached an agreement for the loan of the defender until June 30, 2023" without an option to buy, the Catalan club announced on their website.

The Italian formation specifies that the ex-Lyonnais, aged 28, must arrive in the evening to "pass his medical examination".

Umtiti is one of the players that FC Barcelona wanted to see leave before the end of the transfer window on September 1, as part of operations aimed at going below the salary cap and being able to officially register their rookie Jules Koundé.

The president of Lecce, Saverio Sticchi Damiani, stressed on Saturday that he was closely examining the situation of the French international, who is seeking to revive after an almost white season, still disturbed by injuries.

According to Sky Sport Italia and Spanish radio La Cope, an agreement was reached at the end of last week, providing in particular for the payment of the player's salary by the Catalan club. Lecce could pay the Catalans bonuses depending on the Frenchman's appearances.

Trained in Lyon, the powerful French defender joined Barcelona in 2016. Despite a fragile knee, he shone at the 2018 World Cup, notably scoring the winning goal in the semi-final against Belgium (1-0), which had opened the doors to the final against Croatia (4-2) for the Blues.

But he has since chained injuries and played less and less (only 133 matches played in 6 years in Spain), falling back in the hierarchy of defenders in Barcelona. Last season he only played one game, in December 2021.

In January, he had surgery after breaking his foot in training. Just before this umpteenth stoppage, the Spanish club announced that it had extended the player's contract until 2026. This agreement aimed in particular to spread his salary over a longer period, in order to allow the club to remain under the salary cap. .

In Lecce, he will try to reconnect with the competition in a club whose priority objective will be to try to stay in the elite. Serie B champion last season, the Puglia club (south-east of La Boot) is playing its 17th season in Serie A, two years after its last relegation in 2020.

This comeback began with two narrow defeats for the valiant team coached by ex-player Marco Baroni, 58, at home against Inter Milan (1-2), with a goal conceded in added time, then on the Sassuolo ground (0-1).

We will probably have to wait a little before seeing Samuel Umtiti again on the pitch, who has not played a match for more than eight months. But the Frenchman will certainly be one of the curiosities of Serie A where he will be able to meet many compatriots, from the Blues Mike Maignan, Olivier Giroud and Théo Hernandez (AC Milan) to Franck Ribéry, 39, installed since the summer 2021 in Salerno, also in the south of the country.