The ceremony must be held from 08:00 GMT under the golds of the Quirinal Palace in front of the Head of State, Sergio Mattarella. 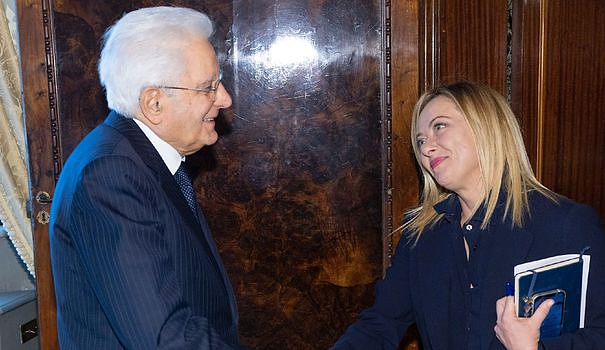 The ceremony must be held from 08:00 GMT under the golds of the Quirinal Palace in front of the Head of State, Sergio Mattarella.

The transfer of power between Mario Draghi and Giorgia Meloni will take place on Sunday at 08:30 GMT at Chigi Palace, the seat of government, and will be followed by the first Council of Ministers.

Ms. Meloni, who with her post-fascist party Fratelli d'Italia won a historic victory in the Italian legislative elections on September 25, was officially appointed head of government on Friday.

The 45-year-old Roman managed to "de-demonize" her party to come to power exactly a century after the fascist dictator Benito Mussolini, of whom she was an admirer.

She has with her coalition partners, the populist leader of the Antimigrant League Matteo Salvini and the declining leader of Forza Italia Silvio Berlusconi, an absolute majority in both the Chamber of Deputies and the Senate.

The list of ministers - 24 in total, including six women - reflects his desire to reassure Rome's partners, worried about the coming to power in Italy, the founding country of Europe, of the most right-wing head of government and the most Eurosceptic since 1946.

Another guarantee in Brussels is Giancarlo Giorgetti, a representative of the moderate wing of the League, already a minister in the outgoing government of Mario Draghi, who inherits the crucial portfolio of the Economy.

As for Matteo Salvini, he was also appointed Deputy Prime Minister, but had to content himself with the portfolio of Infrastructure and Transport while he coveted the more prestigious one of the Interior, which fell to a technocrat.

At a time when the third-largest economy in the euro zone, like its neighbours, is facing a difficult economic situation due to the energy crisis and inflation, Ms Meloni's task promises to be difficult, especially since she will have to ensure the unity of his coalition which is already showing cracks.

MM. Salvini and Berlusconi are reluctant to accept the authority of Giorgia Meloni, whose party won 26% of the vote in the elections, against only 8% for Forza Italia and 9% for the League.

The media have echoed the multiple passes of arms between the three leaders on the distribution of positions in Parliament and in the government.

An Atlanticist herself and in favor of support for Ukraine against Russia, Ms Meloni had to face this week the polemical remarks of Mr Berlusconi, who claimed to have "reconnected" with Vladimir Putin and blamed kyiv for the war.

Statements of the worst effect which forced Ms. Meloni to rectify the situation on Wednesday by affirming that Italy is "fully part and with its head held high" of Europe and NATO.

A talented speaker, this conservative Christian hostile to LGBT rights with the motto "God, fatherland, family" has however promised not to touch the law authorizing abortion.

His government will have to focus above all on the many challenges, mainly economic ones, which await it.

Inflation in the peninsula increased in September by 8.9% over one year and Italy risks entering a technical recession next year, alongside Germany.

Rome's room for maneuver is further limited by a colossal debt representing 150% of gross domestic product (GDP), the highest ratio in the euro zone after Greece.

A notorious Eurosceptic, Ms Meloni has given up campaigning for an exit from the euro, but she has promised to defend her country's interests more in Brussels. And this while growth depends on nearly 200 billion euros in grants and loans from the European Union as part of its post-pandemic recovery fund.