The protests, whose crackdown has left at least 83 people dead, began after the death on September 16 of Mahsa Amini, an Iranian Kurd, three days after her arrest for violating Iran's strict dress code which in particular requires women to wear the Islamic veil. 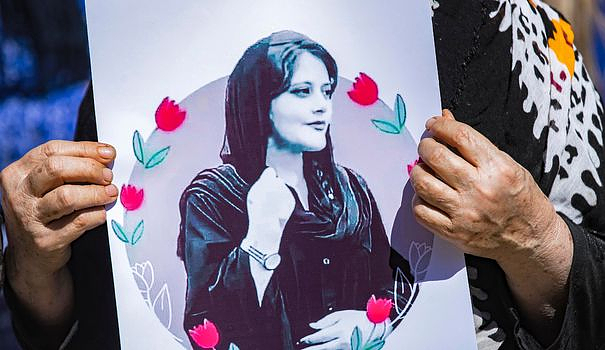 The protests, whose crackdown has left at least 83 people dead, began after the death on September 16 of Mahsa Amini, an Iranian Kurd, three days after her arrest for violating Iran's strict dress code which in particular requires women to wear the Islamic veil.

The power, which denies any involvement of the police in the death of this 22-year-old woman, castigates the demonstrators, qualified as "rioters", reporting hundreds of arrests.

Iran International, a Persian-language television channel based in London, broadcast several videos on Friday, which AFP could not immediately authenticate.

"Death to the dictator", launch bareheaded women in the city of Ardabil (northwest), according to one of them. In Avaz (southwest), the security forces fire tear gas to disperse many people out in the streets to chant slogans against the government, according to another video.

- Attack against a police station -

In Zahedan, in the province of Sistan-Baluchistan (southeast), men came under fire as they threw stones at a police station, according to other images released by Iran International.

The Oslo-based NGO Iran Human Rights said a number of people had been killed in Zahedan.

Meanwhile, Iranian state television said gunmen opened fire on Friday and threw Molotov cocktails at a police station in the same city. "Several police officers and bystanders were injured in the exchange of fire," she added.

According to the Iranian news agency Fars, around 60 people have been killed since the protests began, while the Oslo-based NGO Iran Human Rights reported a death toll of at least 83.

Amnesty International has denounced the use by the security forces of "ruthless" violence, citing the use of live ammunition and lead pellets, beatings and sexual violence against women.

Tehran is "ruthlessly repressing demonstrations (...) in order to quell any questioning of their power", the NGO further deplored on Friday in a press release.

The authorities have also reported the arrest of more than 1,200 demonstrators since September 16. Activists, lawyers and journalists have also been arrested, according to NGOs.

A woman who had lunch without a headscarf in a restaurant in Tehran, whose photo has gone viral on social media, has been arrested, her sister said on Friday.

Security forces also arrested singer Shervin Hajipour, whose song "Baraye" ("For"), made up of tweets about the protests, went viral on Instagram, according to rights group Article 19 and Persian media. based outside Iran.

According to the Washington-based Committee to Protect Journalists, at least 29 journalists have been arrested in connection with the crackdown.

Since the start of the demonstrations, the Iranian authorities have accused forces abroad, including the United States, their sworn enemy, of being behind the rallies or of inciting them.

Iran carried out cross-border strikes on Wednesday that left 13 people dead in the Kurdistan region of Iraq, accusing armed opposition groups based there of fueling the unrest.

The repression of the demonstrations was denounced by several Western capitals where rallies of solidarity with the protest movement took place. New protests are planned for Saturday in 70 cities around the world.

Iranian filmmakers, athletes, musicians and actors expressed their solidarity with the protesters, including the national football team.

In a letter on Friday, however, football fans called on Fifa to ban their football team from taking part in the World Cup in Qatar in November-December due to the crackdown.