Alone in the box, Kunti Kamara, former commander of the Liberian rebel group Ulimo, is accused of having plunged the population of the north-west of the country "into a state of terror" between 1993 and 1994 and of having to "acts of torture and barbarism", in particular two summary executions accompanied, for one of them, by cannibalism. 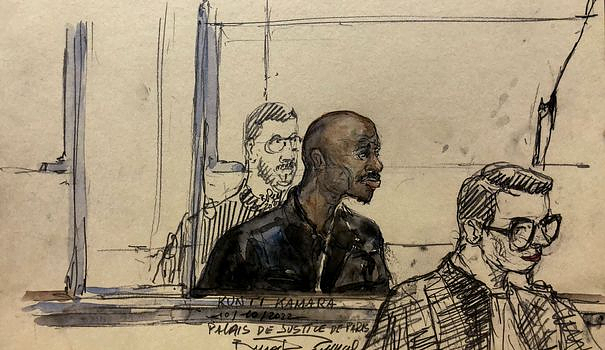 Alone in the box, Kunti Kamara, former commander of the Liberian rebel group Ulimo, is accused of having plunged the population of the north-west of the country "into a state of terror" between 1993 and 1994 and of having to "acts of torture and barbarism", in particular two summary executions accompanied, for one of them, by cannibalism.

According to the indictment, he also allegedly "tolerated" the gang rape of two teenage girls as part of a plan inspired "both by political and ethnic motives", thus making himself guilty of "complicity in crimes against the 'humanity".

"My name is Kunti Kamara": black down jacket and bald head, the 47-year-old accused declined his identity before the Assize Court which will try him for four weeks, in a hearing filmed for historical purposes.

As during the investigation, Mr. Kamara then claimed his innocence. "As I've always said, I'm not guilty of anything," he said, only acknowledging that he was a "soldier" of Ulimo.

“Before God, I repeat that I do not know any of the people” who accuse him, he told the court via an interpreter.

Arrested in 2018 in Bobigny, Mr. Kamara appears more than 6,000 kilometers from his native Liberia under France's "universal jurisdiction" which allows him to judge the most serious crimes wherever they were committed, from then on. that the suspect is arrested on its territory.

Hailed by NGOs as an "important step" against "impunity", this trial will plunge into the first of two civil wars in Liberia (1989-1996), which left 250,000 dead and are among the most atrocious African conflicts.

Despite the recommendations of a Truth and Reconciliation Commission in 2009, these crimes have never been judged by Liberia, whose assize court president Thierry Fusina recalled on Monday the singular history.

The first independent African state, it was created on the initiative of the United States in 1822 to rehouse black slaves who had been freed on American soil.

The facts that will occupy the three magistrates and six popular jurors occurred almost 170 years later.

In 1989, this small West African country saw the emergence of a rebellion led by Charles Taylor who wanted to dismiss President Samuel Doe. A civil war broke out and pitted several factions against each other, including Ulimo, which was then raging in Lofa County (northwest).

It is in this region that the accused, known by the alias "CO Kundi", would have been complicit in a "massive and systematic practice of inhumane acts", according to the indictment of which the president of the court returned the main points in front of impassive jurors.

Mr. Kamara is said to have subjected one of his victims to the ordeal of "Tabé" - which consists of tying elbows and wrists behind his back sometimes until death - before cutting out his heart and eating it.

His trial, which will see victims but also Liberian officials and experts testify, would not have taken place without the Civitas Maxima association, which fights against impunity for the perpetrators of "international crimes".

After collecting testimonies from victims, this NGO filed a complaint against Mr. Kamara in July 2018 in France, where he had resided for two years, leading to the opening of an investigation.

France is not the first country to try crimes in Liberia.

In June 2021, the Swiss justice sentenced the ex-commander of Ulimo Alieu Kosiah to twenty years in prison, a verdict which he appealed. Another executive of this group, Mohammed Jabateh, was sentenced to thirty years in prison in the United States for perjury.

Charles Taylor is serving a fifty-year prison sentence in the United Kingdom for crimes against humanity committed in neighboring Sierra Leone.