India: the source of the Ganges bottled and delivered to your home

Recipients use the precious liquid sparingly to celebrate important occasions, such as births, weddings, funerals, religious holidays or even the acquisition of an expensive good. 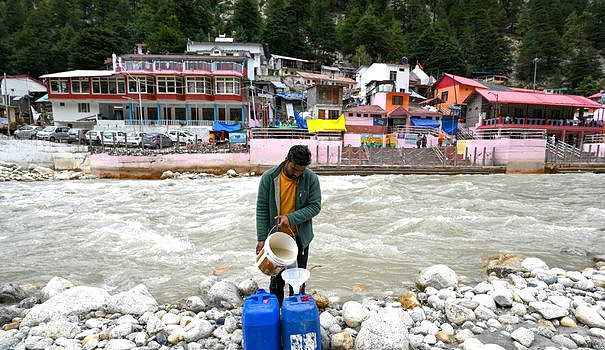 Recipients use the precious liquid sparingly to celebrate important occasions, such as births, weddings, funerals, religious holidays or even the acquisition of an expensive good.

The water is collected from the source of the Ganges, a sacred river for Hindus, which crosses India over 2,500 kilometers.

It is "intended for any Hindu who cannot come here in person," Ramesh, one of the employees of Gangotri, a Hindu pilgrimage town, told AFP.

“I am blessed to be part of an initiative that reaffirms our Hindu faith, delivering this divine water to all corners of the country,” he continues.

This endeavor is one of many, from the most symbolic to the most imposing, initiated by Hindu nationalist Prime Minister Narendra Modi to promote his religion in the officially secular country since its independence 75 years ago.

The water, once in a jerrycan, is transported by truck 100 km downstream to the bottling plant, where it is left for three or four days to settle. It is then filtered before being transferred manually into 30 cl plastic bottles.

The water and the bottle are free, the Hindus who order them only pay the postage, which is the equivalent of one euro. These small bottles, bearing a blue label and sealed with a red cap, have been shipped by the millions since the program began three years ago.

Since Mr Modi came to power in 2014, his government has placed Hinduism at the heart of its plan for the world's largest democracy. India, where 1.4 billion people live, has 98% Hindus for 210 million Muslims.

Mr Modi's biggest religious project is the construction of a grand temple in Ayodhya on the site of a centuries-old mosque destroyed thirty years ago by Hindu fanatics. The attack sparked sectarian violence that left more than 1,000 people, mostly Muslims, dead.

The BJP-led state of Maharashtra is funding the construction off Bombay of a 210-metre, $300 million statue of Hindu warrior king Chhatrapati Shivaji who, in the 17th century , challenged the Mughal Empire with some success.

The 900 km long Chardham highway project in the state of Uttarakhand, intended to facilitate the access of Hindu pilgrims to four sacred temples in the Himalayas, has been approved by the government at a cost of $1.5 billion.

These sites already host hundreds of thousands of Hindus each year, and environmentalists are concerned about the impact of highway and tunnel construction on the region's fragile ecosystem.

Research devoted to the therapeutic virtues of cow urine, a sacred animal in Hinduism, and the quest for "proof" of the veracity of the legends of the Hindu scriptures, are financed by public funds.

Some school textbooks have been rewritten in such a way as to erase the historical role of the Mughal empire in the construction of India. Similarly, towns with Muslim-sounding names are gradually being renamed to take Hindu names.

These "spectacular initiatives (...) forge a majority spirit and perfectly reinforce the feeling that we are now a de facto Hindu country," said Hartosh Singh Bal, political editor for The Caravan magazine.

For him, "Modi knows exactly what he is doing".

"If critics now raise issues for minorities or injustice, they can be labeled as opposing such plans to deliver holy Ganges water - and (thus) silence them."

The recipients of this precious liquid are far from this type of concern, like a postman from New Delhi, Rupesh Kumar, 23, who notably delivers holy water, which gives him the feeling of have "additional responsibility".

“We also used Ganges water in my family for all special and religious occasions,” explains to AFP and “people are often very grateful and polite when I deliver these bottles to their homes.”