In Zaporijjia, a refuge for those fleeing the Russian occupation

Making stuffed animals helped her family keep their minds clear during the long months under Russian occupation in the Kherson region of southern Ukraine. 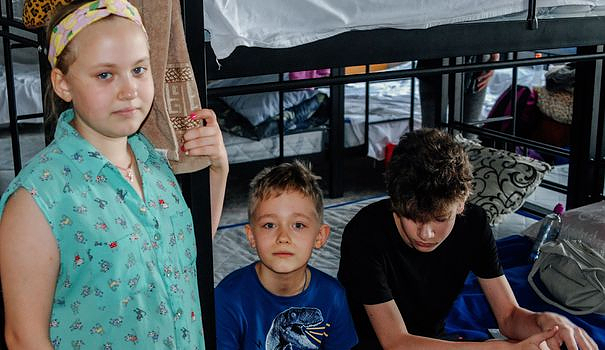 Making stuffed animals helped her family keep their minds clear during the long months under Russian occupation in the Kherson region of southern Ukraine.

AFP was able to meet the family a few hours after their arrival in Zaporijjia, a city under Ukrainian control located 250 kilometers from their home.

After three months of survival with little food and no internet or mobile connection, Iryna decided to leave with her mother and her 10-year-old daughter, Veronika.

From the first days of the invasion launched at the end of February, troops from Moscow seized almost the entire region of Kherson, one of the only major cities under Russian control.

Ukrainian forces say they are carrying out a slow counter-offensive in this region aimed at retaking Kherson, and have repeatedly targeted bridges in the area to break Russian supply chains. kyiv claims to have taken over dozens of villages.

"We are calling on people to leave. Military operations cannot be carried out here without endangering civilians," Yaroslav Yanushevich, head of the Kherson regional administration, urged Sunday at a center for displaced people in Zaporizhia.

"A harsh winter awaits us and we need help to save us from the cold and from the enemy, who will only increase the pressure", abounded the Deputy Prime Minister Iryna Verechchuk, at his side.

According to Ukrainian authorities, 24,000 Kherson residents have fled to Zaporizhia in the past month.

During Mrs. Vereshchuk's visit to the center for the displaced, a woman, holding a small dog with a pink bow, burst into tears.

The center, called "Ia Kherson" ("I am Kherson"), accommodates hundreds of people, housed on bunk beds.

Anastasia Protassova, 25, flashes back to life under Russian occupation in Kherson, where she says she saw signs that read "Russia is here forever".

Russian officials had announced their intention to organize in Kherson a referendum of attachment to Russia, such as that organized in Crimea in 2014 before the annexation of this peninsula.

This desire has prompted, according to the Ukrainian authorities, many inhabitants to leave. But leaving Kherson is not easy.

Before the war, the trip would have taken about four hours. Today, it takes a day, some displaced people having sometimes waited several days in the queue at the checkpoints, held by the Russians.

"They asked me questions, they wanted to know why I was leaving. I said: because I'm scared," she says.

The soldiers answered him: "What are you afraid of? On the contrary, we don't touch people like you. We protect them".

"I kept silent, because I had my child with me," she adds.