Like many Brazilians, these natives of the Kambeba people vote in a school. 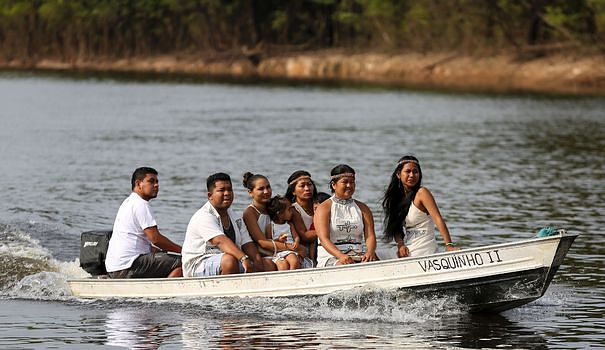 Like many Brazilians, these natives of the Kambeba people vote in a school. But to get there, they have to navigate to the nearby village.

"For us, the natives, it is important to fight for democracy, to vote and to choose representatives who respect us," Raimundo Cruz da Silva, 42, vice-Tuxaua (equivalent to a cacique) of the Kambeba.

Dressed in a white shirt with vertical stripes of green tribal patterns, he does not hide that he will vote for Lula, the opponent of far-right president Jair Bolsonaro.

The latter is highly criticized by many indigenous leaders, including the emblematic cacique Raoni Metuktire, who filed a complaint against him for "genocide" at the International Criminal Court in The Hague.

Três Unidos, the village of Raimundo Cruz da Silva, where some 115 indigenous people live, is located on a reserve about 60 km from Manaus, capital of the state of Amazonas (north).

About forty people leave to vote at the same time, aboard four boats.

Along the dark waters of the Rio Negro, they see lush emerald green vegetation as far as the eye can see, before arriving at Sao Sebastiao, a village located outside the indigenous reserve.

- "Looking towards the Amazon" -

It's a special day for Taynara da Costa Cruz, 18, who will be voting for the very first time.

"For us young people, it's very important to vote. We vote, looking towards the Amazon, the indigenous peoples", says this young craftswoman with sparkling light brown eyes, who wears a necklace and a headband. made from seeds from the Amazon.

All the women of the Kambeba people are dressed in long white dresses.

Upon her arrival in Sao Sebastiao, this 38-year-old nurse proudly displays her voter title.

"We need to have good representatives, it's an important day. We, the natives, must show that we are capable of resisting," she says.

Shortly after his election at the end of 2018, Jair Bolsonaro promised that he would not cede "not one more centimeter" to indigenous lands.

He also showed himself in favor of mining or agricultural exploitation in these territories supposed to be reserved for the traditional activities of the natives.

Under his tenure, which began in January 2019, average annual deforestation has increased by 75% compared to the last decade.

Lula's environmental record is far from flawless, but the former president (2003-2010) promised during his campaign that he would create a ministry for indigenous peoples, with an indigenous personality at its head.