In Pennsylvania, the battle for the right to abortion at the heart of the elections

For this divorced mother of three, "everything changed" at the end of June, when the United States Supreme Court blasted the 1972 "Roe v. 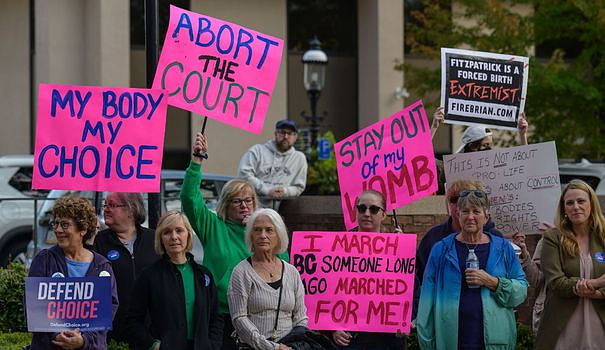 For this divorced mother of three, "everything changed" at the end of June, when the United States Supreme Court blasted the 1972 "Roe v. Wade" case law, which guaranteed this federal right, and referred the question to each state .

"It was like a slap in the face. I thought it was something untouchable (...) that it would never happen in my life," she says. No more question for her to vote for Donald Trump's party, which she had chosen in 2016 and 2020. "It's just not who I am," she says.

In the state of Pennsylvania (northeast), where a close battle is looming for a key senator seat for the majority in the upper house in Washington, the Democrats have identified the issue and their campaign sometimes takes on the appearance of referendum to save the right to abortion, in a context of high inflation which is not favorable to them

Like during this meeting in Doylestown, a peaceful suburb north of Philadelphia, where the political branch of the family planning organization Planned Parenthood lends them a hand.

"Our patients do not come to our health centers for political reasons" or "for religious reasons: they come because they need care", launches its vice-president Lindsey Mauldin, pink t-shirt from her organization under a white jacket.

"Patients arrive from Ohio or West Virginia", the neighboring states which have restricted or prohibited abortion, she adds to AFP. Now, "Pennsylvania is a vital state for this care in the northeastern" of the United States, even if it has less than 20 clinics which provide it for 13 million inhabitants.

Amid signs "My body, my choice," Angela Jacobs, a 51-year-old stay-at-home mom, says it's the first time she's committed.

"I had an abortion at just over 20. For years I felt a lot of shame and never talked about it. Now I have a 20-year-old daughter and I want it to be accessible if she should need it,” she explains. Losing that choice, "women can't afford it."

University of Pittsburgh history professor Lara Putnam notes that since the Supreme Court ruling, Democrats have won more voters registering on the voters list -- and indicating their political affiliation -- than Republicans.

"A clean break" that temporarily reverses a structural trend in the state, where Democrats have seen their old industrial-age base shrink for decades, she said.

Enough to tip the scales in the vote? Near Doylestown, in front of his roadside house, Randy Charlins, a 61-year-old Republican voter, hardly believes it.

For this bar manager, "Dr Oz", the nickname of Mehmet Oz, TV star doctor invested by the Republicans, "will be elected" against Democrat John Fetterman, another atypical candidate, former mayor of a small town who suffered from deindustrialization, known for his colossal build and his hoodies.

"It's very tight. But I think there is a silent majority. There are a lot of conservatives who are silent because they are afraid", he assures, on the porch of his house, where the garlands are already piling up for Christmas.

For Randy Charlins, the problem remains inflation, which is confirmed by a national poll by Siena College on Monday in the New York Times: 18% of voters make it their priority theme, against 5% for abortion.

"I see my clients, who came maybe three times a week (...) now they only come once. Inflation affects my income, but also that of my boss, it means that he does not can't raise me", he describes.

As in the rest of the country, Republicans have muted their positions on abortion, aware that it could cost them votes.

Their campaign clips mainly focus on the fight against crime and inflation, brandishing the threat of the legalization of all drugs and an explosion of insecurity with John Fetterman.

The Democrats readily recall that Mehmet Oz and the Republican candidate for governor in Pennsylvania, Doug Mastriano, have taken a stand for restrictions or an almost total ban on abortion.

Pennsylvania had given Donald Trump a slight advantage in 2016, before placing Joe Biden narrowly in the lead in 2020.