In front of the "housing support space" of the Aix-Marseille-Provence metropolis, near the Old Port, the stories are like the poorest big city in France, which concentrates all forms of poor housing. 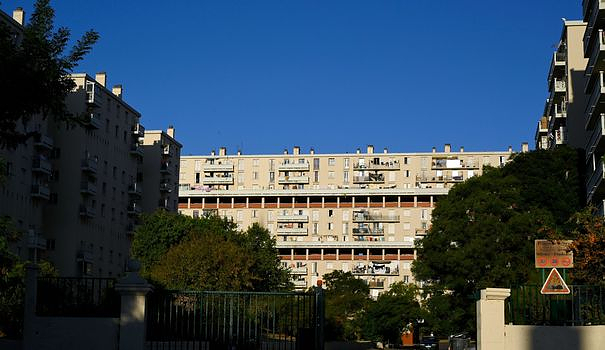 In front of the "housing support space" of the Aix-Marseille-Provence metropolis, near the Old Port, the stories are like the poorest big city in France, which concentrates all forms of poor housing. Two figures sum up the crisis: 40,000 slums and as many outstanding social housing applications.

This subject will be at the heart of "general meetings" organized for the first time on Monday and Tuesday by the left-wing municipality which conquered the city in 2020, two years after the fatal collapse of two dilapidated buildings in the center, rue d' In prison.

Sitti Ahmed has been waiting for eleven years for an HLM on the ground floor suitable for her autistic son who "tries to climb on the windows".

"Once, I was offered something but very high. I refused and since that day, nothing." This 50-year-old woman therefore continues to live with her six children in a "very humid T4 in Rosiers", one of those degraded private condominiums known to be a haunt of slum landlords in the poor districts of the north.

Its rent is certainly minimal (226 euros/month). But in Les Rosiers some pay up to 700 euros per month for an unhealthy T3, according to testimonies from tenants and social actors.

At the housing support space, Rachid*, 49, comes out disappointed. He wanted to file a first request but there were too many people.

“I sleep outside,” confides this frail gentleman with thick glasses. "I am a French citizen, I volunteer four days a week at the Restos du Coeur, I help people, does that count for society? The administration?", he wonders, faced with steps that seem unattainable.

Meddou Smail, co-responsible for Restos du Coeur in the 3rd arrondissement, accompanies him. He would like to at least find her a temporary hotel room via the social Samu, but the system is saturated. "I call them every morning, but I never heard a voice behind 115. Once I waited 2:28...".

"Housing is the first stone" for people in difficulty, insists the volunteer: "But in my city it's really sad. We try to help them but they come back to the restaurants the next day, in tears".

Plaintiffs in tears, AFP came across some on the sidelines of Emmanuel Macron's visits for his "Marseille en grand" plan, to catch up with the abyssal delays of the second French city in terms of schools, transport, housing.

Like this mother, who brandished photos of the arms of her children devoured by bedbugs invading her social housing, despite 20 disinsections. Or this other, also begging that he be assigned another HLM, to flee his city plagued by drug trafficking.

"We can no longer meet the needs of our fellow citizens, we no longer produce enough social housing to accommodate them", especially in the coastal departments, said regional prefect Christophe Mirmand to AFP.

"The crisis is acute and can only be resolved by a very vigorous revival of construction", he insists, regretting the development of "speech hostile to social housing, and more broadly to the arrival of new inhabitants".

The first "urgency" is for the Aix-Marseille-Provence Metropolis, chaired by Martine Vassal (Les Républicains), to adopt a Local Housing Plan (PLH), a key tool for defining the housing strategy in a territory, in the first half of the year. 2023, adds the prefect.

But also that everyone takes their part, while around thirty municipalities out of 92 do not have the quota of social housing required by law: "We need a very strong political commitment (...) and support these municipalities in order to 'avoid a flight strategy', he insists.

Marseille offers an annual production of 4,500 homes, but wants other municipalities to play the game.

As part of the future PLH 2023-2028, the Metropolis would commit to an annual rate of 11,000 housing units, reveals to AFP David Ytier, vice-president in charge of the file. But by doing "lace", because "we are not going to solve the problem of Marseille by creating 10,000 housing units in the north of the metropolis".

* Fearing negative consequences on their applications for social housing, Karim and Rachid preferred to keep their names silent.