In Florida, the hunt for Burmese pythons to help the ecosystem but also mental health

When he's not managing cultural events in Miami, Mr. 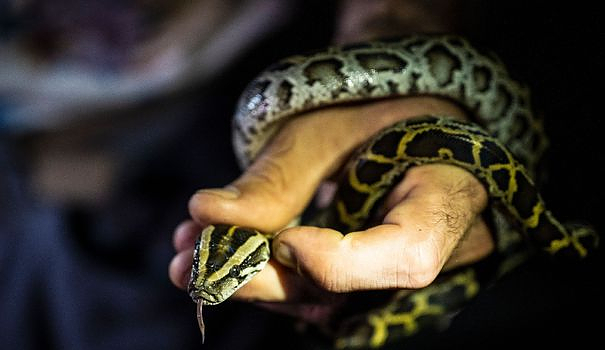 When he's not managing cultural events in Miami, Mr. Galan, 34, pursues these nocturnal reptiles from Southeast Asia as a professional hunter.

Hired by the Florida Fish and Wildlife Agency (FWC), he is helping reduce the number of these constrictor snakes, which number in the tens of thousands in the state, experts say.

At night, Enrique Galan travels for miles on paved roads and gravel paths. He drives slowly, observing with his torch the grass, the roots of the trees and the banks of the canals where the eyes of alligators shine here and there.

Its price: 13 dollars per hour and a supplement per python found, 50 dollars if it measures up to 1.2 meters, and 25 dollars more for each additional 30 cm.

This August evening, Mr. Galan is all the more motivated because the FWC has launched a python hunting contest in which some 800 people participate for 10 days.

The reward is 2,500 dollars for the one who finds and kills the most pythons in each category: professionals and amateurs.

Enrique Galan would love to earn this money to celebrate the recent birth of his son, Jesus.

Burmese pythons were introduced to the region probably as pets at the end of the last century.

Once released into the Everglades in the 1970s, they quickly reproduced, having no predators to hunt them, and became a threat to this fragile wetland ecosystem.

These snakes feed on other reptiles, birds and mammals such as raccoons and white-tailed deer.

Those in the Everglades average between 6 and 9 feet long, but finding them at night in this 607,000-hectare area is like looking for a needle in a haystack.

After two fruitless nights, Enrique Galan spots, thanks to his trained eye and his patience, a shadow on the side of the road. In a few seconds, he jumps from his van, runs and throws himself on the animal, a baby python.

He grabs the back of its head to avoid biting it and observes it with satisfaction before putting it in a canvas bag which he ties. He will later kill him with an air gun.

A few kilometers further, a huge python slides on the asphalt. Enrique Galan storms out of his vehicle again, but this time the snake escapes him and disappears into the grass, leaving behind a strong musky smell. A defense mechanism.

But he claims to have learned everything thanks to Tom Rahill, 65, whose association Swamp Apes helps veterans to fight against their traumatic memories thanks to... hunting pythons.

For several hours, Rahm Levinson, an American veteran of the war in Iraq, hunts snakes alongside Tom Rahill and Enrique Galan, among the only members not to have passed through the army.

"It helps me deal with a lot of things at home," says Mr Levinson, 41, who suffers from post-traumatic stress disorder. "I can't sleep, and having someone to go out with at midnight or two in the morning to hunt pythons is productive and beneficial."

"Sometimes, when my legs are up to my knees in the swamp, I feel at peace," agrees Mr. Galan.

The hunter is also proud to participate in efforts that have eliminated more than 17,000 pythons since 2000, while spending time in the wild.

"One of the best things I get out of it is the amount of beauty that surrounds me," he says. "If you look closely, open your eyes and observe, you will see a lot of magic here."