Here the Dolomites show themselves from their most beautiful side

In South Tyrol there are Instagram and postcard motifs all the time, but one picture stands out: the idyllic Funes Valley with its farms and hamlets in the middle of gentle meadows and dense forests and above it a jagged ridge of rocks. 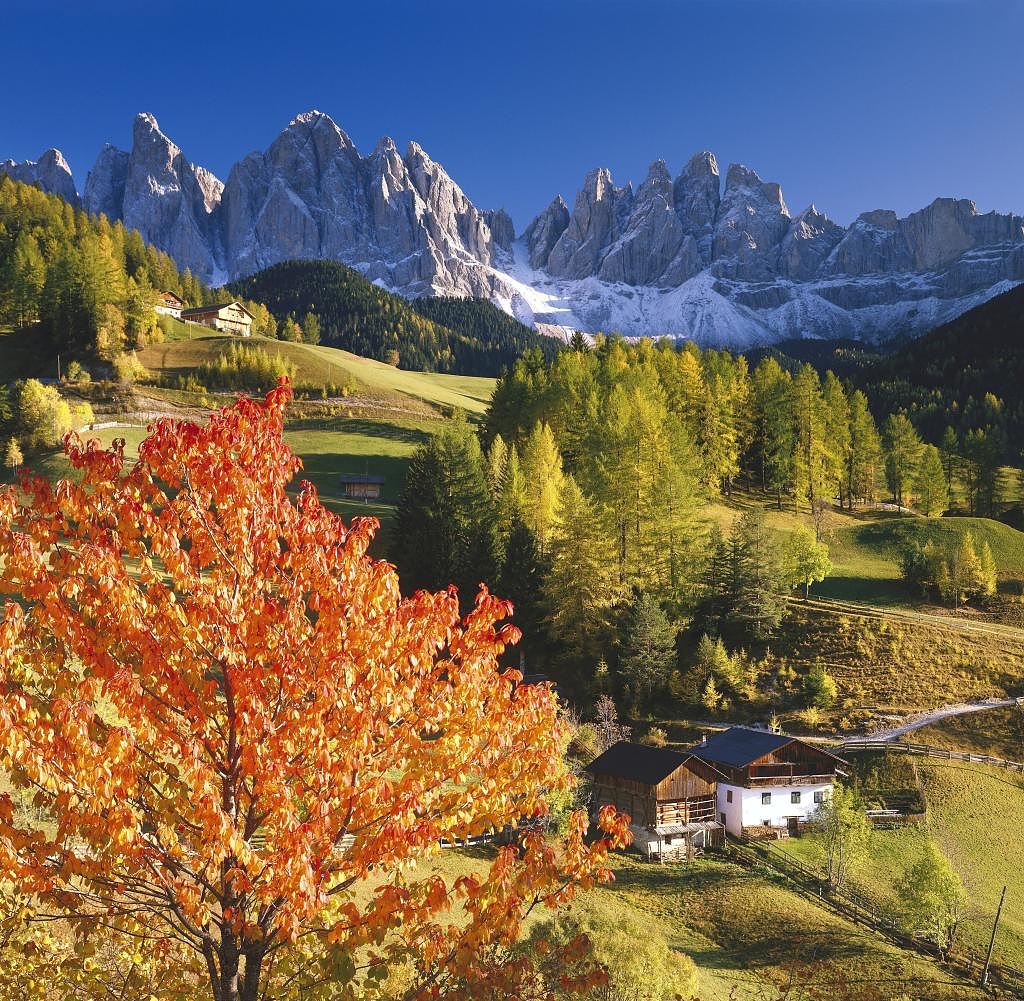 In South Tyrol there are Instagram and postcard motifs all the time, but one picture stands out: the idyllic Funes Valley with its farms and hamlets in the middle of gentle meadows and dense forests and above it a jagged ridge of rocks. "The Geisler peaks are the world's most widely published photo motif of the Dolomites," explains Oskar Messner, "even ahead of the Three Peaks".

The explanation is obvious to him: "The Three Peaks show a rugged mountain landscape, a highlight for every alpinist. But in the Villnöss valley I see not only the striking rocky peaks, but also forests, houses and meadows. This cultivated landscape cultivated by farmers makes the motif more inviting – and holiday tangible”.

Of course, Oskar Messner's assessment is subjective, after all he grew up here and is proud of his homeland, but it is understandable. In the Villnösstal not far from Brixen you can experience the Dolomites from their most beautiful side: magnificent, fascinating and original.

Gentle tourism is the buzzword that is justified here on the edge of the 10,500 hectare Puez-Geisler nature park. Luckily, the Villnössers slept through the big development wave with lifts and slopes, so that the untouched nature is their greatest asset today. A capital that becomes more valuable year after year.

A stroke of luck for vacationers who are looking for peace and solitude instead of noise and hustle and bustle. The wonderful silence in the valley surprises again and again. Of course, word has gotten around about the possibilities, but ski tourers, winter hikers and snowshoe hikers are spread out very well.

Even on the Großer Gabler, at more than 2500 meters the highest peak of the Plose, which is better known for its ski area, it is surprisingly quiet. On the Gabler, the lifts feel very far away, instead some ski tourers enjoy the sunny, almost endless XXL slopes with various downhill runs and the dream view of the Kleinen Peitlerkofel, perhaps the sportiest ski tour destination in Villnösstal.

A dream that continues in the evenings at Oskar Messner's Pitzock restaurant. It used to be a regular bar that his father opened in 1964. At the end of the 1990s, Oskar got involved and brought some momentum into the store with happy hours and live bands. "But then I got to a point where I had to change something," recalls the trained chef, "so the idea of ​​a restaurant matured and in 2004 I opened the Pitzock."

Even back then, his philosophy included working with local producers, so it wasn't long before he became aware of the Villnösser Brilleschaf. "For me, it was first of all the sheep that have always existed in the valley," recalls the chef, who was awarded two toques by Gault-Millau, "but then I learned that it was the oldest South Tyrolean sheep breed, the is also threatened with extinction".

The Villnösser Brilleschaf has tasty, fine-grained meat, but it is primarily a wool breed. Wool no longer had any value a few years ago, and the farmers even had to pay for its disposal. "Our concern is to preserve the tradition of sheep farming, and we do that by guaranteeing purchase at a fixed price throughout the year," explains Oskar, "so the farmer can calculate again".

The meat is processed and refined, the wool further processed - the Villnösser Brilleschaf project was rewarded in 2011 with inclusion in the "Presidi Slow Food" group. For Oskar Messner, the award was an incentive for the next project. "We want to make the Villnösstal the first 'Slow Food Travel' region in South Tyrol," he says, "our goal is sustainable tourism that also gives room for the appreciation of the work on the farm."

Of course, this also includes an untouched mountain world, which turns into a ski touring paradise in winter. While at the Zendleser Kofel, by far the most popular ski touring destination in the Funes Valley, or on the neighboring Medalges ridge, you look at the cliffs of the Dolomites from a distance, you are in the Mittagscharte right in the middle of this unique mountain world. The five kilometer long rock barrier of the Geislerspitzen has exactly one weak point with the Mittagscharte - and this attracts tourers with a north-facing dream slope with guaranteed powder snow.

Just great, just like the valley, where neither massive hotel buildings nor cable cars or leveled slopes spoil the harmonious impression. Here, on the one hand, value is placed on tradition, on the other hand, people are open to new things. "With the construction of our district heating plants, we had fiber optics laid at the same time - we were the first in South Tyrol with broadband in the Villnöss valley," says Engelbert Weirather proudly, "all our huts and alpine pastures are connected to the sewage system - and to the electricity grid."

As a mountain guide, he skis in his home mountains as often as possible - and he also sits on the board of directors of Energie Villnöss. There are now three hydroelectric power plants, two district heating plants and a photovoltaic system - the valley has been energy self-sufficient for years. "In addition, the power lines were laid underground throughout the valley," he says happily. Maybe that's why the postcard motif is so unusual: Not a single line disturbs the dream view.

Arrival: via the Brenner autobahn to the Klausen exit and on to the Villnöss valley. By train to Brixen and by bus every hour to Villnösstal.

‹ ›
Keywords:
ItalienLänderporträtsSüdtirolRegionenporträtsDolomitenSkiurlaubWintersportSkigebiete
Your comment has been forwarded to the administrator for approval.×
Warning! Will constitute a criminal offense, illegal, threatening, offensive, insulting and swearing, derogatory, defamatory, vulgar, pornographic, indecent, personality rights, damaging or similar nature in the nature of all kinds of financial content, legal, criminal and administrative responsibility for the content of the sender member / members are belong.
Related News