With the symbolic opening of a gas tap, Federal Minister of Economics Robert Habeck (Greens) received the first hydrogen test delivery from the United Arab Emirates on Friday at the premises of the Hamburg copper manufacturer Aurubis. 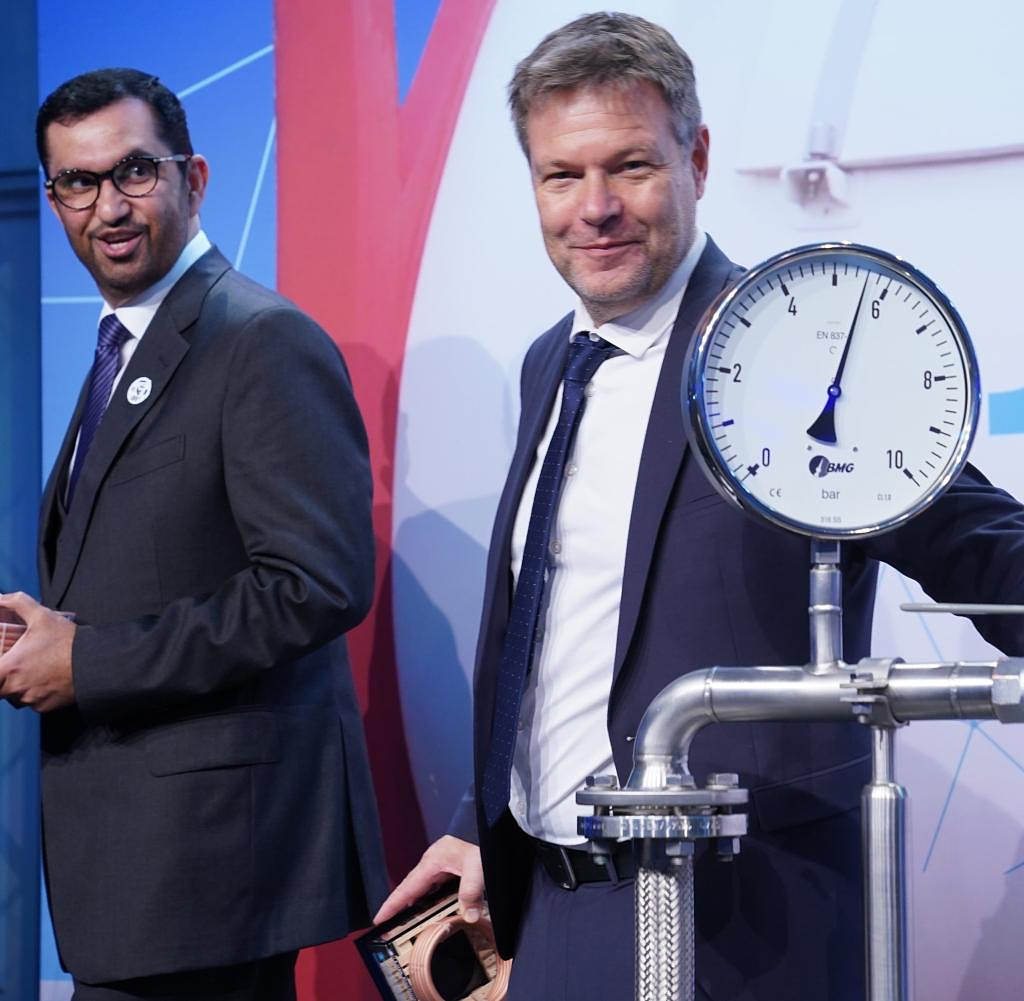 With the symbolic opening of a gas tap, Federal Minister of Economics Robert Habeck (Greens) received the first hydrogen test delivery from the United Arab Emirates on Friday at the premises of the Hamburg copper manufacturer Aurubis. It is the prelude to further deliveries that Habeck agreed to during a trip to the Gulf States in the spring and which is considered a test run for the development of a hydrogen value chain between Germany and the UAE.

"Now more than ever, we need to advance the ramp-up of hydrogen," said Habeck, who came to Aurubis together with the Minister of Industry of the Emirates, Sultan Al Jaber, and Hamburg's Mayor Peter Tschentscher (SPD). In Germany, its own production of “green” hydrogen is being set up. "But of course we also need hydrogen from imports above all." "Green" hydrogen produced with green electricity should help in the future to do without fossil fuels in industrial production.

Sultan Al Jaber emphasized that his country has invested heavily in the development of hydrogen technology and that he intends to continue driving this together with the German partners in the future. Habeck signed several partnerships in Abu Dhabi in mid-March to set up a hydrogen value chain between Germany and the United Arab Emirates.

The first test delivery from the UAE is still so-called blue hydrogen, which is not produced using renewable energy like the "green" one, but with natural gas. The hydrogen supplied by the Abu Dhabi National Oil Company was shipped in the form of the hydrogen derivative ammonia and was handled by the Hamburg port logistics company HHLA in September. Compared to hydrogen, ammonia is easier, more efficient and cheaper to store and transport.

Aurubis will use the hydrogen for an initial eight-week test run for the climate-neutral conversion of copper wire production. "We want to produce in a climate-neutral manner - well before 2050," said Aurubis CEO Roland Harings. The aim of the pilot project is to show: "The development of a "blue" and, in the future, "green" ammonia value chain between Germany and the United Arab Emirates is not only theoretically possible, but also works in practice."

The Hamburg Senate wants to turn the Hanseatic city into a hydrogen hub and is planning to set up its own production facility with a so-called electrolyser in the port. "Hamburg aims to become a leading hydrogen location in Europe," said Mayor Tschentscher. The port offers the best conditions for the import and sale of renewable energy sources. "As a globally networked trade and logistics metropolis, Hamburg can contribute its expertise to the energy partnership between Germany and the United Arab Emirates."

The German Federation for the Environment and Nature Conservation (BUND) criticized the first ammonia test delivery. "The production of hydrogen from natural gas consumes enormous amounts of natural gas not only for the end product, the hydrogen, but also for the production process under high pressure and high heat," said BUND country manager Lucas Schäfer.

In addition, there is the energy loss for the conversion of hydrogen into ammonia for transport as well as for the CO₂ capture and underground storage of the greenhouse gas. Overall, "blue hydrogen" is more than 20 percent more harmful to the climate than the direct combustion of coal or natural gas.

‹ ›
Keywords:
EnergiekrisenHamburgHabeckRobertVereinigte Arabische EmirateRusslandUkraineKrieg (24.2.2022)
Your comment has been forwarded to the administrator for approval.×
Warning! Will constitute a criminal offense, illegal, threatening, offensive, insulting and swearing, derogatory, defamatory, vulgar, pornographic, indecent, personality rights, damaging or similar nature in the nature of all kinds of financial content, legal, criminal and administrative responsibility for the content of the sender member / members are belong.
Related News