Gender-based violence: demonstrations in several cities against the "impunity" of the attackers

Five years after the emergence of the movement</p>Faced with sexist and sexual violence, which "finds its roots in patriarchy", "the institutions are not up to it", denounce the organizers. 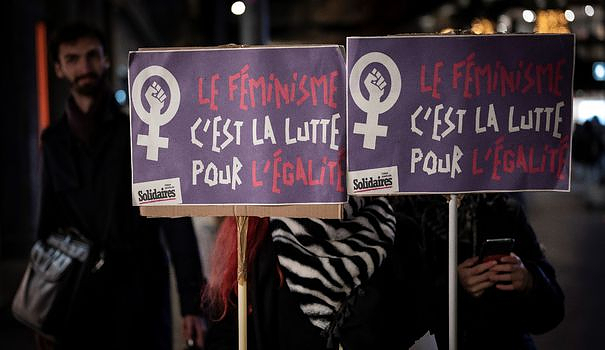 Five years after the emergence of the movement

Faced with sexist and sexual violence, which "finds its roots in patriarchy", "the institutions are not up to it", denounce the organizers.

In police stations, courts or within political parties, "the last few months have proven to what extent the voices of victims of gender violence have been called into question", they protest.

"What makes us angry is the impunity of the aggressors and the mistreatment reserved for the victims" when they file a complaint, explains to AFP Maëlle Noir, member of

"We are constantly told that justice must do its job, but what job? We cannot blame the victim for not filing a complaint if she knows that it will lead nowhere", protests the activist.

To fight against violence, the associations are calling for a public budget of two billion euros per year, but also a "framework law" which would notably establish "brigades and specialized courts", financial aid for "safety" women victims, 15,000 additional dedicated accommodation places or the strengthening of education in sexual and emotional life at school.

Asked about these demands, the minister responsible for gender equality, Isabelle Rome, recalled that she was open to the establishment of specialized police and justice. A parliamentary mission is working on the subject and must submit its conclusions to the government in a few months for a "more responsive and efficient justice", she underlined Saturday at the microphone of RMC.

As for the financial means, "they have not stopped increasing", to reach "a total amount of 2.4 billion" euros "when we add up the sums put in by each ministry", observed the minister, who recognized however that these sums are “not specifically” dedicated to the fight against violence, but include broader fields, such as education and “economic equality”.

In 2021, the mobilization - organized ahead of November 25, world day for the fight against violence against women - had gathered 50,000 people in Paris according to the organizers, and 18,000 according to the police headquarters.

A year later, the exasperation of feminist organizations is still as strong, fueled by the high number of feminicides - already 100 since the beginning of the year according to an associative collective, against 122 last year according to official figures - , and by the reluctance of the political world to dismiss certain officials accused of violence against women.

The facts denounced are however more and more numerous: between 2017 and 2021, the number of rapes or attempted rapes recorded by the Ministry of the Interior doubled, from 16,900 to 34,300. The victims are more likely to denounce old facts, explains the ministry, which also sees in it the sign of "freedom of speech".

An expression that now exasperates associations, because "women have always spoken, but they are not listened to", points out Maëlle Noir.

In the world of work too, the fight against gender-based violence is progressing too slowly, pointed out the main French unions in a letter sent Thursday to the Prime Minister.

Prevention policies are still insufficient there, and when a problematic case is reported, "instead of suspending, then sanctioning the employee in question, we often continue to move, discredit, even placardize or dismiss the victim", deplore the petitioners.