From schoolgirls to housewives, the fate of Afghan women under the Taliban regime

Since the Taliban regained power in Afghanistan in August 2021 and banned secondary schools (middle and high school) for teenage girls, many of them have been forced into marriage, often to much older men chosen by their fathers. 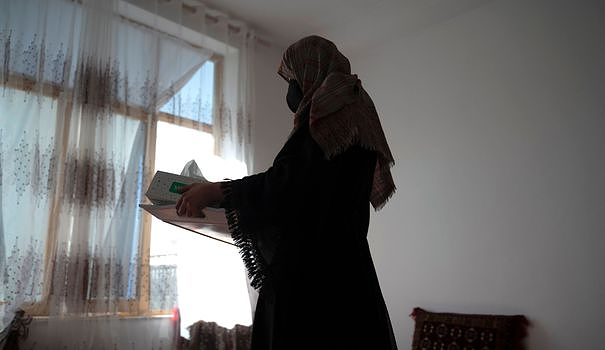 Since the Taliban regained power in Afghanistan in August 2021 and banned secondary schools (middle and high school) for teenage girls, many of them have been forced into marriage, often to much older men chosen by their fathers.

"I cried a lot and I kept telling my father that the Taliban were going to reopen schools for girls," Zainab said from Kandahar city in southern Afghanistan.

"But he replied that it was not going to happen and that it would be better if I got married, rather than staying idle at home".

Her marriage was concluded a few hours after the arrival of the future groom with some sheep and goats, as well as four bags of rice as a dowry for the family of his wife.

As tradition dictates, Zainab has moved in with her in-laws where she lives with her husband who is 17 years her senior. "No one asked my opinion," she explains.

With the return to power of the Taliban and their ultra-rigorous interpretation of Islam, Afghanistan has become the only country in the world where secondary school is prohibited for girls.

In a deeply patriarchal society hit by an economic crisis, many parents have accelerated the marriages of adolescent girls, most of the time confined at home by bans imposed by the Taliban.

"In my parents' house, I used to get up late...Here everyone scolds me," Zainab told AFP. "They tell me: We have spent so much on you and you don't know how to do anything".

Parents increasingly feel there is no future for girls in Afghanistan, said Mohammad Mashal, head of a teachers' association in Herat.

"They think it's better if their daughters get married and start a new life."

In March, authorities canceled the reopening of schools for girls, saying the ban was only temporary. But a litany of excuses have been offered to justify the closure and for many teenage girls it is already too late.

“I never imagined that I would stop school to become a stay-at-home mother instead,” explains Maryam, whose first name, like that of the other testimonies, has been changed for security reasons.

“My parents always encouraged me, but faced with such a situation, even my mother could not oppose my marriage,” says Maryam.

The young girl, who had just left school at 16, was educated in a village until her parents decided to move a few years ago to Charikar, the capital of Parvan province, so that their children can study at university.

"Instead of studying, now I do the dishes, the laundry and the floor. It's so hard," she said as she served breakfast to her father Abdul Qadir, 45.

"I wanted them (Maryam and her sisters, editor's note) to finish their university studies because I had worked hard for it and already spent so much money on them", explains the father. "But my previous experience with the Taliban tells me that they will not reconsider their decision."

This civil servant, whose salary was almost halved under the Taliban regime, had to sell some goods to feed his family, who live in a rented apartment.

"In Afghanistan, girls don't have many opportunities and marriage proposals stop after a certain age," he explains.

Early marriages, particularly common in rural areas of Afghanistan where dowries are given to brides' families, are a vital source of income.

But they are not without consequences: they increase infant and maternal mortality rates.

Since the departure of foreign forces from the country, the international aid on which the Afghan economy depends has been largely cut off, which has generated mass unemployment and left half of the 38 million inhabitants facing starvation, according to humanitarian organizations. .

By sacrifice, some young women offer themselves in marriage, in order to provide their families with a rare source of income.

"(My father) didn't force me, but the situation was such that I accepted a proposal and got engaged," said Sumayya, 15, in Kabul.

Sara, 20, and Fatima, 19, two sisters, were months away from university entrance exams when their school was closed, preventing them from graduating from high school.

Both explain that with the death of their father from Covid-19, they have no choice but to start looking for a husband.

“My conscience tells me that it is better to get married than to be a burden on my family,” Fatima says.