Britain's Prince Harry thanked the city of Düsseldorf and the Bundeswehr for their willingness to host the Invictus Games 2023. 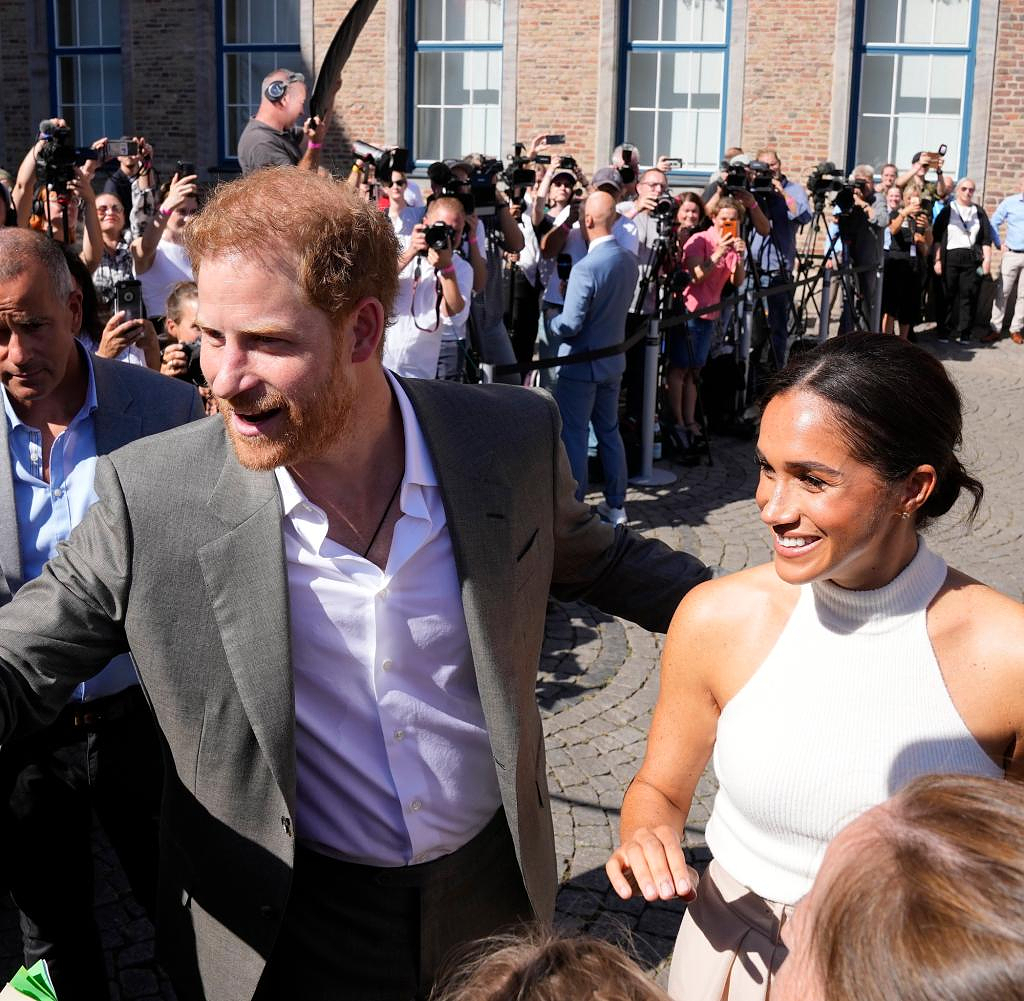 Britain's Prince Harry thanked the city of Düsseldorf and the Bundeswehr for their willingness to host the Invictus Games 2023. Harry said he was "eternally grateful" for their great commitment on Tuesday in a short speech at Düsseldorf City Hall. Harry and his wife Meghan were welcomed by several hundred cheering fans in the sunny state capital at noon. The couple traveled to Germany to promote the Invictus Games, the competitions for war-disabled soldiers, which will take place in a year's time.

The official program of the duchess and duke started in the town hall: both signed the city's golden book, were received by prominent guests and Harry gave a short speech. Afterwards the two took their time for the waiting fans, talked to the people, shook hands and gave autographs. Apparently, a small dog wasn't quite as happy about the visit: it barked at the two. Harry asked if he was friendly - and only then went on.

During their visit to the summer state capital, the Duke and Duchess were not only close to the people, but also quite casual: Meghan wore a white ribbed halter top and beige wide trousers. Harry came in a gray suit but didn't wear a tie. The Invictus Games is an affair of the heart for the prince and dates in this context are one of the few occasions on which he and his wife still make public appearances.

The 37-year-old prince said in his speech that he could assure from his experience that the encounter with the participants of the Paralympic sports festival was extraordinarily intensive. "We can learn so much from them and also grow from them." In their stories, however, one can often recognize oneself. He invited all German citizens to take part in the competitions for war veterans in the coming year.

Among the guests in the town hall was the chair of the defense committee in the Bundestag, Marie-Agnes Strack-Zimmermann. She was pleased "because the Defense Committee of the German Bundestag, under our leadership, managed to get the Invictus Games to come to Germany." It was a long process. And it is a great pleasure that her hometown of Düsseldorf can host the competitions next year. "The fact that Prince Harry is patron is super important for the soldiers. Of course, it's gratifying that he's coming now," added the FDP politician.

As a young man, Harry himself served in a crisis area in Afghanistan. When the British press found out about the operation and reported accordingly, it was withdrawn for security reasons. A soldier who had lost an arm and a leg to a bomb attack while on patrol was also on the plane he was flying back to England in. These and other encounters are said to have contributed significantly to Harry co-initiating the Invictus Games.

The first games were held in London in 2014. Orlando followed in 2016, Toronto in 2017, Sydney in 2018 and this year The Hague. In 2023, Düsseldorf will be the first German city to do so. The topic has become depressingly topical as a result of the war in Ukraine.

‹ ›
Keywords:
TexttospeechNordrheinWestfalenDüsseldorfKönigshäuserGroßbritannienPrinzSchmuckBundestagTorontoLondonUkraineSydneyOrlandoSussexBundeswehr
Your comment has been forwarded to the administrator for approval.×
Warning! Will constitute a criminal offense, illegal, threatening, offensive, insulting and swearing, derogatory, defamatory, vulgar, pornographic, indecent, personality rights, damaging or similar nature in the nature of all kinds of financial content, legal, criminal and administrative responsibility for the content of the sender member / members are belong.
Related News