Post a Comment Print Share on Facebook
Famagusta
DOLLAR 18,65
EURO 19,69
GOLD 1.079,54
BIST 4.950,67
Four reasons why we need this robber
What these introductory sentences really mean
Federal states agree on rules for more control at ARD and ZDF
"When the unspeakable comes to light, it's political"
That devil is damn lucky
"The sentence 'I am as I am' is a license to ignorance...
The story of a double alienation
"There is more than one gender and fewer than two"
Maximum far away from Hollywood
Meta threatens to remove all messages from Facebook

Flowers and tears for the 20th anniversary of the Bali bombings

Families of victims, survivors of the attacks and embassy officials, some with flowers, took part in a ceremony in Kuta, the tourist resort in Bali where Islamist militants linked to al-Qaeda set off bombs in a box of night and a bar on October 12, 2002. 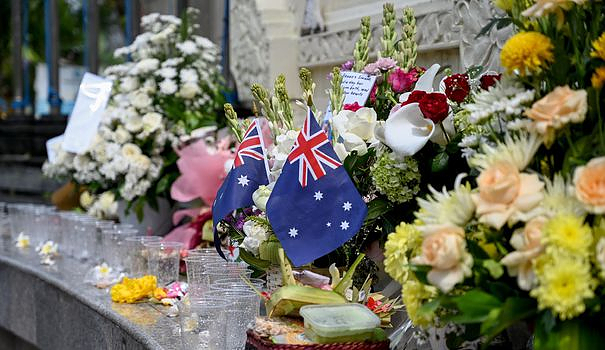 Families of victims, survivors of the attacks and embassy officials, some with flowers, took part in a ceremony in Kuta, the tourist resort in Bali where Islamist militants linked to al-Qaeda set off bombs in a box of night and a bar on October 12, 2002.

"I understand that some have forgotten what happened 20 years ago, but there are still real victims, there are children who lost their parents in the explosions," Thiolina told AFP. Marpaung, one of the victims.

Twenty years after the attacks, this 47-year-old Indonesian still suffers from eye injuries. Desiring that the victims do not "fall into oblivion", she was one of the organizers of this ceremony.

A vigil of homage to the 202 victims must be organized by their relatives on Wednesday evening in front of a monument located on the site where the Sari club and Paddy's Bar were located, hit by the attacks.

Most were vacationers, from more than 20 countries. But Australia, whose 88 nationals died, was the most affected.

Australian Prime Minister Anthony Albanese recalled during a ceremony in Sydney that the atrocity of the attacks had been accompanied by incredible acts of courage.

"They tried to sow terror, but people rushed to do what they could (to help) friends and strangers alike," Australia's prime minister told a crowd gathered in light rain on the beach. Coogee Beach.

A release of 88 doves marked the ceremony - one for every Australian killed.

The Bali bombings left an indelible mark on Australia's national identity, he said, along with the deadly battle of the Dardanelles during the First World War.

In Bali, the Australian consulate also organized a ceremony.

Indonesian President Joko Widodo is due to address families by video during the day and former Australian Prime Minister John Howard, who led the country during the attacks, will deliver a speech.

In Canberra, Foreign Secretary Penny Wong took part in a ceremony in Parliament.

The attack in two tourist establishments was attributed to the Indonesian Islamist organization Jemaah Islamiyah (JI), linked to Al-Qaeda. Another explosive device was also detonated in front of the American consulate in Bali but caused no casualties.

Indonesia, the largest Muslim country in the world, is struggling with extremist movements that have carried out several attacks since the attacks in Bali. The security system had been reinforced before the commemorations.

The main perpetrators of the attacks were executed, killed by the police or imprisoned.

But in recent weeks preparations for the early release of Umar Patek, the "explosives expert" in the bombings, have sparked protests from Canberra, the victims and their relatives.

Paul Yeo's brother Gerard was killed alongside five other members of Australia's Coogee Dolphins rugby team who had left for an end-of-year trip to Bali.

"I was asked to identify him. I was torn between whether what I was about to see would haunt me forever and the opportunity to see you for one last time," he said. declared at the memorial.

"I've never been so scared."

Ben Tullipan, who lost both his legs in the blasts, said he still feels guilty for having survived 20 years later.

"I think of all those who didn't make it, and what they could have become," he told Australian ABC radio on Wednesday.