Five years after the Bangladesh exodus, Rohingya schoolchildren must sing the Burmese anthem 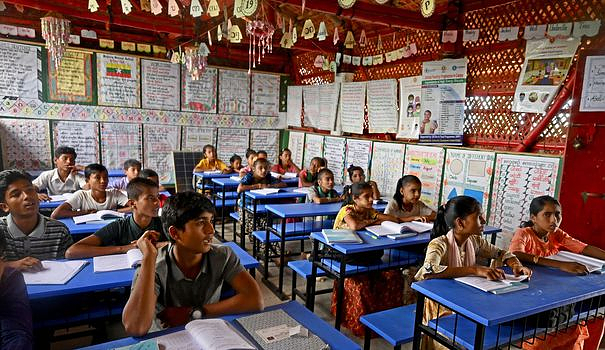 Hundreds of thousands of children present in the camps in the south-east of Bangladesh have had little or no schooling.

Last month, the Bangladeshi authorities accepted that Unicef ​​is stepping up its education program which must gradually become accessible to all children.

They refuse to return to Burma, which is predominantly Buddhist, until they have obtained citizenship rights of which they are deprived.

The hope of seeing them return home was dimmed more than ever with the military coup in Burma last year.

Bangladesh fears encouraging the influx of Rohingyas from neighboring Burma and perpetuating the presence of hundreds of thousands of others.

The Bangladeshi government fears "that with the education of the Rohingyas, Burma will conclude that Bangladesh will eventually integrate the Muslim minority", explains to AFP Mahfuzur Rahman, a former Bangladeshi general, in office at the height of the crisis. Exodus.

And the Bangladeshi authorities are clinging to the prospect of their repatriation.

The school program, modeled on that of their country of origin and taught in Burmese, "reminds them that they are from Burma where they will return one day", underlines Shamsud Douza, assistant commissioner for refugees, to AFP.

For the same reason, explains Mr. Douza, children must sing the Burmese national anthem every morning at school even though they are stateless and Burma is being prosecuted for genocide by the highest UN court. .

But Mohammad Yusuf and his classmates turn this obligation into a claim of citizenship addressed to Burma.

"Burma is my homeland. The country did us no harm. It was powerful people who did it. My younger sister died there. Our people were massacred," says Mohammad Yusuf, "it's is still my country and I will love it to the end".

Today, Dhaka “has realized” that a long-term plan is needed, believes Mr. Rahman, in particular to prevent a generation of young men, without education, from hanging out in the camps. About 50% of the refugees present are under 18 years old.

Security in the camps has become a major concern with a sharp rise in crime.

Over the past five years, more than 100 murders have been committed and gang-organized amphetamine smuggling is flourishing.

Rohingya insurgents are also engaged in blood feuds in the camps where dozens of community leaders have been killed.

The young people, without prospects for the future, not having the right to leave the camps or to work, are given over to boredom. They are easy recruits for all kinds of trafficking and criminal activities with dramatic consequences.

All these abandoned youth are "ticking time bombs", says Mr. Rahman. "Growing up in a camp with no education, no hopes and no dreams, who knows what monsters they can become!".

Mojib Ullah, a leader of the Rohingya diaspora, currently in Australia, considers the chances of Rohingyas returning to their country to be so slim that the effort of a Burmese education seems to him quite useless.

"If we don't go back home, what's the point of studying in Burmese? It's a complete waste of time, a kind of collective suicide," he says, "we've wasted five years already. We need education programs. 'international studies in English'.

But that does not prevent the young Mohammad, sheltered in his poor hut, from indulging in a fascinated reading of a work on the brothers Orville and Wilbur Wright, American pioneers of aviation, nor from hoping " fly one day around the globe".