Fires: saving burned wood, a race against time for foresters

There is the shock of images that stick to the retina. 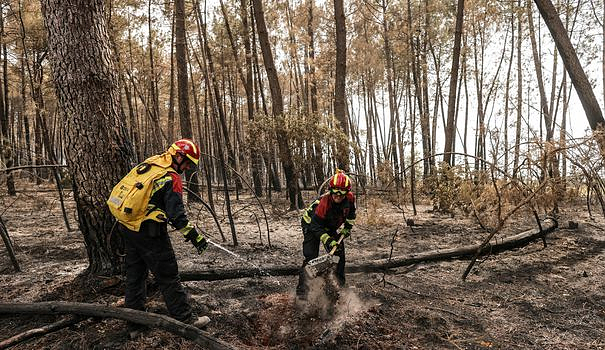 There is the shock of images that stick to the retina. The impact, for individuals, companies and campsites who live and work around the fire. And sometimes, for loggers, the fruit of decades of patient work that literally goes up in smoke. Since the beginning of the summer, nearly 28,000 hectares of forest have been ravaged in monster fires in Gironde and in the Landes. In Landiras, where 13,600 hectares have burned, on the Dune du Pilat (7,000 hectares) or even in Hostens (6,800), where firefighters are still hard at work to control the flames, the economic impact of the fires on forestry is still difficult to estimate.

It is "too early to draw up a balance sheet", explained to AFP the general delegate of the union of foresters of the South-West, Nicolas Douzain, a few days ago, nevertheless estimating that "2 million cubic meters of wood" could be concerned", i.e. "40% of what is transformed annually in the Landes basin". In the New Aquitaine region, the wood industry is indeed a real economic lung. The forest, moreover, represents 34% of regional territory According to another professional organization in the sector, Fibois, foresters harvested no less than 10 million cubic meters in New Aquitaine in 2021, valued for lumber - in particular construction - (50%), industrial wood (40%) and a smaller fraction for energy (10%).The sector generates no less than 9.7 billion euros in turnover, represents 28,000 companies and employs low word 59,000 full-time workers.

If, at the scale of the region, the equivalent of 20% of the wood harvested in 2021 could be concerned, the impact on the departments of Landes and Gironde is much greater, since this is where concentrate the flames. "The Landes massif is usually very productive with many activities dedicated to the wood economy. The economic impact will be very significant, both in terms of quality and quantity. The loss of value that this will generate will be important", estimates for L'Express Jean-Louis Pestour, national fire manager for the ONF.

In order to limit this economic impact, a race against time has started in the Landes to recover as much as possible of the wood that has not yet been completely calcined. This is still valuable in some cases.

“When there is only charcoal left, naturally there is not much to use. then recoverable in wood energy, in chips, in boiler rooms where the combustion is finished. But the use for other uses becomes very complicated. We cannot use this wood in paper pulp for example, because the fire colors wood. In any case, there is a real discount to wood, which loses three quarters of its value", summarizes Jean-Louis Pestour.

If they want to save part of their production, foresters in the Southwest have no time to lose. "Once the wood is weakened by the fire, bark beetle-type insects will swarm on the spot, attracted by these trees. Pest attacks will multiply. There is an urgent need to act", insists the expert. Not easy, while in some cases like in Hostens, the firefighters are still struggling with the fire making human intervention on site impossible.

The situation is heartbreaking for many operators. Due to the duration of the forest's maturation and its growth, the initial investment made by the silviculturists only "pays off" on time scales exceeding a decade. "On the maritime pine which characterizes the Landes, we have relatively intensive cycles, of forty to fifty years, with intermediate clearings between twenty and twenty-five years when the silviculturist uses the wood for energy." Suffice to say that because of the fires that have ravaged several French mountains in recent days, it is sometimes the work of a life that is shaken.

If nothing is lost for the Gironde wood sector "capable and likely to enhance these products", as Eric Constantin, regional director of the ONF in New Aquitaine explained to AFP, the multiplication of fires that will cause the global warming raises obvious questions for wood professionals. "We are entering a period of uncertainty. If we renew the stands, what species of wood can we use? We talk a lot about the species that come today from the South, but no one can say precisely what the climate will be twenty-five to thirty years when we do the thinning. The forester tries to be visionary but it becomes more and more complicated", concludes Jean-Louis Pestour.

In the meantime, the government wants to look at the bedside of foresters. Monday evening, the Minister of Public Accounts Gabriel Attal announced the creation of a "fire unit" and an aid component for individuals, businesses and affected communities. Local tax exemptions or tax payment deferrals are in particular envisaged.

On the side of Bercy, we explain to L'Express that if there is no particular device for forestry, "the instruction has been passed to the General Directorate of Public Finance to review the rental value for the non-built for wooded areas ravaged by fires. These will be taxed as moorland, i.e. the lowest rental value". What loosen the constraint a little.