Even before arriving in the early morning at the offices of New York State Attorney for the District of Manhattan Alvin Bragg, Mr. 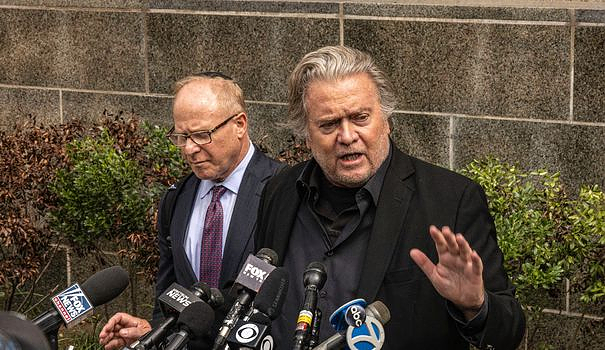 Even before arriving in the early morning at the offices of New York State Attorney for the District of Manhattan Alvin Bragg, Mr. Bannon -- dressed in black, with a three-day beard and salt-and-pepper hair -- had denounced in a statement "phony lawsuits against (him) 60 days before the legislative elections" mid-term on November 8 between the Republican opposition and the Democratic majority.

Welcomed by a forest of cameras in front of the courthouse, Steve Bannon, who then appeared with his hands cuffed behind his back in a court hall, said he was "persecuted" by the New York justice system, including the first magistrates, the prosecutors Letitia James and Alvin Bragg, are elected from the Democratic Party. The man who was an adviser to former Republican President Donald Trump in 2017 castigated "partisan politicization of criminal justice".

“It is a crime to make a profit by lying to donors and in New York you are held responsible for it,” said the prosecutor Bragg during a press conference by revealing the charges, including that of money laundering, against Mr. Bannon and the association “We Build the Wall” which had raised some 15 million dollars in the United States to finance the construction of a wall on the border with Mexico.

This is the estimated amount of "fraud" against "thousands of donors across the country" who believed in "false promises", according to a statement from New York prosecutors.

The wall was a campaign promise of Republican Donald Trump elected president in November 2016 and according to Letitia James, Steve Bannon was "the architect".

"So when Mr. Bannon created a fundraising structure to finance the construction of this wall, millions of dollars were stolen to line his pockets and those of other politically close friends," she accused. .

According to CNN, citing lawyer Robert Costello, Donald Trump's former eminence grise is expected to plead "not guilty" when he appears before a judge on Thursday afternoon.

Figure of right-wing populism in the United States, Steve Bannon, 68, owes his legal troubles to the same case which had earned him in 2020 a first indictment for fraud before the federal justice of the United States.

The former White House adviser was even arrested in August 2020, accused with three other protagonists of having defrauded and embezzled part of the millions of dollars in donor funds to build a wall between the United States and Mexico. .

But Steve Bannon was never tried by a court because he had been pardoned by Donald Trump on January 20, 2021, just before leaving the White House to leave it to Democrat Joe Biden.

The criminal indictment comes six weeks after Bannon was found guilty in federal court in Washington of obstructing the investigative powers of Congress.

He had refused to cooperate with the parliamentary commission of inquiry into the assault on the Capitol on January 6, 2021, this unprecedented attack carried out by supporters of Donald Trump who contested the victory of Joe Biden.

Even after being dismissed from the White House in August 2017, Steve Bannon had remained close to Donald Trump and had exchanged with him the day before the Capitol attack.

The political climate in the United States is increasingly tense, two months before the mid-term legislative elections and two years before the November 2024 presidential election in which Donald Trump plans to run again.

But the Republican billionaire is the target of a number of criminal and civil investigations, including his attempts to overturn the results of the November 2020 presidential election and his role in the violent assault on his supporters on January 6, 2021.

On Saturday at a campaign rally in Pennsylvania, Mr. Trump called Joe Biden an “enemy of the state”, in response to his Democratic successor who had portrayed him Thursday as a threat to the “Republic”, democracy and "the soul of America".