Although the Fiestas de San Isidro have been going strong for the past four days, they are now slowly coming to an end. 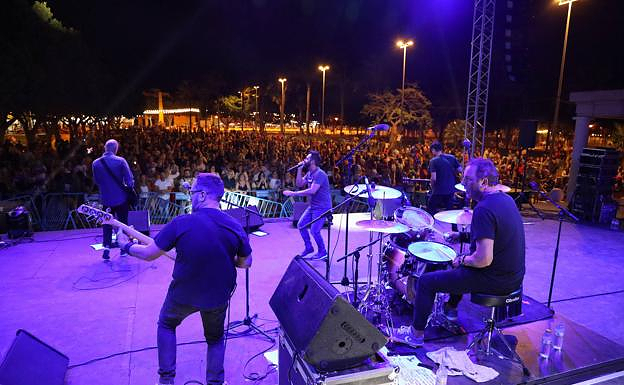 Although the Fiestas de San Isidro have been going strong for the past four days, they are now slowly coming to an end. The weekend began with an increase in attendance at the Midday Fair, at the booths at night, and around the fairgrounds.

Even though the Midday Fair was once more a gathering point at one in the afternoon it was already around two or three-thirty when most people started to arrive eager to enjoy the music, toast the Big Party reunion, and have fun with their friends in a setting of normality where they can forget all about the past.

Many people connected up for the second day of the Midday Fair. The fair was over for an hour, with most booths closing to allow organizers to reopen and start the longest night.

Last night, the municipal park was again a place to gather and enjoy music in the open. The performance of 'La Banda del Capitan Inhumano' attracted an older audience that was reminiscent of themes from Los Inhumanos or La Banda de Capitan Canalla. Last night, the themes were again brought up and many sang loudly in chorus. It was a journey through the best of Spanish pop. A time to end the San Isidro billboard with open-air and free concerts.

The XXIV Pyrotechnics Festival was also concluded. It ended with the performance by Pirotecnia Pibierzo, a company from Villaverde de la Abadia. This show, which contained more than 160 kilos gunpowder and included a variety of pyrotechnic effects.

Eight Human Statues are welcome to the park

Today will see the traditional mass and procession through the streets as part of the celebrations in honor of San Isidro. The events began earlier.

I will not go into detail, but yesterday was one of my most memorable moments of the weekend. Just a few minutes later, San Isidro was taken from the altar and placed upon the throne, where he will be processing this afternoon.

The offering of bread, oil and ears of wheat, along with other products of the earth, to the patron saint of farmers was made immediately afterward.

The same was true for the Brotherhood, which, after two years of inactivity, could see its Saint on throne again and will be able tomorrow to walk it with thousands of faithful along the streets of the city.

Francisco Gongora (the mayor of El Ejido), and Julia Ibanez (the Councilor for Culture), attended the event, as well Angel Escobar, Vice President of Provincial Council. The councilors from the municipal group Vox Montserrat Cervantes Cervantes and Beatriz Sánchez.

At six in the afternoon, the floral offering to San Isidro took place. It included yellow roses that will be part of the decoration for the throne, in which the image will parade.

San Isidro Labrador is leaving the parish which bears his name, built between 1952-54. Once the mass in his honour has ended, he will be gone.

The procession will start on Divina Infantita Street and continue to the Plaza de la Constitucion. It will continue along Carrera de San Isidro Calle San Isidro and Carretera de Pampanico, until it reaches the Boulevard. Finally, it will return to the Church via Calle Lobero.

‹ ›
Keywords:
EjidensesMuestranGanasRitmoPareIsidro
Your comment has been forwarded to the administrator for approval.×
Warning! Will constitute a criminal offense, illegal, threatening, offensive, insulting and swearing, derogatory, defamatory, vulgar, pornographic, indecent, personality rights, damaging or similar nature in the nature of all kinds of financial content, legal, criminal and administrative responsibility for the content of the sender member / members are belong.
Related News