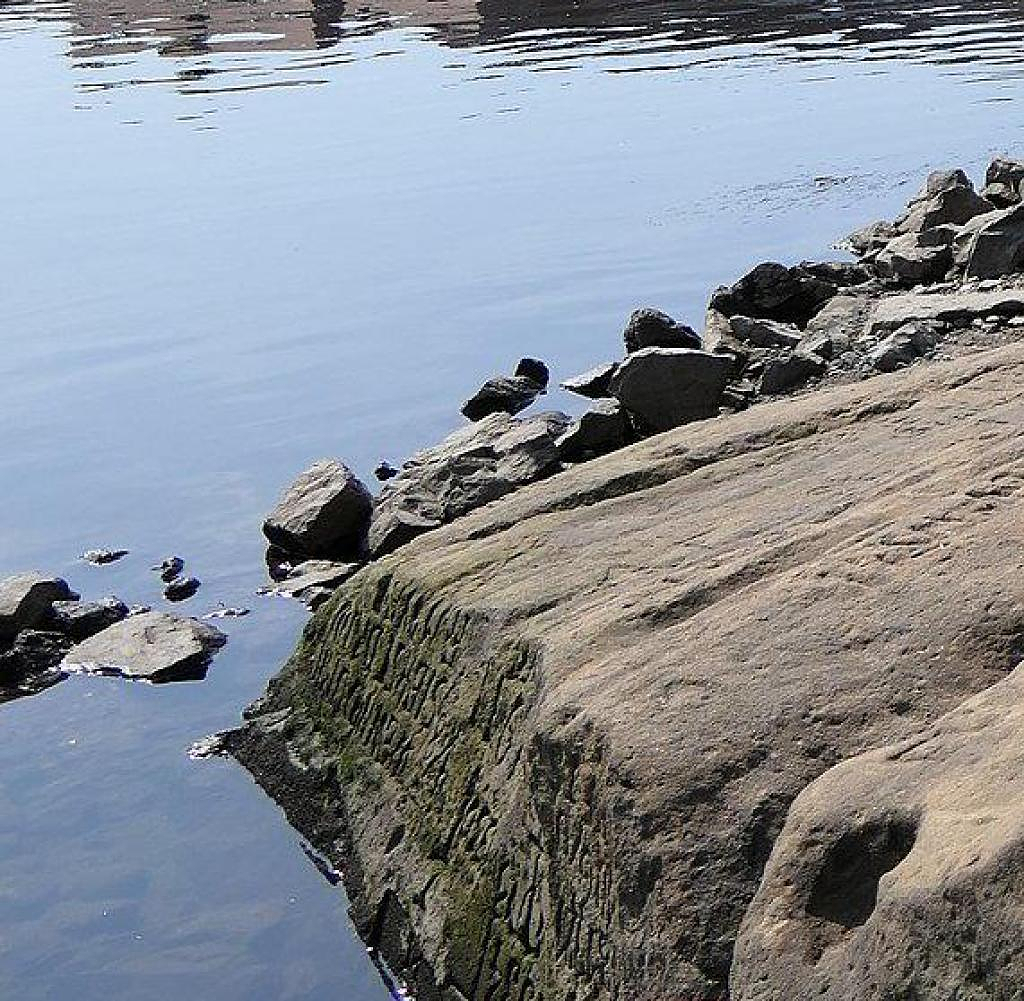 It is a strange sequence of dates: 1616, 1746, 1790, 1801, 1842 are emblazoned on a large stone that lies in the Elbe near Decin (Tetschen) in the Czech Republic, not far from the Saxon border. The inscriptions commemorate years that became special because "the water level of the Elbe was extraordinarily low," reported the "Illustrated Kronen-Zeitung" in August 1906, when such a weather phenomenon once again unsettled people. "Because these boulders are called the 'hunger stones'," the paper explained, citing a famous inscription as justification: "If you see me, then cry!"

For centuries, the appearance of a hunger stone in a river bed was a sure sign of imminent distress. Because the prominent blocks only protruded from the water if it hadn't rained for a long time or if the inflow had dropped dramatically. However, the drought threatened crops, river traffic and, in extreme cases, the water supply in general. While the carvings for water levels marked floods, the graffiti on the hunger stones reminded us that the opposite could also have fatal consequences.

Such worries are foreign to the present-day German citizen who is supplied by waterworks. The astonishment at the strange messages on stones that can currently be seen in the river beds is all the greater. Not only in the Elbe, for which the existence of a large number of these records is documented, but also in the Rhine, where extreme lows are also currently being measured. Markers with the years 2015 and 2018 also serve as a reminder that the drought phenomenon has occurred more frequently in recent times.

However, extreme levels were already being measured at a time when the word “climate change” had not yet been found. The poet Erdmann Höra summarized his impressions of the “hunger year 1947” in verses. Back then, three cold waves froze 60 kilometers of the Rhine. Shipping came to a standstill and with it the most important means of transport for coal and food. “Only hunger touched us then. We no longer longed for roast meat and gravy, only potatoes, even if they were quite green. How could we possibly survive. What did the wife and child eat? We walked far, far out into the country. Maybe there was even a friend there? Was there anything else to eat there? Unfortunately, some only dreamed of it.”

1893 was another such year. At that time, the newspapers headlined “The Elbe is all gone” and reported an “unprecedented drought”. On the Main, too, fears about the harvest were already rife at the end of winter. The potatoes froze in the cellar. "The earth seems to have changed its position in space," wrote a local paper. "Christiansund in the far north reports 4 degrees heat and Maine reports 33 degrees cold."

After a few spring-like weeks, dry weather set in in April and lasted into June. Livestock had to be sold, grain wasted away in the fields, forest fires broke out, and feed prices rose immeasurably. At the beginning of June, the "Hammelburger Journal" finally reported: "In Wiesenthal near Lengfeld, a farmer hanged himself out of desperation because he was no longer able to feed his cattle." Three farmers in the Ebern area also saw no other way out, "there they feared the demise of their entire household due to the prevailing lack of food and became mentally disturbed".

Authorities attempted to alleviate the hardship by allowing the carriage of "truckloads of fodder, potatoes, seeds, and hay and straw at one-third reduced rates of normal freight." Traders who "want to abuse the current situation of small and large farmers to buy their cattle from him at ridiculous bargain prices" were also reminded that "this is covered by the law". Although interest-free loans were granted, their short duration was met with severe criticism.

Although chroniclers, not least with reference to the hunger stones, recalled that extreme drought had almost dried up the river in previous years, a meteorological debate began. According to an article in the Linzer Tages-Post of September 1893, the low water was declared to be the harbinger of climate change, which would result in a steady “decrease in rain in Europe”.

However, the author, the scientifically trained publicist Carl Falkenhorst, argued against this explanation with reference to the measured precipitation reports. Instead, he saw "human activity" as the cause of the extreme water levels. The channeling of rivers, deforestation, and the loss of natural "water reservoirs" have led to faster runoff of rain and snowmelt.

The hunger stones that now rise from the depths have many such tales to tell of people tearing their eyes from the drought.

‹ ›
Keywords:
TexttospeechKulturgeschichteHungersnöteHungersnot (Geo: Ukr)TrockenheitenDecinHungersteineHammelburger JournalElbeGesundheitEuropaFelsblöckeRheinTetschenFacebook
Your comment has been forwarded to the administrator for approval.×
Warning! Will constitute a criminal offense, illegal, threatening, offensive, insulting and swearing, derogatory, defamatory, vulgar, pornographic, indecent, personality rights, damaging or similar nature in the nature of all kinds of financial content, legal, criminal and administrative responsibility for the content of the sender member / members are belong.
Related News