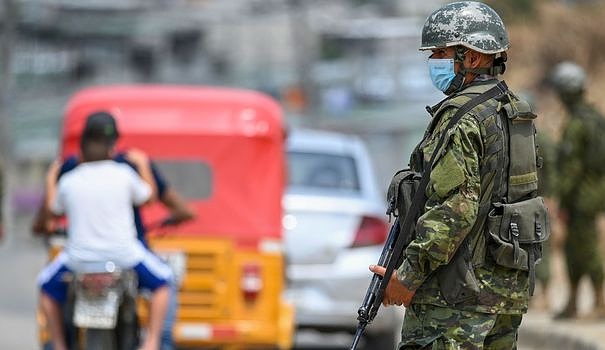 The city of 2.8 million, which hosts the final of the Copa Libertadores 2022, the South American Champions League on Saturday, is facing unprecedented violence that begins in the streets and extends into prisons .

Since the start of the year, 1,200 murders have been committed there, 60% more than in the same period of 2021, according to official figures.

The government is trying to regain the upper hand by establishing periods of state of emergency to mobilize troops and has further increased the security forces by more than 1,100 to 10,000 in the city.

But "today in the streets we have to face automatic rifles, grenades, explosive devices. The violence has increased enormously," police commander Luis Alfonso Merino told AFP. "Before, we weren't faced with that".

Located between Colombia and Peru, the largest cocaine producers in the world, Ecuador was once a mere transit route.

But traffickers settled there, Guayaquil becoming a shipping point for hundreds of tons of white powder to Europe and the United States.

The country's dollarized economy has attracted the covetousness of Mexican cartels who manage all of the cocaine business, from production to shipment, and profit from the Ecuadorian authorities' lack of gang preparedness.

At the entrance to the Socio Vivienda II district, one of the most dangerous in the city, armed police stand guard while a squad of about twenty men, balaclavas and bulletproof vests, roam the alleys on motorbikes. where some 24,000 people live.

In a house, where they enter by force, they find neither weapon nor drugs but three young people with tattooed arms of the inscription "Tigueron", the name of a dreaded gang. Not enough to stop them though.

In the neighborhood, shootings between rival gangs, which appeared from 2019, are more and more frequent and have even forced the authorities since September to temporarily close certain schools.

"Criminal gangs are more armed than the police themselves," admits Major Robinson Sanchez, chief of operations in the sector.

Organized crime is using "children as young as 10 or 12" as sentries or informants, according to residents and police. As they grow up, they earn the right to get tattoos, but only after committing a crime.

Fearing that their children will be recruited, some families abandon their homes. Barely gone, the gangs are "already settling there", assures a district official interviewed on condition of anonymity for fear of reprisals.

She claims that luxury cars are driving around to drop off or pick up drugs under the very noses of the police.

Because the internal market has also developed and here and there wander "zombies" addicted to a residue of cocaine sold at 25 cents a gram.

Violence has also taken hold in the country's prisons, where 392 inmates have died since January 2021, most of them in Guayaquil.

In this vast penitentiary center, 122 prisoners were killed in September 2021 during one of the deadliest killings in Latin American prisons.

"It is not the state that governs the prisons (...) but criminal organizations with the complicity of agents of the security forces who allow, tolerate and enrich themselves with the trafficking of arms" to the even inside overcrowded prisons, explains Billy Navarrete of the Committee for the Defense of Human Rights.

In the district of Socio Vivienda II, 252 homicides have been recorded since the beginning of the year, compared to 66 in 2021, while in Samborondon, a protected and wealthy sector, only 14 murders have been counted, revealing violence as unequal than the city where 26% of the population lives in poverty.

In the weekend before the Copa Libertadores final between Brazilian clubs Flamengo and Athletico Paranaense alone, which is expected to attract some 50,000 foreign tourists to a western district of the city, there was 21 murders.