This Saturday's windstorm that hit Madrid left a curious victim, Dona Manolita, the central lottery administration in Spain that has sold the most Spanish tenths. 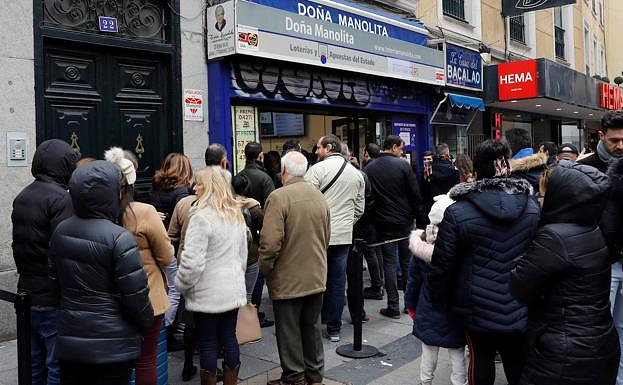 This Saturday's windstorm that hit Madrid left a curious victim, Dona Manolita, the central lottery administration in Spain that has sold the most Spanish tenths. It had to close the day before Christmas draw.

Three firemen from Madrid City Council have arrived to secure the area and prevent cornice from falling onto passers-by.

People who waited to see if fate would be kind to them continue to wait in line this Saturday, waiting for the administration at 22 Calle del Carmen's reopening. They also want to witness the intervention of firefighters in one the most crowded parts of the capital during these dates.

Dona Manolita has installed a system this season to avoid the long lines that tradition-lovers prefer to ignore. They explain to Efe, that the administration will reopen once the firefighters have authorized it, and that it will not close until 8:30 p.m. as it does every other day.

The firefighters went to the commercial street after some rubble fell, but it did not cause any injuries.

According to Efe of Emergencies Madrid, this intervention will likely last two hours more after it began at 11:30 on Saturday.

Following the rainy season, the State Meteorological Agency issued a yellow warning in Madrid this Saturday for wind gusts that could reach 70 km/h in most parts of the region. In the mountains, there is an orange alert that warns that winds can reach 100 km/h.

Since last Thursday, the Retiro Park has been closed along with seven other Madrid parks due to rain and wind.

Yesterday's detachment of the cornice at the Ministry of Culture of the Community of Madrid in Alcala street resulted in the death of a 32 year-old Korean woman who sustained a head injury due to the impact of the rubble.

‹ ›
Keywords:
VientoObligaCerrarDonaManolitaSorteoNavidad
Your comment has been forwarded to the administrator for approval.×
Warning! Will constitute a criminal offense, illegal, threatening, offensive, insulting and swearing, derogatory, defamatory, vulgar, pornographic, indecent, personality rights, damaging or similar nature in the nature of all kinds of financial content, legal, criminal and administrative responsibility for the content of the sender member / members are belong.
Related News