Deux-Sèvres: another 2,000 people gathered against the "basin"

"This morning it's calm but there are still around 2,000 people on the site, I remind you that the demonstration remains prohibited, so that any act aimed at trying again to enter the site of the reserve will again be ruled out", added declared on franceinfo the prefect of the department, Emmanuelle Dubée. 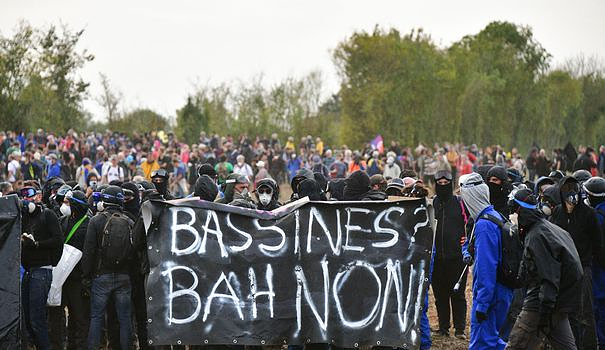 "This morning it's calm but there are still around 2,000 people on the site, I remind you that the demonstration remains prohibited, so that any act aimed at trying again to enter the site of the reserve will again be ruled out", added declared on franceinfo the prefect of the department, Emmanuelle Dubée.

This vast reserve, intended for irrigation, is denounced by its detractors as "water grabbing" by agro-industry, coupled with an ecological aberration at a time of global warming and repeated droughts.

This demonstration, in which several elected environmentalists participated, including MEP Yannick Jadot, had been banned and turned into a confrontation with the 1,500 gendarmes mobilized to prevent the demonstrators from entering the site. After violent clashes, some succeeded briefly before being pushed back.

About sixty gendarmes according to the Ministry of the Interior, and about fifty demonstrators according to the collective "Bassines non merci", were injured in this violence attributed by the prefecture to radical militants.

The gendarmerie system was maintained on Sunday, while a new action of "civil disobedience" was announced for the afternoon by the anti-basin collective, which evokes 3,000 to 4,000 people still present.

The movement of opponents should be long-term, the private land they occupy, loaned by a farmer, being available until mid-May. The construction of a "watchtower" has already begun on the site.

"This will be our basis for the next actions against the site if it were to restart. ZAD or not ZAD, it will be in these terms", declared AFP Julien Le Guet, spokesperson for the collective. calling for a moratorium from the government.

Sainte-Soline is the second of a project of 16 substitution reserves developed four years ago by a group of 400 farmers to reduce their water withdrawals during the summer, thanks to the pumping of surface water tables in winter.

Access to this storage is conditional on the adoption of practices that are more respectful of the environment, but none of the beneficiaries of the first deduction has committed, for the time being, to reducing their use of pesticides.