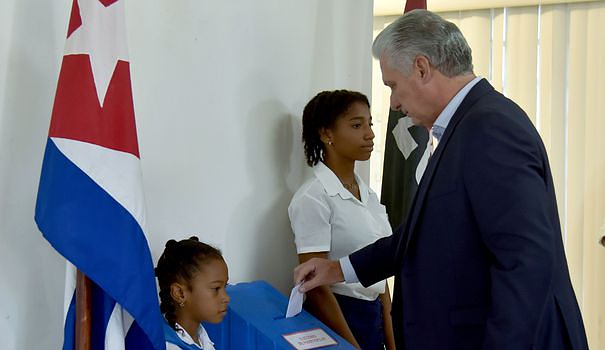 Polling stations closed at 7:00 p.m. (00:00 GMT), an hour later than scheduled, and voting went off without incident.

Authorities said the extension was decided in response to a request from polling stations and voters.

According to the National Electoral Council, at 5:00 p.m., nearly 64% of the more than 8 million people over the age of 16 (out of a population of 11.2 million) called to the polls, had voted.

They were called upon to elect 12,427 municipal People's Power delegates (councillors) from among some 27,000 candidates nominated by voters in a show of hands in neighborhood assemblies.

With the hashtag "YoVotoEl27" ("IVoteLe27), the government had waged an intense campaign on social networks, in the press and on television, both under the control of the ruling Cuban Communist Party (PCC), which does not present any municipal candidates but oversees the electoral process.

The Council for Democratic Transition (CTDC), an opposition platform which promises changes in the country through legal means, had called for abstention under the slogan: "Sin pluralismo,

One of its candidates, José Cabrera, "was elected" to the town hall of Palma Soriano, in Santiago de Cuba (southeast), but later "they began to threaten him with expulsion" and "to make him pressure for him to distance himself from the Council", detailed to AFP the vice-president of the movement, Manuel Cuesta.

Three other CTDC candidates "were prevented from participating by the political police because they had a strong chance of winning", he said.

The Cuban government accuses the oppositions of being "mercenaries" in the pay of the United States.

On Sunday morning, President Miguel Diaz-Canel, returning from an official trip that took him to Algeria, Russia, Turkey and China, voted alongside his wife Lis Cuesta in Playa, west from Havana.

He told the press that the electoral process testifies to the political and social stability of the island, despite the "economic strangulation" imposed by the United States.

These elections are the first stage of a singular electoral mechanism, in force since 1976, and will be followed by parliamentary elections in 2023 and the presidential election at the end of the year.

The elected councilors will form the municipal teams and will propose, among them, 50% of candidates to the provincial assemblies and Parliament, which elects the Council of State and the president of the country. The remaining 50% will be offered by social organizations close to the government.

In theory, the electoral system allows any Cuban citizen to access Parliament. But the opposition denounces the process, believing that with its influence and the vote of its militants and supporters, the CCP has succeeded in ensuring that no opponent is elected.

The deep economic crisis that is hitting the island, with the shortage of food, medicine and daily power outages, and the exodus of migrants could weigh on the outcome of these elections, the first since the arrival in power in 2018 of President Diaz-Canel.

The candidates who did not obtain an absolute majority on Sunday will have to face a second round on December 4.